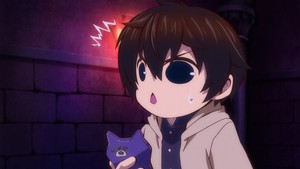 Battle Game in 5 Seconds has been doing okay (for a given value of ‘okay’) with the rapid-fire fights its title espouses the value of, but it makes sense that it would eventually settle in for something a bit more long-term. And so in this episode the scenario moves into its third phase, trading the straightforward combat for more of a battle-royale type setting where the contestants are dropped into an outdoorsy area and asked to procure points. It’s kind of a sudden shift, though not really any more sudden than anything else the series has foisted on us, and it is interesting to see how the story settles in after that for a slower, more detail-oriented construction of what its plot is apparently going to be for the foreseeable future.

A lot of the issues I can take with this development come about as a result of Battle Game‘s writing still not seeming up to the task of telling its story interestingly. With Akira first encountering a brand-new character he could potentially be in conflict with, my mind immediately went to “Oh sweet, they actually have to concoct new ways for him to use his power!”, only to be proven a sweet, blissful fool moments later. Of course the series instead opts to reunite Akira with Yuuri almost immediately, contriving a whole situation which, you guessed it, sets him up to convince everyone involved in the new conflict of his ability to use the Hand Cannon. At this point, it’s downright galling that the author of Battle Game came up with such a unique concept for Akira’s ability only treat it as less something he can get creative with and more a limitation on him utilizing an otherwise much more basic ability.

Similarly, a lot of the setup we’re taken through for this third phase of Mayumi Shintani‘s combat of contrivances has stumbled into the ‘That just raises further questions!’ school of story-building. Apparently, a huge amount of the players involved in the death game were brought into it prior to the crowd we’ve been following thus far, with enough months passing for some to have given birth and for entire rudimentary societies to be erected and compete over resources and recruitment. We hadn’t really been given enough information to speculate on the nature of the program previously, with even Akira himself noting that he still basically has no clue what’s going on here. So introducing all these new elements doesn’t really upset our apple cart of understanding the scenario so much as it simply ensures we remain confused about what’s even happening. When the series was simply asking us to sit back and enjoy some superpower fights, that wasn’t the biggest problem with the show, but now that it’s insinuating that the larger plot might actually be worth paying attention to, it needs to put up or shut up with the world-building.

Now those are all grumbles derived from the series-wide problems I’ve always taken with Battle Game, so let me surprise you with something: I actually kinda liked this episode! Sure the same contrivances and staunch lack of useful information persist, but we’re given so much of that new, still-unconnected info that I was at least able to get sucked into being told about all this new stuff instead of sitting through more tedious explanations of basic battle rules and potentially-useless superpowers. Instead, it focuses on making the most with the framework of what’s already written: None of the new powers we see here are all that interesting (including another spin on the ‘turn a stick into a weapon’ bit) but this one does make clear that powers aren’t locked to a single individual, and there are abilities out there that can be held by more than one person. If Akira’s just going to get his own version of the Hand Cannon ability, seeing him contend with someone who has their own ‘real’ version of that power and still come out on top is a decently interesting setup to work with. Similarly, everyone else’s understanding of that assortment of powers lets them discuss the utility of those being allocated through the formed factions of this phase. Mix in the points system they set up that fuels these upstart societies, and we can see how the third phase is actually the most unforgiving battle game of all: Capitalism!

That potential to be a societal microcosm ripe for some kind of commentary is basically where stories like this should best hope to go, and if Battle Game isn’t something I expect to be especially insightful, it at least looks like it could be entertaining. The idea of a selfish group of antagonists carving out their own kingdom within a death game setting that they have no intention of moving on from is a solid concept, providing an effective contrast that makes even a seeming misanthrope like Akira come off as a ‘hero’, if only by virtue of comparison. We also seem to finally be getting an opportunity to see how Akira’s mind works outside of the whole analytical gamer angle, entertaining the question of ‘why’ he does things in this game or allies himself with certain people, and how his desire for free will and uncompromised control of his situation factors into that. The show wants to convince me that he’s some kind of super-smart keystone this whole setup could hinge on, and I feel like this is the first episode where they kind of got close to properly depicting that.

As well, the whole show just has noticeably more energy to its looks this week. Perhaps it’s the shift to the forested setting, but there’s just much more color and life in the presentation. The characters are more prone to funny faces and entertaining reactions, and there are bits like Yuuri’s arrival that feature some energetic character animation. I’m not sure if more time spent working on this thing allowed the various studios involved in it to synch up a bit better or what, but Battle Game being nicer to look at makes it easier to be more receptive to the story it’s presenting, itself helped along by there simply being more going on now. It’s still not especially clever and it feels like any semblance of sense to it could collapse at a single poorly-written moment, but for the time being, I feel like I am at last able to settle back and blithely enjoy the show the way it’s clearly wished I could.