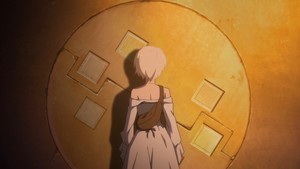 We have an answer about that whole “how did Jeanne d’Arc commission something five years after her death” thing, and it’s probably one I should have thought of before: after Jeanne’s death, several women came forward claiming to be her, most likely in the sense that her soul or spirit transferred bodies. One of those was Jeanne des Armoises, who was actually accepted by Jeanne d’Arc’s brothers as the real deal – and she was definitely traveling with them in 1436. Things didn’t necessarily end well for her as far as masquerading as La Pucelle, but she wasn’t executed, married, and had children. So she is much more likely to be Fena’s many-times-great-grandmother, which may explain how Fena knew how to find her tomb (and one that looks rather like that of her husband, Robert des Armoises) deep in a temple/mine complex in the cliffs of Orléans. That’s a use of largely overlooked history that I can get behind, even if there’s some implication that one or both Jeannes were witches, a misogynist accusation leveled against powerful women throughout history.

Also awesome on the history front are the names of O’Malley’s pirates. Previously I think we only knew Anne and Charlotte, which are common enough names, especially in the 18th century, but this week we find out that not only is O’Malley’s first name Grace, definitively linking her to Irish pirate queen Grace O’Malley, but that other members of her crew are Mary, Ching, and Alvida, making it clear that all of them are references to famous female pirates: Anne Bonny, Charlotte du Barry, Mary Read, Ching Shih (Cheng I Sao), and Alvida (Alfhildr). We have definitive proof that most of them existed; Medieval Danish pirate Alfhildr (often anglicized Alvida) may not have and there’s an excellent chance that Charlotte du Barry was made up out of whole cloth by writer/publisher Edward Lloyd in order to sell more copies of his History of the Pirates. Honestly, these are the kind of pirate historical references that I am here for, and have been since I read Treasure Island way too young and spent many hours playing the Monkey Island games. (You can read about all of them and a few more in the book Booty! by Sara Lorimer.) None of them necessarily seem to have a lot in common with their namesakes – although Mary Read did love a good looking man – but both their names and the archaic French on the tomb doors indicate that someone really paid attention to history when creating and writing this show.

Regretfully, they aren’t quite as good at the whole plot thing. Last week Joan of Arc was thrown into the mix and this week we find out that she’s somehow tied to the legendary city of El Dorado, the fabled city of gold. (Or Mysterious Cities of Gold, because this show is apparently all about referencing my childhood. My sisters and I used to get up at 4:30 to watch that.) While there’s certainly a link between pirates and gold – although honestly the closer link is conquistadors, but they’re basically asshole privateers on land – Jeanne d’Arc and gold feels like a slightly less brilliant connection. Although finding El Dorado would have helped France defeat England once and for all, so maybe not. But in any event, that’s what the mysterious brick of clear stone was for: when paired with two others, it gives the coordinates for El Dorado. Not that the gang knows that until O’Malley and her crew show up and steal both the coordinates and Fena, because in yet another throwback to The Mysterious Cities of Gold, Fena is apparently like Zia and is required to find the city.

I’m torn as to whether this is poor plotting, a tribute to that earlier show, or just someone throwing a bunch of elements into a pot and baking at 350 for thirty minutes until the show is done. It certainly is relying on a rare lapse on the part of the Goblin Knights, who have to not notice Fena wandering off on her own until it’s too late. That seems especially odd on the parts of Shitan and Yukimaru, both of whom are extremely aware of Fena for their own reasons; in fact, it seems to be Shitan’s entire job to keep an eye on her and Yukimaru. (And possibly to do something he doesn’t like, if his reaction to the missive from his older brother Kei and the priest is any indication.) The twins I can understand getting distracted, and Karin is either talking incessantly or being distracted by a technological problem, so she also makes sense. (Makaba I don’t have a good sense of.) But the other two? It feels too much like a screaming plot twist rather than a believable action on their parts.

Whatever the case, at least we now know why everyone is so keen on Fena – fabled cities of gold caused a lot of harm back in the day. Right now O’Malley seems to be winning, having both coordinates and Fena in her grasp. But we know Fena’s dog has sniffed her out once before, so if Yukimaru and the others can get themselves out of the temple mines, Grace O’Malley and her crew had better watch their backs.