Home » Episode 5 – The Great Jahy Will Not Be Defeated!
Anime

Episode 5 – The Great Jahy Will Not Be Defeated! 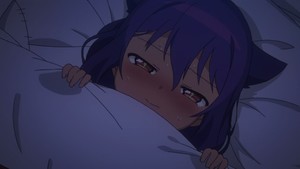 Episode 5, “The Great Jahy Isn’t Suspicious?!” starts off at Craft Pub Maou with that good, good Wii eshop-esque soundtrack that we’ve all come to love. But, post-OP, it quickly becomes apparent that Jahy’s peaceful, meager life is about to get upended by that darn Magical Girl, i.e. her sworn enemy. Of course, it’s not as straightforward as that ands turns out to be a red herring of sorts, but hey, the joke isn’t explicitly transphobic, which… men in outfits usually are in anime. Kudos to The Great Jahy for just playing it straight and having her react to it just not being the Magical Girl she expected, rather than, “Ew, men in dresses, ew!”

But that’s not the funniest thing in this episode: the funniest thing is that Jahy, the great and powerful and intimidating and imminently strong Jahy… catches a common cold, and y’all? It’s comedy gold and once again, makes Jahy a really relatable character. She’s become one of this season’s most funny heroines, specifically because while she seems to be all tsun, and no dere, she’s actually the opposite of that, and is actually quite deredere, with only a touch of tsun to be found.

So much of the enjoyment of this series are things like this: Jahy being brought down to the level of her underlings, or, more realistically, to the level of her landlord, is consistently funny, not because the show is picking on Jahy, but because she’s ultimately just like everyone else, no matter how might and lofty she once was. And actually, it makes Jahy’s desire to regain her power and restore glory to the Dark Realm even more agreeable because y’all? When I tell you I want Jahy to reclaim her power and retake the dark realm and maybe even Earth, I mean it.

An aside, but one thing that occurred to me during this week’s watch is how little Jahy is sexualized at all. None of the comedy comes from her body, which is an easy target given her outfit of choice. If anything, Jahy’s just known for her outfit, but not necessarily sexual because of it. It’s just something she wears that makes her stand out to others. And to the shows’ credit, Jahy hasn’t been sexualized in either of her forms. I’ll admit: I’ve spent the past few weeks waiting for them to make some sort of uncomfortable jab at Jahy’s child form, but… no jabs to be found. And while there’s still a whole heck of a lot of show left to go -which means plenty of time to lewd Jahy- I really think that The Great Jahy Will Not Be Defeated! will avoid that, at least as far as Jahy’s child form. And honestly, I can’t see the show lewding Jahy’s more mature, real body either: I feel like if it was going to do that, we’d have already seen it happen.

Episode 5 was good, and that’s without me even getting into the sudden appearance of the true Magical Girl in the latter half of this week’s episode. It’s a comedy of errors for both Jahy and the Magical Girl, and it’s one of the funniest moments in the show specifically because of their misunderstanding. Also, now that the Magical Girl is finally here, I really hope we’ll see her meddling in Jahy’s life again. I kind of want them to keep dancing around the fact that child Jahy is the same as adult, second-in-command of the Dark Realm Jahy. It would be kind of funny to see the Magical Girl glom onto Jahy, though I get the feeling that she’ll find out sooner, rather than later. With my luck, it’ll be next week, though since I haven’t gotten volume one of the manga (I know I said I would but… time and monies) I can’t really conclusively do more than just guesstimate.

Bonus points to this week’s after credits scene, which was a WWE-esque (well, more like a very specific Japanese female pro-wrestling) sequence that pits Jahy against her landlord in a battle for the rent. It’s the physical manifestation of a millennial who’s like, forever behind, and I loved it. It’s pure fun, and while I won’t spoil the ending, I was incredibly pleased with how this little mini-animation turned out. I’m going to try and make sure I comment on these as much as I can, going ahead.

If you aren’t already working with a full watchlist, I highly suggest adding The Great Jahy Will Not Be Defeated! to your list. Heck, if you’re watching almost every single show this season (I work with someone who routinely does watch almost everything, so… shoutout, Peter) then you need to make sure The Great Jahy is one of those shows. At only five episodes (out of a total twenty-four since this is a two-cour series) it’s still early enough to jump on. Mind you, the premiere doesn’t lay the best foundation for the series: even a handful of episodes later, I still find it largely unfunny, though I see what it’s trying to do. This week’s episode, however? Pure comedic gold with a heck of a lot of heartfelt moments that cement Jahy’s place in the pantheon of brown skinned anime girls who are pretty darn great.