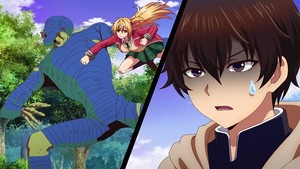 I should have known that the honeymoon of Battle Game in 5 Seconds‘s uptick in animation quality from last week couldn’t possibly last. There’s a smattering of additional instances of funny faces in this episode, but for the most part we’re back to awkwardly-modeled slide-shows, static textures, and odd color overlays. However, the most jarring inclusion has to be finally getting a full look at what CGI animation Studio A-Cat can contribute to this production, in the form of the truly horrendous CG-animated ‘Ghouls’ the characters take on this week. They’re awkwardly-puppeteered repeat-modeled monstrosities, and everything about their inclusion makes me question why the team didn’t simply animate them as traditionally as the other flat, 2D characters populating this thing. Did the production schedule really snap back to a rush of limited resources after the modicum of extra care expended on last week’s episode? Who knows, all it means is that we’re back to Battle Game looking as choppy as we’d previously come to expect from it.

But how’s the plot holding up outside of the visual issues? I can happily report that the situational update continues to make Battle Game decently engaging compared to its previous arcs. The key components compelling the content in this episode revolve around the show’s established fixation on sussing out and codifying the characters’ powers. I think most of us guessed at last week’s cliffhanger that Akira’s attack on Shirasagi wouldn’t take, but even with that kind of stock setup, it lends an effective “Who is this guy?” tone to all the proceedings around him. Alongside that – be still my beating heart – Akira actually starts experimenting with alternative uses for his Sophist power! It’s neat to see it deployed as a utility to allow him and Yuuri to communicate in secret and, more importantly, save the animation team from having to animate any lip-flaps.

Seriously though, even if the broader potential uses of Akira’s power outside of the dang cannon thus far amount to him seeing if he can use it for something other than the dang cannon, it’s still something. There’s an interesting ambiguity to whether Akira is truly endeared enough to Yuuri to trust her, or if he’s simply evaluated that she’s the most effective person to bring in as a device for expanding his ability’s uses. Because this is a remarkably subtle show, they even have him directly remark on “How much harder it is to trust someone else than to get them to trust you”. It works in injecting just a few more of those layers to Akira’s character that we’d started to glimpse last week, thankfully making him feel a little more like a specific person rather than a simple self-insert cipher. And playing off his character, I can’t not be amused by his criteria for using his power requiring that he maintain just enough of an antagonistic air around his current allies to be regarded as a potential threat and enable his abilities.

Unfortunately, the other power-based plot point, the one around Shirasagi, winds up being less interesting, at least for the moment. We spend so much time questioning how his attack-nullifying ability works, even turning it into an in-universe aspect with the villainous Kuroiwa trying to figure him out, that perhaps the potential hype made me expect more than I should have from what this show’s writing has demonstrated of itself before. The idea of damage-cancelling as an enforcement of ‘Peaceful Negotiations’ is a cool one, but then they back off from the more elaborate applications that concept could have to just allot Shirasagi the ability to turn the damage back on his enemies and murder them. It continues to paint Shirasagi as a powerful character in an effective leadership role, but also spotlights the continued lack of creativity that a story like Battle Game really needs to stand out.

So that’s where we’re at. The show’s still holding at ‘decent’ in terms of entertainment value, but only just, especially in the face of the way its production values disintegrated this week. That’s unfortunate in an episode that’s supposed to be anchored by a big group fight, but instead the action has to be carried by the conceptual power-usage stuff that can hold our interest. That’s not as lethal for Battle Game as it might be for other shows, since it’s not like my expectations were sky-high even with the slight bump in the visuals last week, but it does temper even the vaguest enthusiasm it manages to coax out of me. Even as they tease at cool situations and applications to see these superpowers in, I question their ability to deliver in terms of depicting them.