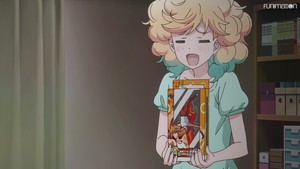 If episodes 1-5 were the prequel manga, then episode 6, “A Glimpse of Stardom,” solidly moves us from that thick boi of an omnibus and into the main story of Kageki Shoujo!!, featuring material that’s completely new to me, and honestly, that’s exciting! It means that the series is ready to move towards a more complex story, now that Sarasa and her classmates’ beginnings at Kouka are fully explored.

Before the plot kicks in for this episode, we get a really tender moment between Ai and Sarasa where Sarasa is gifted a Tsukahara Vault Taku figurine from the local convenience store kuji promotion, which immediately gave me Free! – Iwatobi Swim Club meets Backflip!! Vibes. Naturally, this is everything to Sarasa. It’s definitely a sweet reminder that Ai and Sarasa are not just roommates but also fire-forged friends now, and while they might still press one another’s buttons, their interactions just feel really good to watch.

One of the things about Kageki Shojo!! that I continue to find really appealing is how grounded it is. This show could turn the dial up on the drama all the time, and it would still be really engaging. Instead, we get these really solid classroom scenes with the first years. They’re honestly quite compelling, in part because Sarasa seems to have no limits to her genuine enthusiasm. This, of course, dovetails into this episode’s big event: the girls get to actually do some play rehearsal with good ol’ Shakespeare (specifically, Romeo and Juliet) which sets up some character growth for Chika, one-half of the red-haired Sawada twins. (Fun fact: they’re voiced by actual twins!)

This shift in focus away from Ai and Sarasa is welcome, as Kageki Shojo!! gets to flesh out its side characters (who, to be honest, are less side characters and more major minor characters at this point). Chika is an interesting character to focus on because we really haven’t gotten to see a lot of her thus far. She’s just been one of the many first years in the cast, and when it comes to her time to shine… she kind of sinks into that role by choosing to be the comedic character instead of allowing herself to step into the limelight.

I find this fascinating, in part because Chika is one half of a pair, and probably has taken a backseat to her more perky sister because of the difference in their personalities. You can see it in the deliberate staging of her character, and how she reacts to the notion of choosing roles for their scene study of Romeo and Juliet. Unfortunately (or fortunately, depending on how you like your dramas) episode 6 leaves off on a bit of a cliffhanger, though it definitely promises a lot of development for Chika andKaoru next week. I don’t exactly know where the series will take them, but I sense solid character growth and a few tears in episode 7. (This includes character development for Sarasa, who gets the most soul-crushing news ahead of episode 7.)

Ultimately, episode 6 is a nice shift into the next arc of Kageki Shojo!!, as well as a solid start to the main series content. While I’m sure I’ll read my volume of the manga, I also really enjoyed just being with the characters. There’s something nice about seeing Group E, and Sarasa in particular, develop their acting chops. It all continues to make me want to see Sarasa become a star: same for Ai, who’s absolutely my favorite character in this series. Really, I want to see all of the first year succeed, but I suppose that’s an indication of how solid a show Kageki Shojo!! is. Thank goodness we still have six more weeks with this cour: I couldn’t imagine giving it up yet. There’s still so much I want to see, and I fully believe all of my expectations will pay off. For now… I eagerly await next week’s episode!