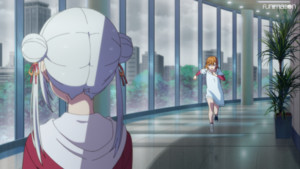 Alright Love Live!, you’ve really gotta stop it with these breaks. For one, every other show this season is revving up for their season finales and you’ve just now hit the mid-season point. For another, all this coming and going is giving me trust issues. You’re the show I’ve been most excited for this summer and every time I feel like you’re back for good, you disappear for a week without a word. It’s inconsiderate, stressful, and actively makes Mondays worse than they already are.

But alright, we’re back with the conclusion to Chisato’s journey to becoming a school idol. These sorts of stories are tradition for the franchise at this point, but in a minor break to the formula, the main thrust of this episode has almost nothing to do with convincing Chi-chan to join her friend in curricular idolatry. In her own words, Chisato says she’s been aiming to join their group from the start – it’s just that her hangup is much more personal and private than most reluctant idols. She’s felt inferior to the brave and confident Kanon since they were kids, and while she appreciates her friend and everything she’s done for her, Chisato also wants to be able to stand on her own, which led her to pursuing dance. As a nifty bonus, that passion also made her a perfect complement to Kanon’s dreams of singing, so this whole time she’s been secretly working to finally return the favor.

It’s a sweet sentiment, but it does mean the actual conflict of this episode is nebulous at best. There’s not really anything concrete for the other characters to do in this setup, as Chisato is basing the whole thing on a dance competition that happens entirely off-screen. There’s technically the chance she’ll lose and decide to study dance overseas, but that’s an option for all of one line that nobody in their right mind would actually believe is a possibility. So the actual resolution of this story relies solely on an emotional revelation, and a fairly subdued one at that. Well, as subdued as this franchise can get, in that Kanon simply hops an overnight ferry back home to talk to her friend in person, rather than chartering a plane and parachuting in or something. She still quite literally clears up the storm clouds surrounding Chisato though, because that’s just what orange-haired girls can do in Love Live!.

I joke, but it’s very cute that, recognizing they were both keeping things to themselves, Kanon’s immediate instinct is to red-eye her way to talk in person. It’s a warm and loving gesture, and the ensuing conversation does well to gently knock Chisato out of her self-imposed mission. Because yeah, relying on and admiring the people you love is nothing to be ashamed of; it’s part of being human. Chisato may focus on what she sees as faults, but Kanon can see all her determination, loyalty, and compassion just fine. That it all caps on another fantastically animated concert doesn’t hurt either. We’ve gotten fewer musical numbers compared to Nijigasaki, for obvious reasons, but that honestly just makes seeing them all the sweeter, if just to marvel at how far the franchise has come over the years.

The rest of this episode is basically just more of the same from last time. Sumire and Keke keep up their rivalry/friendship/flirting, though I like the wrinkle introduced with Keke being both instigator and cinnamon role. There’s also just a ton of fun incidental gags that go totally unremarked upon, like Yuna casually copying Kanon’s stretching while they talk, and that honestly makes them funnier. We also get some hints about Ren, learning she’s not only a talented ballet dancer but a former figure skater to boot. We still have no clue why she’s so adamant about keeping School Idols from sullying the good name of her school, but it’s nice to see she’s got more layers to her than just stuffy antagonism, and her awkward attempt at broaching the topic of Chisato’s transfer papers is pretty funny to boot.

Altogether this isn’t a barn burner episode of Superstar!!, but it’s a solid one that just keeps up the show’s already high batting average. It knows what it wants to do, is so confident it doesn’t make a big deal out of succeeding, and just delivers exactly what it’s been doing so far. Mostly I’m just glad to have it back for good this time (hopefully).

The Supersized Laughs of Love Live! Superstar!! - This Week in Anime