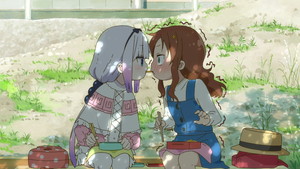 This week’s episode attempts to focus on relationships between the dragons Lucoa and Fafnir and their respective humans but in light of last week’s episode, the attempts feel half thought out instead of adding any real depth to their characters.

The first segment features Shōta and Lucoa. The budding mage is convinced his buxom familiar doesn’t respect him because she teases him constantly. This is a misinterpretation on Shōta’s part because, like when all of the dragons in this show get into sexy situations, it’s due to Lucoa’s own naivety on sexual propriety. It’s probably my least favorite excuse for fanservice because it’s a lazy way to absolve a character of any kind of responsibility or agency in their choices. I’d much rather Lucoa just be horny than dumb and sexy on accident, and that’s not getting into the unlucky victim of her free-spirited nudity is an elementary school age kid.

Anyway, Shōta has had it up to here with the constant melon parade, so he starts asking around for dirt on Lucoa so that he might be able to gain the upper hand in their mage-familiar relationship. What comes out his talks is supposed to be affirmation that Lucoa really does care for him but fails to fully get both characters to understand one another. Of course, doing that would involve Lucoa understanding Shōta’s boundaries and that would mean retiring the running “lucky pervert” gag between the two, so no, that doesn’t happen. The bit about how Lucoa always returns to Shōta when she admits her own insecurity about forming bonds after she was exiled is good, but it’s too short to feel earned.

The second segment disappointed me more though, because I was expecting a “meet the parents” type of scenario which could have honestly been hilarious, not just because of Fafnir but also the double-life Takiya lives as an avid otaku. Instead, we get another talky segment as Takiya tries to find a way to get Fafnir to leave the apartment. It ties into the Lucoa bit thematically (human trying to figure out how to get obstinate dragon to do something) but not quite as insightful, likely because Fafnir is less inclined to be emotionally honest. He does elaborate on his interest in trying out a human-like life, despite how absurd it seems on the surface. I just wish the whole chat came about in a more interesting way in this segment overall.

The last bit is probably the best, if only for all the fluffy, cute feelings. The idea is pretty simple: Kanna and Saikawa go on a day trip after Saikawa’s boastful nature gets her called out. The writing in that scene in particular felt very genuine to the kind of silly one-upmanship that kids often engage in. You can win accolades just by running really fast or being undefeated in tetherball. In this case, one of the girls’ classmates walked all the way to where to rivers meet and now Kanna and Saikawa have to prove they can do it, too. The girls get up to cute kid antics, like a variation of the “floor is lava” before reaching their destination. Saikawa gets a few of her romantic dreams fulfilled, like sharing a meal. Just super cute.

If I had to describe this episode, I’d put it in the “comfy” pile while the first half of last week was mostly “worldbuilding”. I enjoy both for different reasons, but what kept this episode from being great was the first two segments devolving mostly into talky bits instead of introducing unique situations to naturally set-up the emotional moments.