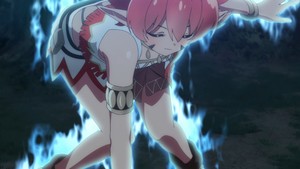 Look, up in the sky! It’s a bird! It’s a plane! It’s Rio dressed like Kirito, flying because we’re supposed to take it for granted that he learned how in the year the show skipped over so that he can get to Yagumo in time for the series to adapt that part of the novels!

I do understand what Seirei Gensouki is trying to do, and not only because dozens of light novel adaptations have done it before this show came along. There are, after all, only so many episodes in a series, and with just the English translation of novels already up to volume sixteen (or soon to be there), that means that the adaptors have to be very selective with what they choose to show us. Adaptation is much more an art than a science, and sometimes you have to make concessions where you can. But from the perspective of Vaguely Grumpy Anime Viewer, this episode tries to do way too much far too quickly, with the result that it doesn’t quite pull any of it off. Part of that is the fact that if you were just sort of drifting along last week, it would be easy enough to miss that year in the story going by, or at least the fact that Reiss and his hapless minion did not spend an entire year just hanging out with a wyvern egg. But also the artistically portrayed passage of that year didn’t allow for us to see the characters changing, so seeing two of Rio’s totally-not-servants hanging all over him and wanting to be “friendlier” with him feels abrupt. More problematic, however, the fact that somehow over the course of one year Latifa managed to forget all of her top-tier assassin skills to turn into a damsel in distress.

Again, there is some small piece of me that can see how this might have happened – she’s safe, warm, and fed for the first time in her life, so it would be easy enough for her to stop thinking about, much less practicing, her moves. But given that last week we saw the other girls in the Rio household fighting and training him, plus the fact that they’re all sent out as the first line of defense this week, it doesn’t make a whole lot of sense that no one would have encouraged Latifa to keep up with her training, because the village is in the middle of a dangerous forest. And since the idea is expressly to make her feel comfortable and like she belongs, treating her like everyone else seems like it would be a no-brainer. And yet Rio still has to swoop in and save the day.

Other inconsistencies in Latifa’s character feel more believable, like the fact that she goes from “I never want to be apart from you” to running away from Rio in about half a second. She’s young, and she was even younger when she died the first time, so she’s acting consistently with her age(s). It is interesting that she and Rio both firmly believe that they’ve been reincarnated wholesale from Japan, though, because the implications within the series have been much more that their Japanese souls are piggybacking on their fantasy selves. That might be a little much for them to process, though, so perhaps they’re thinking of it in a way that makes sense to them – after all, if they came from the Japan of our world, they’d almost certainly know what isekai is and how it often functions as a plot device.

In any event, there is a bit of relief that the Spirit People storyline didn’t last very long. It felt much more humdrum than the Magic School arc, possibly because there just wasn’t as much to work with beyond “Rio is awesomely talented and this time everyone sees it.” Throwing in the space-time storage device just felt emblematic of the whole thing: heavy on the contrivances and light on the interesting stuff.

But now Rio’s got his Kirito Coat, his flying powers, and has just landed outside of a Yagumo village. Here’s hoping that the new story arc has a bit more going for it than the last.