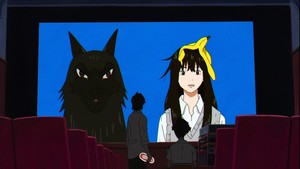 It seems like every week I wax poetic on the way Sonny Boy uses its already weird conceit to strut into even more complicated conceptualizations, so please trust me when I say that this episode is the wildest one yet. In another world, this could have been Sonny Boy‘s finale, and it would have been a bold note to end on—a psychedelic psychological trip that crash lands into a haunting existential coda. Here, however, it demarcates a clean break between the series’ two halves. The official Twitter account just posted a new trailer for “part 2”, which just further emphasizes that this was always part of the plan. The “set-up” phase of Sonny Boy is officially over, although I highly doubt it’ll stop provoking its audience and serving up more questions than answers anytime soon.

This week’s focal world is, fittingly, a theater. Nagara is our protagonist and POV character, so Sonny Boy just adds some diegetic metatextual playfulness here by turning his memories into rows of stacks stuffed with film reels. It’s a fun, almost childish concept. When I was really young, I imagined my life as a story being continuously written into a large book by an omniscient author, and this strikes me as just another version of that. Naturally, Sonny Boy doesn’t waste the opportunity to wax philosophical about this thought experiment, extrapolating its ability to depict the world as it is/was even further into the power to create new realities. It takes on extra significance when you consider the motivations behind making an anime like this (or any ambitious piece of audiovisual media). What is an anime if not a splicing together of many people’s voices and perspectives in the hope of reaching and changing the hearts of others? Note, too, that Rajdhani’s editing only affects the world when Nagara is watching—besides the quantum implications, it also suggests that art only means something when it’s in conversation with an audience. Less seriously, I appreciate the silliness of the out-of-focus sight gag. The show’s persistent visualization experiments don’t always have to be scary or unsettling; they can be goofy too.

We also finally have an antagonist! Maybe! Sonny Boy‘s interrogations have been abstract and complicated enough to not require a traditional villain, but if it is going to introduce one, I can’t think of a better enemy than God. And per usual, the introduction to this new character and concept is largely inscrutable. At least we now know that Dr. Strangelove is behind the voice that has been talking to Hoshi this whole time, but the how and why of their principal’s deification remain a mystery—and not one I necessarily want or need to see solved. Sonny Boy is most interesting as an allegory, so if you use a school as the setting of your microcosm, it makes complete sense to make the principal your stand-in for God. And furthermore, the most pressing question is not why the principal is the way he is—it’s why he’s doing what he’s doing.

Thanks to our new dog friend, we know that this drifting phenomenon is much bigger than this one class, and much longer than the several months they’ve been stuck on the island. I can only provide the best interpretation I can as of this point in space-time, but the classmates we’ve come to know haven’t actually been drifting; they’ve been deliberately pruned from the world. To that effect, Rajdhani had the right idea when he used a director’s cut as a metaphor; the only problem is, he got the identity of the director wrong. God has already made his preferred rendition of Nagara’s class, and they’ve just graduated in accordance with his design. Hateno island is the cutting room floor, and our superpowered student protagonists are the scraps of celluloid littering it.

But is the director’s cut version really the best one? Hoshi kills an animal on the day of graduation. Nagara’s stuck in an unhealthy living situation with a mom who can’t take care of him. Nozomi is dead. Contrast these outcomes with how these characters have grown together since the drifting. There’s been plenty of conflict along the way, but they were able to challenge God’s design thanks to the class banding together in solidarity by the end of it (Aki’s faction notwithstanding). They might have been trapped on the island, but they were still free to fly away from it. In the director’s cut, there’s no such freedom. The students are caged. The pigeon’s wings are broken, so it is killed. Emphasizing that point, Nozomi’s death seems to be the most important departure—the conclusion of the episode flashes back to an alternate version of the moment when the class drifted, instead showing a sullen Nagara opening the rooftop door without any fighting or fanfare. Is it just random chance that our versions of Nagara and the others were banished, or does God weigh the dice in his own favor?

Hoshi’s specific words, that they were not “chosen,” calls to my mind one of the core threads of Kunihiko Ikuhara‘s Penguindrum, which similarly deals with misfit children and the possibilities within alternate realities. In Penguindrum, to not be chosen is to die, and we can infer the island to be a similar purgatorial state for those not “chosen” by God. In other words, Hateno Island is Sonny Boy‘s version of the Child Broiler, where unwanted children are removed from the eyes and care of society. As with Penguindrum, however, salvation can still be found in the outstretched hand of an outcast comrade. Nagara’s power and Hoshi’s ark let them challenge God’s design, and there’s no reason they can’t have another shot at defying fate.

As if there aren’t enough ideas being explored here, Sonny Boy also broaches the time-tested philosophical debate between free will and predestination. Unsurprisingly, Hoshi’s foresight is at the center of the argument, but I think it’s important to note how the argument begins. Nagara’s inability to rewind the film reels leads to the salient observation that we can’t change the past, so it’s healthier to focus instead on creating a good future. This is a synchronous and positive spin on Nagara’s realization last week that he can change the world—and if that’s anybody’s duty, it’s the duty of “youngsters” like him (to borrow Nozomi’s terminology). It’s a good development! Hoshi, however, finds more comfort in the idea that the future is fixed, and we should find meaning in following and preparing for that preordained plan. It’s a self-effacing plea on the surface, but the principal’s questioning earlier in the episode reveals the egotism behind Hoshi’s motivations. But that’s not necessarily a bad thing either! When Nagara proves that he can edit everyone back into their home world, Hoshi immediately switches tack and supports the project, because ultimately he does care about everyone’s “salvation,” even if it doesn’t arrive in the form he expected. And I’m glad this makes Hoshi a figure more complicated than a creepy stick-in-the-mud.

Since I’ve had it scratching at the walls of my mind all week, I might as well compare the episode’s surreal conclusion with Evangelion‘s penchant for the same. While Sonny Boy bakes its dizzying aesthetic acrobatics diegetically into its premise, I think it’s fair to say it owes some of its vision to the experimental techniques within the TV series’ conclusion and in The End of Evangelion. In all of these cases, the imagery thwarts any simple one-to-one reading of the events. It leads to interpretations that will be as personal as they are malleable. My own relationship with Evangelion has changed and matured in countless ways since I first watched it, and I wonder if Sonny Boy‘s abstractions will similarly embed themselves in the minds of its younger audience members. Granted, Sonny Boy is likely doomed to be far more niche than something like Evangelion, but I believe in its potential to make similar waves on a smaller scale. There’s very little else like it in recent memory.

It’s a fool’s errand to predict where Sonny Boy‘s second half will take us. So far, each subsequent episode has refined the students’ understanding of the island, as well as our own understanding of what Sonny Boy is, and these revelations have often flat-out contradicted earlier assumptions. But the series is about that fool’s errand. We’ve evolved to find and interpret patterns, even if there are none. Of course the students thought there had to be some point to their drifting, whether it was a puzzle to solve, a game to win, or a storm to weather. The divine refutation of that assumption comes with a good deal of existential despair, but it’s also potentially liberating. And if there’s one thing I know about anime protagonists, they rarely balk at the chance to beat up God.

Episode 8 - My Next Life as a Villainess: All Routes Lead to Doom! X