Episode 6 – The aquatope on white sand 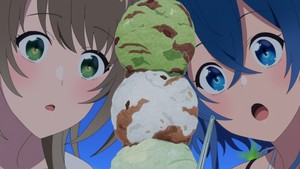 Episode 6, “Sweets Rhapsody” starts off with the rather abrupt announcement that after 48 years, Gama Gama will be closing its doors in the coming August. It’s not necessarily new news – Gama Gama’s financial situation has been in flux since the premiere – yet it hurts all the same, even if you know that things will most likely work out in the end. That tidbit of news also puts the episode 5 deadline Fuuka and her mother decided on (for reference, her departure in September) into sharper relief as we dive into episode 6.

A lot of episode 6 is focused on attempts to help keep Gama Gama afloat. Aside from the fact I have to keep reminding myself that Kukuru is a high school student, it feels realistic enough, and Kukuru’s dedication to Gama Gama shines through here as she takes up for the aquarium in ways no one else can. This includes establishing a food stall at the aquarium, which is the central plot for this episode.

Thus far, The aquatope on white sand has been fairly serious, with the episodes up until now focused on developing the relationship between Kukuru, Fuuka, and Gama Gama. With that foundation firmly established, the show could finally start getting really playful with the girls. Thus, episode 6 is a super-duper iyashikei (healing) episode, full of cozy scenes of Kukuru, Fuuka, and Tsukimi eating ice cream, and later, dipping their toes into social media for the sake of Gama Gama. It’s the sunset-lit beach of anime episodes, and everything is suffused in a halcyonic warmth as Kukuru does her best to keep on keepin’ on. This also leads to one of the strongest scenes in the series so far, where Kukuru opens up her heart and declares her desire to keep Gama Gama going, come what may (well, that and that delicious shaved ice, but that’s because I’m very here for shaved ice. It is hot outside, after all).

A large part of what makes Cozy Vibes Central this week work so well is the sound design. It’s an ambitious mix of ominous sounds, soothing melodies, and atmospheric water noises that evoke all the emotions Kukuru is feeling, reflecting the big, swirling feelings that she’s coping with even during scenes that are decidedly lighthearted. Solid sound design has certainly been a hallmark of The aquatope on white sand thus far, but it’s especially noteworthy here, serving as excellent table setting for this incredibly Kukuru-centric episode. And it’s a necessary episode, if only to add further dimension to Kukuru, and to reaffirm her already overwhelming dedication to the aquarium as a whole.

I’ve come to realize that aquatope is at its strongest when it’s cozy and soothing, and when the sound design digs into those strings and lilting piano sounds to evoke the feeling of water. Even though I really, really want a stronger taste of the magical realism that’s slowly being shaped in the background, I can’t help but look forward to more episodes like this: go nowhere-esque, relaxing twenty-four-minute delights where things slow down and we get to really sit with the characters and stew in their personalities and interactions. That’s what’s going to keep me coming back to The aquatope on white sand from week to week.

That said, I still wish for some of that magical realism. I know, I know, I just spent a paragraph lauding an episode that was essentially the animated form of an AO3 drabble fic, but while I do love iyashikei and the comforting “cute girls doing cute things” scenes that fill parts of this episode, I remain intensely curious about the mystery behind the larger plot. I think that’s because we get to see the Kijimuna (I learned this after a bit of research this week!) in the back third of the episode. But then again, this is a two cour series, and it’s gotta take its time lest it hits a wall, which will really slow down this very special series.

Overall, episode 6 was a really nice change of pace and a solid setup for a hopefully much more dynamic episode 7. If episode 5 was decidedly serious, then episode 6 isplayfully serious, served with a heaping dollop of shaved ice and pleasantry. It might not be a particularly strong episode in terms of forward momentum, but it is a good episode, hence its rating. Much like real life, it’s a messy blend of highs and lows, landing, in the end, somewhere in the middle with a great deal of hope. And that’s just how I like my yuri anime: a realistic, if messy, mix of happy and sad, but always so, so darn optimistic.