Episode 6 – The Detective Is Already Dead 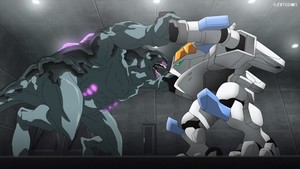 I find myself wistfully wondering about a better version of The Detective Is Already Dead out there in an alternate universe, one where it was backed by the production power and talent to really push the kinds of fun its author is trying to have with the material. I think back to that single stellar cut of animation from the premiere episode, and am more than a little disappointed that we haven’t seen anything of that caliber since, with the anime looking functional at best and positively flat at worst. Going into this series I could immediately tell you the storytelling was going to be consistent nonsense, but that doesn’t have to be a problem if a show can present itself with the right amount of spectacle. One of my favorite anime ever is Symphogear, for instance, which is a show that’s dumb as rocks but sells its over-the-top action with gusto. I guess what I’m trying to say is, despite never having checked out Dead Detective‘s source novels personally, I can see why a version of this story where your imagination was doing all the heavy lifting for the sheer silly spectacle of it all could still be entertaining, and why this middling anime adaptation is coming across as such a disappointment.

All that is me prefacing the point that this week’s Dead-tective is trying to sell itself as centered on the epic battle between Hel’s heart-powered kaiju and Siesta’s questionably-procured mech-suit. That’s something that should be a slam-dunk in the world of anime, but by now we’re well aware that the presentation probably isn’t going to be on the level of something like SSSS.Dynazenon. As such, we see the two titans scroll and slide through hallways, punched up mostly by effective interactions between Siesta and Kimihiko, or idle questions about things like, “Where does Hel keep pulling all those spare swords out of?”. It still struggles under the weight of trying to elevate its own material, particularly in instances where characters will stop the barely-active action to attempt deeper conversations; I don’t know whether Dead Detective is really the place to ruminate on the interchangeability of assigned alignments of good and evil, especially when Hel’s given explanation for her part is “I have a special book that tells me what everyone’s roles are going to be.”

That’s a frustration of Dead Detective storytelling, since the vibes of the story are honestly pretty on point this week. The shuffled-around sequence of events does allow the show to play with our expectations so long as they actually know what they’re doing. The big instance of that in this episode comes in how it, at least briefly, leads us to think we may in fact be seeing how The Detective ended up Already Dead, only for Siesta to dodge her untimely end at the climax of this battle. It’s something we know is coming, so instead of the benign immunity we tend to assign to anime protagonists in stories like this when we see them in perilous situations, every setpiece with Siesta here carries the tension of knowing this could be it. So even when her life is saved via another one of her unexplained detective ex machina tools, the instance of excitement, the strained connections, and conditional goodbyes between her and Kimihiko at least effectively communicate that they mean something. Now imagine that kind of catharsis in a show that could make all the surrounding action look halfway-cool.

That’s probably why the second half of the episode, which follows the aftermath of all the action with a simple peek into Kimihiko and Siesta’s downtime, continues to be the best part of the series. For something that, let’s be honest, is constructed largely to project viewers into this situation where a cool character like Siesta is your wife, the rapport between her and Kimihiko still feels so effortless. It’s been three years since their initial team-up by this part of the story, and the banter between them comes off appropriately lived-in. You get the distinct sense of how much the dialogue here was a strong point the author was originally focusing on, and that effective characterization is a huge part of why they’re able to get the audience invested in the inevitable moment when Siesta finally bites it.

Dead Detective even helpfully provides some clear contrast to highlight how well the Kimihiko/Siesta interactions work in the form of the new character/plot thread introduced this episode. As with a lot of other things in this series, I get the impression that the series thinks everything around its introduction of Alicia is more clever than it actually is. What we get is an instance of Kimihiko basically blundering into the next phase of the story arc, structured around a conversation that tries to highlight the absurdity of it all, but mostly just comes off as droning in how clever it thinks it is simply for noting how tried and tropey this all is. It’s the classic fallacy of writing like this: Acknowledging that you’re aware of how played-out your story elements are still doesn’t excuse you from using played-out story elements.

Beyond that though, you only need to compare the disinterest Kimihiko’s conversation with Alicia invokes to the way the script springs to life again the instant he’s back and chatting with Siesta to see how genuine chemistry written between characters is all that’s needed to keep this series at a baseline entertainment level. I’m able to have a pleasant, amusing time whenever Kimihiko and Siesta are just chatting it up onscreen, but anytime the subject of detective-ing their way through a plot comes up, I feel my body tense up. That’s probably why the prospect of Alicia subbing in for Siesta for the next phase of this arc doesn’t exactly fill me with anticipation. For this episode’s part though, it’s mostly fine. I feel like a lot of the effective spirit of the story being adapted here shone through despite the middling anime elements this week.