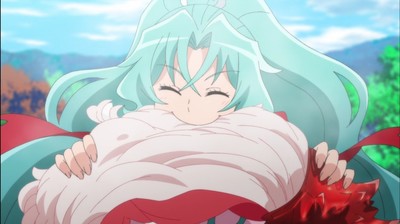 You know, it may be because I am a mere four days away from going back to work as a teacher in the increasingly fraught environment of a “Post”-But-Not-Actually-Post-COVID public education system, but you know what I really didn’t need Tsukimichi to spend fully half of this week’s episode on? Incredibly boring standardized tests. That cliffhanger from last week may have given you the impression that something interesting or important was going to happen regarding the frosty Patrick Rembrandt, but nope, that was just a pointless misdirect. The whole “You’re doing everything wrong” remark was based purely on Rembrandt misunderstanding Makoto to be a rank amateur, and when our hero reveals all of the valuable monster bits that he procured last week, it’s nothing but apologies and exposition dumps from the guy. Basically, Rembrandt’s family has fallen ill on account some kind of witch-doctor curse, and now Makoto has to find the ingredients to make the ambrosia that will cure them.

Except, that part of the story barely factors into the plot of “The Melancholy of Handsome Middle-Aged Men” at all. In spite of that ludicrous title, the episode is actually about Makoto registering for the Merchant’s Guild, which means we get to spend ten exhaustingly dull minutes as Makoto learns about the two different tests he’ll have to take, buys the study guide, and aces the test. There’s hardly anything funny or entertaining about the proceedings; it’s literally just watching him go through more exposition dumps so he can take a timed, standardized test about merchant stuff. I will grant Tsukimichi this: it is admittedly kind of interesting for Makoto’s success to come not from his overpowered main-character status, but simply from having a basic education. It makes sense that most people in this medieval fantasy world would not have much in the way of formal training in math, science, the humanities, and so on, and I like that Makoto’s supposed genius comes from his circumstances as a kid from another world.

That amounts to little more than an interesting factoid, though, and it certainly isn’t enough to hang an episode’s whole story on. More than anything, this episode reminds us that most of this show’s charm comes from the stereotypical comedy banter between Makoto, Mio, and Tomoe. Makoto is occasionally allowed to be enough of the butt of the joke to play solo, but most of the time he’s the straight man, and it just isn’t fun to have him unironically interact with a bunch of other random side-characters. I’m not going to pretend that I was bent over with uncontrollable laughter when Tomoe and Mio finally reentered the story, but at least Tsukimichi was finally giving me something to work with! I mean, Tomoe murders and boils a giant crab with her Errant Samurai skills. That’s kind of fun, right?

Also, Tomoe and Mio get into an extended fight over Makoto’s memories, which began when Emma was being a little schemer and tricked Tomoe into coming to help Mio with memory translation duty. Of course, it inevitably ends with Mio also turning into a giant nerd for Makoto’s Earth media, which naturally leads to Makoto having to come and lecture his deeply strange monster girlfriends about the importance of sharing and punctual communication. The parent/child dynamic that Makoto sometimes has with his companions is something I’m not always crazy about, but these shenanigans at least fell into the “pleasantly goofy” category of filler, instead of being interminably boring.

The past couple of episodes haven’t been especially strong for Tsukimichi, and I hope the show can dial up the quality before too long. I would especially love it if the show would stop trying to end its episodes with silly cliffhangers, since all they’ve done is highlight how much better Tsukimichi is when it doesn’t worry about telling a compelling story with serious world-building. It already has a weeby dragon lady and a murderous spider-woman who has discovered her love for anime and Kamen Rider. Can’t that be good enough?