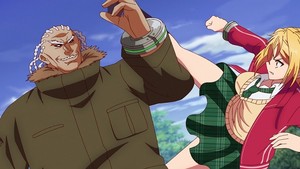 Oh no, I really jinxed it now. I thought calling out Battle Game in 5 Seconds‘ descent down into its regular roughness last week would be enough for it, but the show in turn called my bluff by seeming to degrade even further with this week’s episode. Welcome to Battle-Game Breakdown-Watch 2021! This week, the Green Team discovers that the only thing that can defeat those CGI monstrosities is a shambling computer-generated puppet of their own, so Yuuri spends the first half of this episode shifting to a clunky, obviously-3D model any time the action requires even slightly complex movement from her. The ghouls introduced last week were distracting, but this is downright disorienting. CGI animation can and often does look good in anime, even in a mixed-media state, but this is not an example of that. It instead comes off like a desperate shortcut, and I can’t help but fear for how it bodes for the back half of this show’s production.

Roughly-rendered schoolgirls aside, the renewed boss fight with the ghoul ends up only serving a couple of purposes here: To put Akira in a situation where he has to make more creative use of his power and potentially out himself to a few others observing him, and to kill enough time until Mion pops in and announces that this more intricate mission-based setup we’ve been working with for the past several weeks is going to be streamlined into a life-or-death direct battle anyway. The ridiculous ease with which the Red Team talks her into that condition could be seen as an example of their effective might-makes-right approach to things, but mostly it comes off like the author of Battle Game was already bored with taking us through this more technical setup and just wanted to cut back to characters trying to kill each other.

But of course that doesn’t mean we actually get straight into the big team battle. The show needs to time-out for another preparatory phase. A lot of it, especially towards the end of the episode, is concerned with introducing new characters and reintroducing old ones. It is nice to see Kumagiri and Ringo again, and there are some story steps they move forward with their respective returns. But the new characters brought in amount to little more than flashing new designs at us for a few seconds before moving on, like the show is trying to rush through their introductions just so they don’t feel dropped in out-of-nowhere when they show up for a couple of super-power showcase fights in another episode or two. There’s not really anything yet to impact their dynamics with the established characters; Rin was already the least interesting member of her own team in the previous arc, so I’m not terribly engaged by her spending precious few seconds sniping with the catty Renka. Though I guess Skateboard Grandpa™ looks kinda fun; I’ll look forward to seeing what he does.

No, it is the returning characters that really got anything in Battle Game moving forward, specifically Ringo. For a minute there I was concerned that the writing was still ignoring the point that her power should let her see Akira’s true ability, but fortunately that stalling only lasts a moment before they properly cash that check. It adds one more interesting wrinkle to the ongoing saga of Akira’s power and how he uses everyone around him pressing on him regarding it to try to mine more functionality. I can particularly appreciate the way Ringo notes her understanding of Akira’s mindset regarding the need to keep his ability secret in the first place in order to be able to properly use it. But it would be nice if Ringo’s appeal towards Akira was rooted in a more cleverly-written contrivance than her knowing him from his hardcore online-gaming days (wherein he was apparently so notable he had magazine articles written about him?!), to say nothing of the tiresome framing of her desire to partner with him implicitly pitting her against Yuuri in a rather forced love triangle situation.

In some of these interactions, Battle Game gestures at the possibility of the abilities and the way the players use them being able to bring people together, rather than being fodder for machiavellian power-plays. Ringo’s comparison of her secrecy situation with Akira’s shows just one way these kinds of circumstances can promote empathy between people. It’s defined even more broadly by Shirasagi when he claims that the Green Team’s commitment to communal caring for one another is ‘the natural human order’ which needs to be restored, which rings as a rather nice implication compared to the cynical dog-eat-dog style you might expect people to otherwise tune into this content for (and which Mion seems keen on promoting). I’m not sure quite how that intersects with Shirasagi’s personal ability to messily murder anyone his peaceful negotiations break down with, but it’s something, and shows that Battle Game can at least try when it isn’t waving janky fights or thus-far-inconsequential new character designs in our faces.

Does that conceptual bright spot excuse the sub-par presentation and messy pacing choices of this week’s Battle Game? It’s barely been enough in past episodes, so I can’t say it makes things go down even easier now. The thing is, so much of the content that is covered in this episode feels like bits that could have simply been expanded on in moments of previous episodes or cobbled together into explorations to be seen in parts of the plot to come later, preferably when other stuff was actually happening in the story. Instead, one fight that was pretty much already done gets further resolved in a style that looks like it’s threatening to take the whole show down with it, and then we cut to people sitting around talking about the next fight we probably could have gotten to already if the story had figured out its priorities ahead of time.