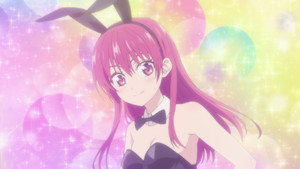 Episode seven of Girlfriend, Girlfriend felt a bit more disjointed compared to the other ones, and I feel like this boiled down to the fact that the two sections that make up this episode didn’t feed into each other as naturally as those that came before it. The first two-thirds of this episode seemed to follow up on a lot of those insecurities that Nagisa and Saki were experiencing before. However, it honestly feels like this was a skit that was supposed to be in another episode as the setup didn’t seem particularly informed by the events that both follow and precede it. The skit deals with a lot of the confusion regarding what exactly the characters want amongst the promises they made to each other. Specifically, we are reminded that all of these characters are very much horny teenagers who feel stuck because they want their relationship built on fairness towards each other, which is actually a really noble thing. I was a little confused about what exactly Saki wanted at first and I like that Naoya pointed out how her trying to seduce him was giving mixed signals about whether or not she wanted him to actually go back on his promise to them. That’s an attention to detail I kinda wasn’t expecting, but it’s clear that the girls just want to feel appreciated and desired even if nothing physical actually happens yet, because there’s a world of difference between having desires and feeling personally prepared enough to follow through with them.

The comedy felt very cute and genuine, though the ending punchline did come off as a bit lazy. Not only was the joke itself probably the weakest in the episode, but it also felt like a big missed opportunity for the girls to maybe talk about those desires openly with each other. I don’t even think it would be that far-fetched either considering that we’ve seen how comfortable they are talking about things in previous episodes. Who knows, maybe it would’ve also been a good opportunity for Saki to realize that maybe all these passive comments she keeps making give a strong indication that she’s probably not straight? But I digress.

The final third of this episode actually does properly follow up on the events of the previous one regarding Rika’s obvious feelings for Naoya. His obliviousness was expected but mitigated once again by the extreme lengths he goes to make things right. Even though everything Rika says regarding her feelings were already heavily implied by the events of the previous episode, it’s nice to see her actually put those things into words. It’s not that I never bought into why she would fall for him in the first place; I was just expecting the show to throw a few more curveballs before getting to this point. This episode ends with Saki getting full confirmation on Rika’s feelings and the look of sheer terror on her face really does make me look forward to what’s going to happen next. Overall not a bad episode, but probably not the strongest in terms of comedy and narrative payoff. It felt more like a side episode with a little bit of setup at the very end, so I hope what comes next is a little more fruitful for my tastes.