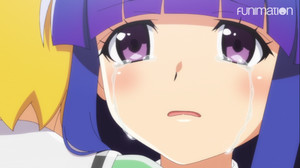 I had a lot of trepidation heading into this arc. Satoko is the primary orchestrator of the events in her quest to hurt Rika, which means that this iteration of saving her from familial abuse could only be an exercise in futility. It’s an ugly mess and I’m suspicious whether Satoko’s characterization in it can survive.

Prior to GOU and SOTSU, Satoko was an ostracized and abused little girl. The village turned its collective back on her because her stepfather had sided with the government over the proposed dam project that would have caused Hinamizawa to disappear. Some time before her mother and stepfather disappeared, she is said to have filed a false report claiming abuse against him. Later her brother Satoshi disappeared, too and she was left in the care of her stepfather’s brother, Teppei, a drunk who truly did physically hurt her. In the original Higurashi arc, Keiichi struggles to band the village together to support Satoko despite the associations with her family and push back against Tokyo bureaucracy in order to provide her with a safe living environment. It’s evident in the Question Arc and subsequent Answer Arc that Satoko is truly suffering from PTSD.

Satoko’s unresolved past plays a strong part in why she’s carrying on this way in SOTSU. She’s prone to unhealthy levels of codependency, as we saw in the past with Keiichi in the previous series and as we’re seeing now in GOU and SOTSU with Rika. After the big reveal that Satoko is planning out the events in each timeline in order to squeeze the most pain out of Rika and coerce her into not leaving Hinamizawa, I knew that this particular arc was going to be divisive. GOU and SOTSU was already laying the groundwork for a rehabilitated Teppei so while I’m not shocked that the reveal is Satoko is faking it all for pity, I am disappointed.

It’s very obvious that Satoko doesn’t like Teppei, even this nicer version of him. In that sense, it’s not that his arc undoes the trauma she experienced, but it twists the character in such a deliberate way that it is hard to drum up any sympathy for her. Which I guess is darkly amusing given that her entire ruse this episode is for that specific purpose. The best possible reading I could have is that she still wants to punish Teppei for his past even when this specific version of him isn’t guilty of the same abuses. The entire town is about to get drawn into a furious fight to protect Satoko over presumed abuse that, if I’m remembering correctly, Satoko never directly lies about. She’s cagey about what’s actually happening to her in the same way that many victims of abuse may be because sometimes reporting makes it worse. It’s just that in this situation she’ll be using the assumptions of her friends and neighbors to her advantage.

I sort of jumped ahead here as well, because the episode opens with a few additional details. First, while we know that Satoko always had to die after Rika, this time we find out that if Satoko dies first, she’ll be placed in a timeline where Rika was never born. Judging by Satoko’s reaction to that information, Eua didn’t offer that tidbit until after Satoko decided to start looping. Second, it does seem like Eua’s primary motivation for this whole endeavor is entertainment. I also noticed that at least at one point she starts focusing on Keiichi in a way that felt like foreshadowing to…something.

Lastly, and perhaps the most harrowing part of this episode, we see Satoko engage in some expert gaslighting in order to push Rika into giving up her desire to attend St. Lucia. She manages to work Oyashiro-sama’s Curse into the discussion and makes sure to let Rika know that her status as a priestess makes her desire to abandon the “hick town” of Hinamizawa especially reprehensible. However, it was the first time we’ve seen something approaching a conversation between the two about their futures. If Satoko wasn’t so focused on manipulating Rika, they might have actually reached something like an understanding.

I feel for Satoko, on the surface at least. I’ve long thought since GOU that the answer to the Rika-Satoko conflict is both accepting that they cannot be BFFs forever because they want different, valid things out of life. It’s Satoko’s own codependency and Rika’s naivety that got them into this unhappy situation. Rika was, honestly, self-centered in her push to get Satoko instead of facing their differences and possibly “breaking up” the friendship. The torture Satoko suffered at the school itself was also inexcusable. Yet, even with all of that laid out, I don’t see how Satoko’s character can honestly be redeemed. Call it hypocritical, but Higurashi is series where I expect big, emotionally-motivated violence. There’s just something about this particular betrayal of trust that hits different.


Higurashi: When They Cry – SOTSU is currently streaming on
Funimation.