Home » Episode 7 – How a Realist Hero Rebuilt the Kingdom
Anime

Episode 7 – How a Realist Hero Rebuilt the Kingdom 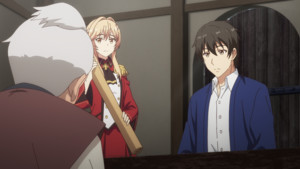 I have to say, on the net I really enjoyed this episode. I wouldn’t go so far as to say it was a smash hit, but overall I think it had a lot more going for it than it had working against it.

The first half is largely a generic dungeon run adventure. There’s a lengthy discussion about magic and how different elements get you enlisted into different branches, and while it isn’t exactly tedious I wouldn’t call it exciting or ground-breaking. The dungeon portion itself is really not much you have not seen here done elsewhere, with adventurers going underground and fighting a giant monster briefly before running. I think Master Mascot is just a delightful little character, so I appreciated his moments to shine. Mostly though I think what I enjoyed was that this felt like “generic” fantasy to me, which is comfort food as far as I’m concerned. I will watch generic dungeon adventurers ply ancient crypts for magic swords pretty much ad infinitum, so sue me.

There were also a few nice touches in terms of the realism angle in this go around. I like that Souma rewarded the scribes who had helped him make strides in the budget with time off (even if the wine in the cellar had “thanks for all you do here’s a pizza party” management vibes). For the new city: while obviously logistics and urban planning are not uniquely modern concepts, I do think that it makes sense how these things are presented in the episode. The founding of a new city being informed by questions of “How do we best manage the flow of goods from point A to B?” and “How will we evacuate people in the event of a natural disaster?” are the sorts of questions that make practical sense. And perhaps most importantly, they don’t feel outside the realm of possibility for a modern person like Souma to think about, nor do they feel like painfully obvious questions that a vaguely-late-medieval-to-early-Renaissance-Europe-ish would have overlooked. To my mind, this actually does make a bit more sense for Souma to bring up and for it to be (at least somewhat) revelatory for the people living here.

The main issue in terms of enjoyment is the animation. It’s not egregious or anything, but it is stilted at best throughout most of the runtime. I think the best bits were actually reserved for the discussion near the end of the episode and that was a nice touch at least. Sadly, I struggled a bit with Souma’s logic regarding the tsunami. While I understand the real world thinking of “This clearly false story has a kernel of truth/wisdom, let’s analyze that,” I think maybe he needs to read the room and realize that he is in a fantasy land with a literal demon-spewing portal to the north. I’m not saying the legend couldn’t still be a cautionary allegory about tsunamis, I’m just saying he needs to consider that sea monsters are a genuine possibility here? That’s all.

Honestly hope the show maintains roughly this vibe for the rest of the season, cause I think then we’ll be in good shape (by which I mean I will enjoy myself more).

The Quintessential Quintuplets Are Not Equal: Hulu Japan Reveals Which Girl Talks with Futaro the Most - Interest