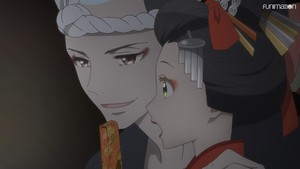 Episode 7, “The Hanamichi and the Silver Bridge,” heralds summer vacation, and also, an intensely Ai and Sarasa-centic episode that feels like a nice break between episode 6’s fairly serious growth arc and whatever episode 8 will bring. And while this initially breaks episode 6’s building tension… I found myself kind of excited. There’s something magical about getting a summer vacation episode in the last gasps of summer; it’s like the stars aligned in a strange, but kind of fantastic, way. Safe to say I was (and am, as I write this review) pretty stoked for this episode.

Post-OP, one thing is immediately clear: Sarasa’s mind is elsewhere while Ai’s trying to learn how to be a best friend. It’s a neat little moment that tugs on that episode 6 tension of Sarasa being told – incredibly bluntly – that she’s not cut out to shine at the top of Kouka. It’s nice to see the girls have their roles flipped, with Ai being the noticeably more energetic and playful counterpart to Sarasa’s rather pensive state of mind.

It’s clear that Sarasa is genuinely hurt. She so desperately wants to be a top star, but mimicking others isn’t a skill that plays well with kouka. Now, for kabuki, it’s essential, and the episode flat out tells us that a few minutes in. Given her experience with being steeped in kabuki as a kid, it makes a lot of sense why Sarasa mimics instead of acts with her own personality and skills. The only question is: will Sarasa grow from this experience to be a better actor, or will she ultimately flop? I’d say the former because she’s a main character, but I also think that the series will put her through a growth arc instead of resorting to the instant gratification of giving her top stardom right away.

However, that’s only a snippet of this episode: what’s more interesting is Ai, who’s really starting to come out of her shell. While I called this an Ai and Sarasa-centric episode, it really is a character study in how Ai’s trying to learn how to be close to someone who’s not her uncle. It’s hard, and understandably so: friendship means vulnerability, and Ai’s never had a safe place to be vulnerable. Her home life wasn’t safe, school wasn’t safe, her mother wasn’t safe, and her mother’s boyfriend certainly wasn’t safe. Sarasa is really the second safe place Ai’s had: third if you could her uncle and JPX, but even the latter developed into a situation that was unsafe. Thus, Sarasa is kind of a safe harbor in a sea of dangers, and Ai’s determined to moor there and that means learning how to be a good friend. Of course, we viewers know that, in many ways, Ai already is, even though she makes plenty of mistakes because of her innate desire to maintain distance between herself and others. Ai just needs to realize that she’s already doing all the right things: friendship simply takes time.

I do want to flip back to Sarasa, because we get a lot of insight into her childhood, which makes it easy to see why Sarasa is the way she is: she’s always been exactly who she is now, down to her cheerful pigtails. She grew up steeped in Kabuki, and is something of a natural actress. She’s at her best when she leans on her innate talent, but it also is something that she still needs to have polished. Yet that talent has also brought her a lot of trouble, and while Sarasa might be sweet and gregarious, she’s not dumb. It’s clear that even as a child, Sarasa understood what it meant to have an adult yelling at her because of her skills and gender. In fact, I’d hedge a bet that that’s an underpinning behind her decision to seek out kouka: it’s easy to give a flippant reason, or even espouse that you’ll be at the top, but it’s hard to admit that you’re doing it because the kind of performance you wanted to give is denied to you because of your gender.

While not necessarily driving the plot forward, episode 7’s character study serves as a good bridge to Sarasa finding her own way of acting and performing as a kouka trainee. It’s also a bridge to Ai becoming more comfortable with her friendship with Sarasa, and maybe realizing that she’s doing the right things right now, which is ultimately what matters in the end.

I think that’s why this episode stood out to me so much this week. Yes, it breaks the tension (to some degree) of episode 6, but in the end, it’s a really good episode that deep dives into Sarasa and Ai in incredibly satisfying, if not somewhat tearful, ways. Like a good, 100k+ word fanfic, it gives us intimate details about why Sarasa is who she is and does what she does without ever saying she’s immature or too brash for her nature: instead, Kageki Shojo!! demonstrates, once again, that it understands the girls who make up the cast, and is willing to treat them with care apart from all the drama. The same could be said for Ai, and it’s just really, really nice. And that’s what episode 7 is, really: a very nice episode promising a stellar episode 8 when vacation (assumably) ends next week.

5 Anime You Must See According to Mamoru Hosoda - Interest