Home » Episode 7 – My Next Life as a Villainess: All Routes Lead to Doom! X
Anime

Episode 7 – My Next Life as a Villainess: All Routes Lead to Doom! X 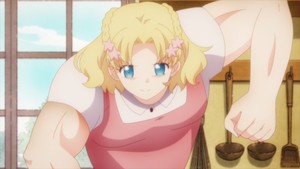 Napoleon once said that “there are sleepers whose awakening is terrifying.” Had he seen this episode of My Next Life as a Villainess: All Routes Lead to Doom! X, he might have amended that to “there are sleepers whose dreams are terrifying,” because wow, I did not see some of the dreams we become privy to this week coming. Of course, neither did poor Anne, and I’m not sure she’ll ever recover from a few of the things she’s seen.

How did Anne get a peek into the dreams of Catarina and most of her harem? It’s pretty simple: while on a visit to the Ministry of Magic, Larna leaves Catarina and Co. alone in a room with a magic dollhouse and doesn’t tell Catarina not to touch it. When she inevitably opens the dollhouse door, Catarina and all of her friends and would-be lovers are sucked into a magical device that allows you to live in the life of your dreams. When Larna, Sora, and Raphael return to the room (quickly followed by Anne, whose Idiot Alarm was clearly going off), they find an empty room with light coming from the dollhouse windows. Upon peering inside like locals when all the summer people have gone home, they find that they can see into the dreamlife of each missing person, trapped within a room of the magic dollhouse.

It’s a neat concept, even without the zaniness of this story. I’ve always loved dollhouses – the more intricate, the better, possibly because I read The Borrowers way too often as a child. I would still have my childhood dollhouse, in fact, if it hadn’t gotten lost when my parents moved; not only was it fun to set up scenes, it also served as a great way to sort Halloween candy! But it’s the idea of life in miniature, the potential to play with a real-life setting without the constraints of reality, that’s the real appeal of elaborate dollhouses – it’s a way to take control in a world where you don’t always have that luxury. That’s what’s behind the concept of this magic dollhouse: it’s a chance for everyone to play out alternative lives where they aren’t bound by social rules. Since our cast’s lives are very constrained by their social stations (even if they don’t always act like it), this really is a once-in-a-lifetime chance for them.

A few of their dreams are absolutely as expected: Mary imagines herself as a man of higher rank than Geordo so that she can steal Catarina away. It’s sad that she thinks she has to be a man, rather than being able to imagine a romance with Catarina as a woman, but I think that says more about the story’s world than Mary’s gender identity. (She makes a pretty damn attractive man, too – even in someone else’s dream.) Geordo, meanwhile, dreams of sailing the seas with Catarina, free of all royal responsibility (and, not coincidentally, of the other aspirants for her heart) and able to just go where he pleases. His Catarina’s a little more damsel-like than she is in reality, which perhaps suggests that he doesn’t know her quite as well as some of the others. Sophia has her down pat in her dream about being a fairy best friend to Catarina, and so do Nicol and Alan – it’s Nicol and Alan themselves who aren’t quite what we’d expect!

But even bird Alan and kitty Nicol aren’t as out of left field as Keith and Maria’s fantasies. Keith’s gone full gender-swap, which I don’t feel gets enough explanation, and Maria…well…apparently Maria dreams of being super buff so that she can knead dough better? I don’t know about that one – it’s definitely funny, but it also feels like a bit of a wasted opportunity. (Or setup for a Toriko crossover, which I’d be fine with.) It’s really Anne’s reactions that make those last two, though; when she and Raphael enter the dollhouse to try and save everyone, she stumbles into Maria and Keith’s rooms and very clearly regrets what she’s learned.

But probably the best things about this episode, apart from the laughs, are the facts that Raphael, who is so often sidelined, gets to do a bit more and that Catarina manages to save herself and everyone else in the end. She’s the only person who can snap herself out of her dream (eating, reading, and playing games; no shock there), and ultimately she’s the one who deactivates the doll keeping them all in the house. Catarina is at her best when she’s just following her instincts (or her stomach).

That isn’t to discount any of the other good moments, like Sora reappearing to Catarina’s delight and everyone else’s ire or the cathartic glee of Raphael getting to drag Larna off to do paperwork, but really what this episode does is remind us all that Catarina is the beating heart of her own story – and that’s what makes her so irresistible to everyone who meets her.

The Night Beyond the Tricorner Window GN 8 - Review