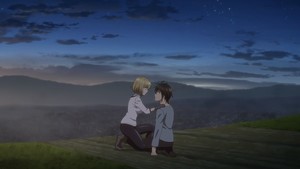 Alright, there’s some of that sweet, sweet context I’d been craving from Peach Boy Riverside! Picking up right after the second episode, I mean the third episode, that is, the one where Hawthorn’s town got blown up, this week’s episode finally continues the formative story of Sally coming together with her companions and formally kicking off their travels together. Presented the way the show has been, we had an understanding of the ultimate results of these occurrences, but getting to see the Hows and Whys of the whole thing is refreshing after a month-and-a-half of gimmick-mandated nebulosity. For all my frustrations in following them, I do think characters like Frau and Carrot are kinda cool and want to properly engage with them. So late as it is, I’ll take this kind of backtracked build-up.

As we’d kind of guessed at, this part of the plot has a lot of informative hints dropped about later parts of the story. We get implications of the earlier moves Sumeragi was already making behind the scenes, and some confirmation of how integral Sally’s role could be in all that. So we end up with a little more understanding of why the creepy priest was trying to tempt her to his side in that crossroads episode (which, if I’m reading things right, is still the latest on the chronological timeline we’ve seen so far). Similarly, Sally gets to bump into Mikoto for seemingly the first time since starting her journey, narratively placing them not together, but on the parallel paths we’d catch up with them on in that same later episode. Lacking that kind of contextualization was a frustration of those entries we watched earlier, so at least finally getting it by this point does land in a somewhat satisfying way.

On its own, there are a lot of little bits to appreciate about this episode. After the dust settles on the town’s destruction and Sally is saved from mean-lookin’ Oni Somenki by a timely psychic phone call from Sumeragi, the crew stumbles to the next town over to enjoy some reflective downtime. Hawthorn, who’s been begging for more characterization in all the episodes we’ve jumped around to so far, is finally allowed some insight. He’s obviously going to be hurting in the face of his home (and presumably everyone he knows) being vaporized right in front of him, something Sally acknowledges right away. I don’t know that it’s fair to him that he feels he has to then put on a brave face for Sally’s sake, but it reads as some sort of character choice. Really, the moment he does let his mask slip and confirms how failing to protect all those he felt duty-bound towards is one of the most human-feeling parts we’ve gotten out of the otherwise out-there offerings of this show. It’s to the point that it retroactively frustrates me a bit to know that Hawthorn still doesn’t get much focus in the episodes we’ve seen from later down the line. At least he gets thrown a bone at the episode’s end in the form of Berett, an adorable little guard formerly under his command who actually managed to survive the attack.

Other reflections by the characters aren’t as fresh, even if they’re still nice to see. Yes, we could definitely have figured out by now that Meki’s new name of ‘Carrot’ came from Frau somehow, but the more full explanation of just what losing their name and status means for an Oni lends the act a little more weight. I guess I’m mostly surprised at how incidental the renaming feels otherwise, as Carrot and Frau haven’t forged as much of a kindred connection as I might have predicted from their relatings in later episodes. That’s another caveat of this shuffled structure, instilling in the audience expectations for how things played out that might not actually come to pass. Then again, there are still a few more episodes between this one and the later ones we’ve already seen.

Where the heart of this episode comes from, where the story resolves to move forward to where we, uh, already know where it goes, comes from Sally’s own musings. I appreciate her initial consideration of backtracking on her own journey to take Hawthorn, Carrot, and Frau back to her kingdom. We of course know this doesn’t come to pass, but it’s honestly nice that she even thought of it, that’s not the sort of thing I expect at all from plots like this. But apart from that, issues with PBR‘s objectives crop up again, naturally, in the form of discussions on its in-setting racism. Putting aside my misgivings on whether an edgy action cartoon about multiple Momotaros fighting Oni is really the place for a nuanced analysis of systemic prejudice, most of the musings floated by the characters here come off as half-baked. Hawthorn and Mikoto both mostly lay blame for humans’ distaste for demihumans at the feet of “Just the way it is” social upbringing.

There is an explanation a moment earlier from Mikoto where he seems to be justifying genocide in the name of grievance against an individual (it being nebulous as to how much of his own experience he’s speaking from), which is a patently absurd notion from a show that’s always managed to at least affect a baseline “Racism is bad” stance. Though they pointedly portray Mikoto as an unhinged weirdo during this speech, so there is that. But the ultimate resolution Sally reaches from pondering all this is to continue her journey while trying to find a ‘compromise’ between species who are prejudiced against each other. It’s pretty limp as far as social ambitions go, especially since we’ve seen from later down the line how little that’s manifested in her interactions with other people anyway. If that thematic lynchpin at the crossroads of this chunk of the story comes off as a big ol’ shrug, at least I know I haven’t been missing out on much as the show has moved forward. Conceptually, we already knew that Peach Boy Riverside had relatively little to chew on, but there are some expansions on characterization I’m interested in seeing more of moving forward.