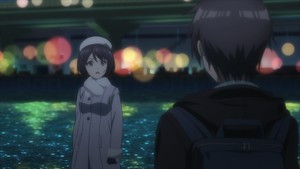 Episode 7, “Tackling Awkward Situations,” picks up after episode 6, cleverly skipping over last week’s completely unnecessary clip show to try and get us back on track with the back half of Remake Our Life!‘s ever-evolving story. It’s also a decidedly more sitcom episode, focusing on Tsurayuki and his… very enthusiastic fiancé Sayuri.

What’s interesting about episode 7 is how it’s starting to spend less time on character-centric episodes and more time with Team Kitayama as a group. This is both a good and bad decision, primarily because Nanako here got like, two episodes to herself, and Tsurayuki only got one and a half. Poor Aki basically only had scenes up until now, though she gets some less than stellar ones this week, which just feel kind of flat and unsatisfying.

And I suppose that’s what stayed with me during my watch of episode 7. The way Remake Our Life! handles tension can sometimes be frustrating: it builds tension and introduces problems, but tends to resolve them too quickly. This results in plot elements – and even entire plotlines – falling by the wayside. Take, for example, the plotline involving Tsurayuki’s fiancé, which seemed to lead the episode, but kind of get forgotten by the middle in favor of scenes of Nanako and Aki flirting with Kyoya. While it’s always fun to watch Nanako, Aki, and Kyoya interact, it’s also mildly irritating to see them slipping and sliding back down into Plotless Girl territory: less so for Nanako, who received dedicated episodes, but definitely for Aki, who is still little more than a high-pitched, blue-haired coed by this point.

Remake Our Life! is also starting to lean more and more on Aki and her innocence for sexual gags, which isn’t bad so much as it’s just filler for a series that had really good momentum. Aki’s a cute character, and from a pragmatic point of view, I get why she’s pigeon-holed into a lot of very specific tropes: with her higher pitch voice, shorter stature, and figure, it’s easy to see why she probably was like this in the source material. But I’ll be honest: I don’t like it. It weakens her as a character, and makes her feel like fanservice fluff rather than a genuine character. It’s that problem I mentioned before of the girls being incredibly underdeveloped: Aki’s still stuck as a one-note character for one-note gags. Actually, there’s a particular scene where she and Kyoya go through an h-scene in a CG that leads to her sketching his beepis… or so it seems. It’s actually his thighs, you pervert: did you think she was gonna actually sketch his privacy square? It’s that kind of humor, and it weakens what I was expecting to be a solid, emotionally satisfying followup to Tsurayuki’s issues with overwork.

But personally, the worst part of this episode for me is that it’s really trying to get me onto the Kyoya x Nanako and the Kyoya x Aki ships, but I’m a devout fan of Kyoya x Eiko, and plan on sticking with that to the end. Will it come to fruition? Honestly, I don’t know. One of the thrills of watching Remake Our Life! week to week is just going along with the flow of things seeing how Kyoya’s second chance is going. I have to admit that I’m not super thrilled this week, but I’m ever optimistic.

Back when I first started reviewing this show, I was really looking forward to something Shirobako-esque: a story that gets into the nitty-gritty of game development, and really plunge into what it means to work within that specific industry. Since the characters are in college, that happens… to a degree. It’s the same but different, with markedly different execution. That said, Remake Our Life! remains solid, going from a mediocre, muddled premiere to a show that I’ve quickly glommed onto. This is my favorite thing with reviewing, and I certainly think my enthusiasm for this series shines through.

Episode 7 was… average, though it did ultimately set up a few things for Tsurayuki to get some resolution to his personal plot arc in episode 8. In fact, we might even get (read: most likely will get) to spend some more time with Sayuri in the future, which is nice because Sayuri initially comes off as vapid, but by the end of ep. 7, it’s clear she definitely, decidedly isn’t. Definitely looking forward to our last few weeks with Team Kitayama. Now that they’ve made their doujin game, I’m excited to see the plot veer more into, and maybe circle back to the magical realism aspect of Kyoya’s return to the past. Whatever happens, I’m pretty sure I’ll like it, even if there are a few things I’m not a fan of.

Moving Furniture is a Cinch in the Future, According to This Anime Short - Interest