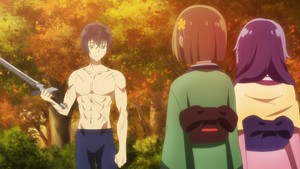 I will give Seirei Gensouki this much – it didn’t choose to start the Yagumo arc the exact same way that it started the other two! In fact, the only person who gets the snot kicked out of him this time is someone who richly deserves it; there’s no “misunderstanding” what Gon was trying to do to Ruri, and even if she wasn’t Rio’s cousin, he did the absolute right thing by taking that piece of human garbage out. It may not always work in its favor in terms of cohesive storytelling, but this series does not pull its punches when it comes to despicable bad guys.

There are actually a couple of other places where I really like the approach Seirei Gensouki has taken to some of the hoarier tropes of anime. First and foremost, when Ruri forgets that Rio is living with their mutual granny Yuba now, she doesn’t try to blame or punch Rio for her own mistake of walking out partially undressed. While we don’t necessarily see that as often as we used to back in Ye Olde Dayes of Love Hina, it does still rear its head now and then, and having the episode take the mature way out of the situation when it’s been leaning into other familiar rom-com aspects is very nice. Ruri also doesn’t appear to necessarily have the hots for Rio, making only her friend Sayo romantically interested in him – a good break from the harem aspects of the previous story arc. And finally, Shin’s jealousy of Rio is handled better than we might have expected, taking on a fairly natural tone as opposed to the viciousness of the guys back when this was temporarily a magic school story. Shin simply sees a newcomer wandering in from the forest being better at everything than he is, which is a normal reason to feel envy in a small, insular village. The fact that Shin reveals that he and Sayo are living on their own sans parents also indicates that he needs to feel like he can take care of his own sister, making Rio even more threatening to him – a threat that he’s willing to overlook or take advantage of when Gon comes to town.

That aside, this is one of the less-inspired episodes. Possibly that’s because it’s trying very hard to get us once again to the point where the story needs to be in order to proceed; there’s only so much world-building that an adaptation can cut out, even if it isn’t always the most interesting aspect of the story. Part of the problem is likely due to the fact that it simply doesn’t look very good – go back and rewatch the scene of shirtless Rio and watch his torso shrink and expand while his pecs grow and sharpen over the course of its two minutes. Certainly some of this could be because the animators were more invested in showing us Ruri’s nearly-bare breasts, but still. It’s an issue throughout the episode (Rio’s parents’ cairns are another example), and it just drags things down.

Presumably, however, this is all serving the purpose of getting Rio to learn more about his parents. Yuba’s refusal to tell him about why they had to leave is interesting, and when we add in the title of next week’s episode, Rio may have some more impressive bloodlines than Yuba being his paternal grandmother may suggest. The fact that he’s being sent to the capital and that a royal tax collector (probably the only noncorrupt one in all fantasy) also indicate that there’s more going on here. For Rio, however, the primary issue is that he’s feeling himself becoming more Haruto every day, and that’s not something he’s entirely comfortable with. It makes his motivations unclear even to himself, and that can’t be a good place to be, even if you apparently mastered spirit arts even more than last week’s episode implied. (The way he built that bathhouse was very reminiscent of By the Grace of the Gods.) That may explain the sort of dead look on his face as he was pounding Gon’s face with his fists; he’s at this point stuck halfway between being two different people. That could be an interesting element to follow up on, so we’ll have to hope that the series continues to build on it in the weeks to come.