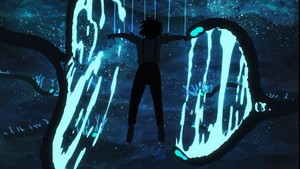 I have to give Sonny Boy credit for becoming so much more than “Lord of the Flies but weirder.” Right now, I feel the best description of it is a (relatively) cohesive animated smorgasbord of philosophical thought experiments presented via deadpan psychedelia. This seventh episode balloons the scale into an incomprehensibly large multiverse—not just a collection of empty alien worlds, but an infinite cascade of societies teeming with small dramas, the rule of law, and myriad absurdities. While I’m going to focus the most on Sonny Boy‘s notion of the absurd in my analysis this time (specifically in relationship to ideas proposed by Albert Camus), that’s only because it’s easier to think about the show with some kind of external footing. There are plenty of other perfectly valid approaches, and that’s what makes it such a fun show to have a conversation about and with.

In his essay The Myth of Sisyphus, Camus argues that absurdity arises from the conflict between our human desire for complete understanding and the universe’s incomprehensibility. In other words, absurdity isn’t an intrinsic quality of the universe; it’s simply an inevitable consequence of our limited human perception. This notion of perception is particularly important in Sonny Boy, as Nagara is the observer from whom this entire ridiculous situation extends infinitely and simultaneously into the past and future. Without a human observer, there is no absurdity. Camus performs his analysis in the context of what causes a person to commit suicide, but since the students here have some degree of immortality, they instead direct their ire and anguish outwards at Nagara. This is far from the only place where Sonny Boy diverges from Camus’ perspective, yet I still find him an appropriate reference point for this episode in particular.

To Camus, the world at large shrugs off reason thanks to both its complexity and the absence of a unifying concept or presence, i.e. God. This is the struggle Nagara’s classmates have to deal with now that they’ve grasped both the enormity of their situation and their abandonment by the principal. Sonny Boy presents several different kinds of reactions. Rajdhani, the resident scientist, suffers from the realization of his scientific method’s limitations. Camus uses the model of the atom as an example, specifically calling out our constantly evolving and ever-more-granular understanding of its mechanisms as proof that a “true” understanding will be forever out of our grasp. In a way, Rajdhani understood their situation better than anybody else on the island, and it didn’t help squat when the chips were down. No wonder he feels despair.

Hoshi, however, seems lighter than ever in light of his abandonment. Camus criticizes other philosophers for taking an undeserved leap of faith and inserting God into the absurd gaps that arise when confronting our understanding of the universe. Hoshi might have previously been guilty of this, but now that he no longer hears the voice of God, he’s helpful. He’s a leader. He’s somebody who might have forged a genuine bond with Nozomi and the others under different circumstances. He has embraced the meaninglessness of their situation, and he’s been liberated by it. In this respect, Hoshi is close to what Camus would call an absurd hero, but I think there’s a better example in the episode.

Nagara’s new friend Futatsuboshi probably best exemplifies the attitude that Camus lauds in The Myth of Sisyphus. The eternal Sisyphean nature of their construction project is actually what made me think of Camus in the first place. Even though the episode namechecks the Tower of Babel (and visually builds on the paintings by Bruegel the Elder), Sisyphus—and specifically, Camus’ interpretation of the myth—feels like the more apt point of reference to me. Camus famously concludes his essay with the command “one must imagine Sisyphus happy,” framing his tragic eternal punishment instead as his own triumph. In the moments when he turns around and watches his boulder roll back down the hill, Sisyphus is afforded the clarity of thought that lets him grasp the enormous futility of his situation. Yet still he walks back to do it all over again. His deliberate and unflinching embrace of the absurd is his revolt, and that’s what makes him a hero.

Of course, Sisyphus’ lot can be interpreted as analogous to our own individual lives, toiling day in and day out for no greater reason than to toil. Similarly, this is the lot of Futatsuboshi and the others, carrying stones down to build up their unfathomably large tower towards heaven. It’s self-evidently ridiculous to Nagara, and he initially perceives the student laborers as mere worker ants mindlessly following orders. As he spends more time working with them, though, Nagara witnesses all the little and large ways the people in this thought-experiment-made-manifest have adapted to their drifting. Futatsuboshi in particular reveals to him that his (and everyone’s) apparent acquiescence comes paired with a clear understanding of the absurdity and hopelessness of their construction project. Yet, like Sisyphus, they keep following the boulder back down the hill anyway. This is not the best life one can imagine for them, but I think it certainly qualifies as the most life they can live, which Camus would be pleased with.

Now, Futatsuboshi also says that he’s happy to have hope, which Camus might rankle at. In the essay, Camus dismisses hope in the same way he dismisses God—as a weak leap of faith that shields one’s eyes from absurdity when they should be confronting it with unclouded vision. Camus’ revolt is one ideally infused with spite and scorn. However, given Sonny Boy‘s journey so far, I think this is an acceptable place to divert from Camus’ point of view, and it’s not even necessarily that much of a divergence. Futatsuboshi’s embrace of hope goes hand-in-hand with his acceptance of the hopelessness of their drifting and abandonment, and he even acknowledges that his hope is likely false. In this way, I think hope can also be an act of defiance. Consistent, perhaps, with Camus’ perspective, Futatsuboshi is actually “punished” for succumbing to the hope of finding a shooting star. And yet, he lives and toils on, and this act furthermore completes Nagara’s growth in this episode. Nagara doesn’t find a solution to anything, but he learns something nevertheless. He sees the boulder rolling back down the hill, and he makes the conscious choice to follow it all the way to the bottom. He keeps going.

Koumori’s intent was never to judge or punish Nagara; he just wanted to show his one-time acquaintance and current cosmic observer what life for a normal drifter is like—much like an involuntarily-imposed version of how gods of yore would disguise themselves to live among humans. It’s difficult to say what the Beatniks’ goals are, but I don’t think they’re anything as simple as an end to their drifting. In the realm of literary history, the attitudes of the Beat Generation don’t have a whole lot of overlap with Camus’ absurdism. However, there is some synchronicity between the two when we consider how they’re paired together in this episode. The Beatniks’ postwar counterculture embrace of hedonistic activities (drugs, sex, and the like) can be interpreted as a manifestation of the revolt, freedom, and passion that Camus described as the appropriate behavior of an absurd hero. In Sonny Boy, then, perhaps the Beatniks just want to sustain these worlds as long as possible, again prioritizing the most life they can have. These worlds are prisons, and they are also sanctuaries. Nagara doesn’t want to destroy the walls keeping them in; instead, he doesn’t want their drifting to be “a mistake.” That answer is good enough for Koumori, and he declares that Nagara, having confronted and accepted—but not succumbed to—the absurd, is free.

Before I conclude, I have to couch the preceding essay in the acknowledgment that I am not at all an expert on Camus. While I’ve had a generalized familiarity with his ideas (enough so that the subject of this essay came to me as soon as I finished the episode), I only just read The Myth of Sisyphus in full yesterday for the first time, and this is also the sole complete Camus work I’ve digested to date. Thus, I’m sure there are ideas and nuances that I’ve missed or misinterpreted during the turnaround of this review. However, I’ve had a really fun and instructive time writing it, and I hope it helps some of you frame this episode more clearly. Sonny Boy is so dense and ambitious that I know I needed some base frame of reference to make heads or tails of it. And even if I’m off the mark with the observations I’ve made here, the anime is obviously fascinated with the fundamental absurdity of living, so a conversation with Camus seems both inevitable and constructive. I’m also eager to see how the show deals with Nozomi’s listlessness next. Will Nagara help her embrace the ethos of the absurd hero, or will the show posit yet another solution for our scattered cast of castaways? Whatever happens, one must imagine that Sonny Boy will continue to defy expectations in deliciously unpredictable ways.

Episode 8 - The aquatope on white sand