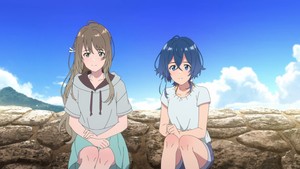 Episode 7, “Ice Cream Toast,” keeps the good times rolling as Kukuru and Fuuka come up with another plan to help prevent Gama Gama’s looming shutdown. However, this time, it’s in the form of Kukuru actually taking a break, which is definitely not what she wants because how does that benefit Gama Gama? (well, it does, but indirectly by not burning out the Director, but I digress) Still, it’s summer, and even aquatope deserves a dedicated summer vacation episode, which is exactly what this is.

I think I mentioned it in my review of either Super Cub, Kageki Shojo!!, or maybe in Remake Our Life!, but I actually quite like summer vacation episodes, which are often nice little standalone-ish episodes filled with light-hearted fun. They’re kind of a trope, sure, but aquatope‘s is a good one, thanks to some really stunning BGM that has these lilting, playful strings paired with a distinctly tropical vibe and steel drums. It makes for good filler noise as Fuuka, Kukuru, and their friends splish-splash about the ocean.

At first, when I started this episode, I expected my biggest gripe to be the inclusion of the elementary schooler siblings of our teenage cast members, in large part because every kid with siblings (so… not me) gets stuck watching their kid sibling from time to time, especially during summer vacation. They also get stuck watching the siblings of other kids, and their kid sibling’s friends. But as it turns out, that’s not really what bothered me this episode; kids are cute, and in episode 7 of aquatope, they’re pretty much the same kind of cute kids you expect in anime.

No, what actually bothered me was the “Fuuka-chan’s kind of like your older sister, huh?” line.

I have to tell y’all: I’m sort of dreading the potential for “gal pals” happening here. It’s something I’ve avoided really thinking about since the premiere because I’m deadset on this having a queer ending, whether that’s Korrasami (Korra x Asami Sato from Legend of Korra) levels of handholding or like… I don’t know, a kiss because I crave anime validation. But episode 7 finally broached what I didn’t want to say or admit: that there is a strong possibility that Kukuru and Fuuka are being positioned as found family and siblings versus found family and like… wives. Well, girlfriends because they’re teens, but you get my point. Thankfully, there are some good sapphic moments between Kukuru and Fuuka that gave me life anew, and reignited my belief that this will be gay… or at least, as close to gay as it’ll be allowed to be.

You might be thinking, “Well Mercedez, their relationship doesn’t have to be romantic. Not everything needs to be sapphic, sis.” And you’re right, not everything needs to be romantic: in fiction where romance is often the default, there’s a lot to be said for queer, platonic relationships. And honestly, a lot of teenage female friendships are intensely sapphic, even if the members identify as absolutely het for life. And as someone who’s both asexual and aromantic, it’s important to me that stories where romance isn’t the prize get told. It’s even more important to me that the value of friendship is recognized: I firmly believe that friendship and platonic love can be just as powerful as romantic love, if not more so.

As a devout yurijin, I can’t help but sigh (sapphicly, of course, because I must be extra) at the notion of seeing Fuuka and Kukuru get a “sisters for life” ending. Of course, this is preempting an entire cour and a half of material: I’m still sticking to my Twitter prediction that this cour will end in September (in show and I guess, IRL until like… Autumn 2021) and then pick up years later in the second cour when Kukuru and Fuuka and are older, wiser, and gayer than ever. But… that’s just a theory: an anime theory, and one that I’m definitely sticking to even with. This episode is trying to muddle up my happy little queer-shaped heart, but I’m tenacious: I’m still sticking to reading this show as being about found family and queer youth. One episode hinting at a disappointing trope isn’t enough to deter me.

In the end, I still really, truly love The aquatope on white sand. I find myself liking these go-nowhere, meandering episodes a bit more each week, especially now that I’ve decided to be patient with this cour. I’m still waiting on tenterhooks for that magical realism to kick in, but for now, I’m alright seeing Fuuka and Kukuru just being together with their community. There’s something wonderful about this slow, laid-back series, and that only grows better ever week, even with weaker episodes like this. It’s all building towards something special, and I’m just so here for that.