Episode 7 – The Case Study of Vanitas 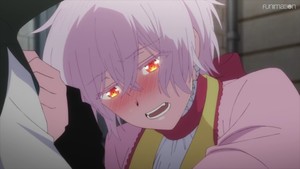 This episode of The Case Study of Vanitas‘ Japanese title may be “Love,” but the French title is “Femme Fatale.” You’ve probably heard the phrase before. It literally translates to “lethal woman” (or “deadly woman,” if you prefer), and over the years it’s become a term meaning a female character who uses her wiles to get what she wants, even (or especially) if that means unfortunate things for the men who fall into her trap. But there’s another term for femme fatale from the early 20th century that bears noting: vamp. Why yes, that is short for “vampire;” it comes from Rudyard Kipling‘s 1897 poem The Vampire, which he wrote in response to Philip Burne-Jones’ painting from the same year, which is also the year that Dracula was published. (You can see them side-by-side here.) Unlike most vampire novels of the 19th century, with the exception of Sheridan LeFanu’s Carmilla (1872), both Kipling’s poem and Burne-Jones’ painting depict a female vampire preying on a human man. Since she’s quite literally a lethal woman, the word “vampire” was shortened to “vamp” to refer to dangerous and deadly (in a sexy way) ladies.

That technically makes Jeanne fit both the vamp and femme fatale designations, although there’s a real argument to be made that none of what she’s done with Vanitas is in any way of her own choosing. I’m inclined to that interpretation – both the kiss and the initial bite were completely under Vanitas’ control, the former taken without Jeanne’s consent and the latter taking explicit advantage of her position, which was a vampire whose mind wasn’t clear because of the screams of the curse-bearers. (In more modern terms, we could say that she was drugged.) Just because she more-or-less bit Vanitas the second time of her own volition doesn’t mean that their relationship has roots in any kind of mutual anything: Vanitas has taken advantage of her for reasons of his own from the start, and the titling of the episode with the dual epithets “love” and “femme fatale” is entirely Vanitas’ own view of things.

In all honesty, that makes Vanitas himself both my least favorite and the least trustworthy part of the series. The latter is almost definitely intentional; apart from revealing what he can do with his book, Vanitas has barely ever given any information in a clear manner. He gives the impression of it at times, but there’s always something just a little off about it, like his answer to Noé’s question about love. If he truly loves Jeanne, there’s something very unsettling about his behavior, because even when he tries to explain it, it sounds much more like he’s interested more in what he can get from her. His actions where she’s concerned feel very calculated: the kiss, to throw her off guard, followed by the blood sucking, to force her to mark him, both in service of making him off-limits to any other vampire who might develop a taste for Vanitas. We know that Noé has considered it, but he’s got self-control; his issue is now that he can’t ever taste Vanitas’ blood because he’s been marked by another. (And yes, there’s probably some romantic jealousy in there.) But quite frankly, no matter how Vanitas might actually feel about Jeanne, she’s a much more likely deterrent to other vampires than Noé would be…plus she might be easier to control, something that Vanitas has already proved he’s willing and able to do.

The other piece of the Jeanne vs. Noé puzzle is Vanitas’ statement that he’d rather love someone who won’t love him back. While psychologists could have a field day with that, the anime-important takeaway is that he knows that Noé is much more likely to do that. Platonic or romantic love, it doesn’t seem to matter; Vanitas’ actions seem to indicate that he’s much more comfortable not having anyone tie him down. Noé is a necessity, the person-shaped equivalent of Murr in the way Vanitas treats him.

Vanitas himself may be the hero the vampires need right now, but from what we’ve seen, I can’t think that he’s the one they necessarily deserve.