Episode 7 – The Detective Is Already Dead 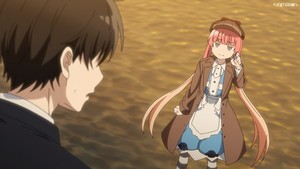 It’s kind of remarkable how much more entertaining Alicia becomes compared to the previous episode once she shifts into taking up the ‘Detective’ mantle. Her out-and-about rapport with Kimihiko is suddenly as enjoyable as Kimihiko’s chemistry with Siesta, simply by virtue of filling the role as an assistant. Alicia’s got an adorable little Milky Holmes outfit on, and Kimihiko happily comments on how quickly and comfortably she’s slipped into the role of a ‘legendary detective’. It’s when the characters are performing these roles, even as they aren’t really ‘solving’ any real ‘mysteries’ that The Detective Is Already Dead finds its footing for solid entertainment value, and it brings me round to the possibility that such a setup may be the intended thematic appeal of the show. I clocked all the way back in the first episode that the concentrated characterization of these people was the show’s main selling point, but perhaps there are some interesting thematic analyses to be found starting with that: Fulfilling the roles of things like a ‘Legendary Detective’, even as you’re mostly playing at it in a fantastical setting, is a fun and satisfying fantasy on its own.

That the story mostly exists in service of providing a chuuni-friendly fantasy of storybook detective action sans the effort of having to actually think too hard about the relative mysteries shouldn’t be too huge a revelation, I suppose. It’s just this episode clarifies that appeal in a way I feel the series has struggled with previously. It helps that so much of the runtime now is dedicated to the antics in a way that feels self-aware without being unpretentious about it. Kimihiko and Alicia’s time out ‘investigating’ is shown as entertaining and fulfilling, even as they accomplish relatively little. What crystalizes the tone most effectively is how Alicia, more than expected self-insert cipher Kimihiko, is the one rewarded by playing at her new role. She remarks partway through the episode how she’s found meaning in her job as substitute detective, even when she is still lacking memories or clues to her perpetually out-of-sorts identity. She is, as Kimihiko puts it, “The girl from Wonderland who doesn’t even know who she is”, and what better Wonderland to occupy in the interim than relatively low-stakes adventures proving herself as a mystery-novel hero?

This explorative demonstration of Dead Detective‘s thematic conceit and processing of Alicia’s character also works to set up what passes for a mystery plot specific to this episode – and it works better because the show obfuscates that said plot even there. My initial reaction to the recurring joke about Kimihiko failing to notice Alicia repeatedly toddling off was more of resigned acceptance, not finding it especially funny so much as it’s ‘there’ as a quirk of what we were watching. Only after the writing revealed that this and other clues were signs of an injured eye was it made apparent that these were in fact clues seeded for the audience. It’s another sign that the series can write effective mysteries when it wants to, parallel to the previous arc’s component about Yui’s own visual cue clues. Indeed, this whole story occurring in flashback denotes that one reason Kimihiko even picked up on Yui’s vision inconsistencies was because of his own prior experience with eye problems. That’s significantly tighter writing overall than I’ve been trained to expect from Dead-tective, so to see it tied to one of its otherwise weaker genre elements as well as what’s emerging as its thematic core is a good sign for its storytelling improvements.

Really, the rapport between Kimihiko and Alicia evening out, propelled by that lazy-eye-diagnosis case, ends up functioning strongly somewhat at the expense of the Kimihiko/Siesta bits, which previously have been the most worthwhile parts of this anime. One issue is how the plot’s resolution leaves Siesta feeling out of sorts with solving the mystery, at first nebulously presenting a situation where she seemingly left Kimihiko with a debilitating injury for several weeks as a way to teach Alicia to be a better detective, before shrugging at an apparent admission that her would-be assistant’s wounded eyeball was the one mystery she actually couldn’t solve. Dang, maybe Siesta really can only come to conclusions on cases if she’s already found all the information beforehand.

Beyond that is what’s presented as the major emotional development of our dynamic deducing duo in this episode, as three years of globetrotting adventures and battling evil organizations finally lead Siesta and Kimihiko to reach their expected, uh, climax. I’m certainly no prude on the subject of light novel characters hooking up, and lord knows I’ve been in favor of Kimihiko and Siesta as a couple despite all my other criticisms of this series since the beginning. But everything about the situation feels like the writing skittishly trying to have its cake and fuck it too. Whether the two had actually been drinking in the evening leading to their loosened-up inhibitions is extremely vague (a ‘Cinderella’ is notable as a traditionally alcohol-free drink), and regardless, their behavior and opening up to each other in their impromptu in-bed chat feels genuine enough. But then they wake up feigning hangovers, with Siesta apparently so dissatisfied with the decisions made that we detour into a mean-spirited joke about her attempting to drug Kimihiko to erase his memories of whatever actually happened. I know the sporting barbs and the respectful antagonism between these two is a large source of the appeal of watching their relationship, but this felt like too much of a swing into apathetic cruelty at the expense of what could have been an earnest, sweet development between them. Especially as we sit here still considering that we might be seeing Siesta’s last days with this storyline. Consummating some long-standing romantic tension isn’t famous for not being a death flag, after all.

But if all the other parts of the episode working well enough that the previous best part of the show was only upended by that and its own surprising shots at ambition, then I don’t have a ton to genuinely complain about with Dead-tective this week. The more modest ambitions of the presentation, mostly limited to the characters hanging around chatting with each other, even plays well off the show’s famously limited resources. Between that and its themes coming into sharper relief, this felt like the series effectively being the best at what it had always tried to be. It’s still certainly not perfect, inhibited by some of those messy choices and being only a brief aside in a broader plot that’s had tons of issues with, y’know, making sense. But for the moment, I had a genuinely engaging good time with it pretty much all the way through.

Episode 3 - The Great Jahy Will Not Be Defeated!