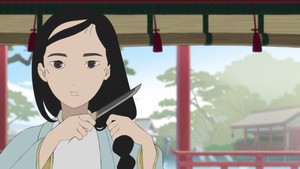 One of my favorite folktales that my grandmother told me was about the city of Khelm. There are many Jewish folktales about the “wise” people of that place, and one tells of when the bathhouse caught fire on the night of the new moon. The people of Khelm were concerned that they wouldn’t be able to see to fight the fire, so the wisest men in town decided that they should simply burn the buildings near the bathhouse—then they would have plenty of light to see.

While Jewish folklore is generally not close to medieval Japanese epics, this episode of The Heike Story called that particular tale to mind because its message of a particular kind of foolishness is very similar to what happens when Kiyomori sends one of his sons to Nara to confront the warrior monks: needing light, they set a building on fire. And before the night is through, two major temples have been burned to the ground.

It’s an important moment in several ways. Certainly it shows that action without thought is rarely a good idea, and that bad deeds eventually catch up to those who perform them. Kiyomori may not have lit that first building on fire, but he’s been metaphorically burning rivals to ash for a long, long time, and without the tempering influence of Shigemori, there’s no one to stop the blaze. His glee at the fact that two significant houses of worship, containing Buddha statues, scrolls, and other important religious items and icons, have been destroyed is either a marker of his hubris or a sign that he’s no longer thinking clearly. He can’t see that the actions of his family have risked angering the gods; he can only revel in the triumph he feels was executed. Since that means taking delight in the deaths of many monks and the destruction of divine artifacts, that’s a very ill-advised joy indeed. It also appears to be the final straw for Kiyomori—soon thereafter, he takes ill, burning with a fever so hot that water evaporates when it touches his skin. Even if his wife didn’t have a dream about Kiyomori’s impending transportation to a very specific hell we could tell that his burning flesh is his punishment for the burning of Nara. He’s just burning from the inside out, the fire fueled by his greed, lust for power, and many, many cruelties committed in their name.

But even before Kiyomori’s death, we can see that the end is coming for him. While his son-in-law, Retired Emperor Takakura, is still on his deathbed, he summons Tokuko and tries to command (or convince—almost everything he says sounds like an order) her to marry Cloistered Emperor Go-Shirakawa, her father-in-law. He claims that it’s for the benefit of Emperor Antoku, still a toddler, who will need powerful backers, but it really looks much more like he’s just trying to solidify the Heikes’ grip on their own waning power. After all, if Tokuko is the wife of two emperors and mother to a third, doesn’t that look good for the Heike family in general and Kiyomori in particular? But Tokuko has finally had enough of being pushed around by her father, and for the first time in her life stands up to him. Kiyomori’s shock is palpable; it’s clear that of all of his children, he expected his biddable daughter to be the last to defy him. That she can is an indication for us not only of Tokuko finding her own strength, but also of Kiyomori’s waning hold on the Heike.

As it turns out, she is the last person to defy him; soon thereafter he dies. Kiyomori’s death is, in some ways, the end of the Heike as a force, as symbolized by Shigemori’s son Sukemori throwing Biwa out of the family house. Why he does it isn’t entirely clear, but he’s consistently been the child the most like Kiyomori, and this seemingly random act of cruelty is an easy way to crystalize that. It also positions Biwa to become the wandering biwa player who will one day compose a popular version of the story she has witnessed, especially since the remaining Heike stand to be scattered without Kiyomori’s guidance.

We are only roughly halfway through the entire story. These episodes covered the back half of book five and the first half of book six, and not as smoothly as I might have liked; time moves at a dizzying pace. But the death of Kiyomori really does mark a major point in the story. (Plus, now we only have keep track of one evil old bald guy!) Shigemori’s spirit is still clearly watching over Biwa, perhaps more than he’s keeping an eye on his actual children, and he seems well aware of what’s to come. How that all plays out, and how far the anime version will take us, remains to be seen. Hopefully Tokuko’s refusal to follow her father’s orders any longer will spare her from some of the pain that’s surely to come.

The Heike Story is currently streaming on
Funimation.