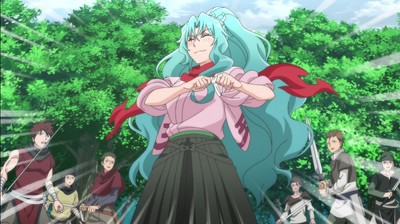 I’ll always have a soft spot for an episode like “Wondrous Medicine Production”, which wants so badly to be a badass showcase of awesome action. The first half features Makoto using his wits and magical skills to square off against Rembrandt’s transformed wife and daughters, and then he gets to cut loose with an ass whooping when the band of assassins that got teased last week show up to throw down. If Tsukimichi were a show that had the technical chops and sense of grandeur to push a story like this to its limits, we might have had a real stunner on our hands. The episode isn’t that, of course, not at all – but by golly does it try its little heart out.

I’ll be honest: At first, I was ready to write this off as another major disappointment from Tsukimichi, the same as last week, specifically because of the Rembrandt plot. Put simply, it’s boring as hell, because the show’s extremely limited production values sap Makoto’s adventure of any thrills or tension it might have had, and there’s just nothing to the story. Makoto gets the ambrosia he needs, and then he proceeds to methodically cure all three of Rembrandt’s family members of the curses that turned them into generic-looking zombie things (Think those stupid Not Vampires from that Will Smith adaptation of I Am Legend). He encounters virtually no difficulties, and the ordeal is finished in a snap. It just isn’t a very fun or interesting plot, no matter how you slice it.

What isfun, though, is getting to watch Makoto and Tomoe team up to kick some hitman butt, which is precisely what they do once the Rembrandt stuff is mostly resolved. As I’ve been saying, Tsukimichi is at its best when its main trio get to play around together and cause trouble, so this sequence is a lot of fun. The “comically overpowered hero” shtick is more entertaining to me when you have a whole gang of demigods running amok, instead of just our main dude, and that holds true here. Mio is relegated to the sidelines for most of the fight, on account of Makoto wanting to avoid natural disaster levels of destruction, but her color commentary is funny enough on its own. Tomoe is the Best Girl™️, though, so I was more than happy that she got the chance to take center stage again.

The one major drawback of this segment is simply the fact that the show just doesn’t look very good. Character models often look noticeably sloppy and inconsistent, facial expressions don’t land like they ought to, and the entire affair has an air of cheapness to it. It’s especially odd because that cheapness permeates even the cuts of animation that are clearly attempting to evoke weight, speed, and impact. In that sense, Tsukimichi trying so hard almost makes things worse. The bit where Makoto face-slams the teleporting mage, for instance, is clearly supposed to be a kickass action beat that lets our hero cut loose and show off, but it still ends up looking janky, which only makes you feel bad for the show. An anime has to know its limits, and I think Tsukimichi‘s reach is exceeding its grasp when it comes to the action scenes.

Then again, there’s a certain amount of charm to Tsukimichi‘s earnestness, kind of like with Tomoe herself. Her wannabe-samurai routine is consistently endearing because it feels like she really means it, like when she goes out of her way to recruit Lime Latte as her new vassal, allowing him to escape his life of crime and do whatever nice guy stuff he’s trying to do for his orphanage, or whatever. It’s dorky as hell, but it’s sweet in its own way, and did I mention that the guy’s name is Lime Latte? I don’t give a single solitary damn about whatever sketchy rich-person shenanigans that Rembrandt is up to, but I’ll gladly watch the further adventures of Lime Freakin’ Latte and his newfound family of egregiously weird monster dweebs. More cute jokes and wacky characters, Tsukimichi, and less of these self-serious attempts at generic fantasy world-building. Please and thank you.

'Can You Just Die, My Darling?' Manga Gets Epilogue Chapter - News