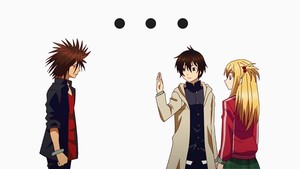 This technically isn’t an uneventful episode of Battle Game in 5 Seconds. There are occurrences, and characters deduce things as well as make connections and resolutions in the name of preparing for the big King-capturing combat competition they’re all heading into. But all that preparation still feels like time-killing in the space before things actually get going, particularly contrasted with the speed with which this series was previously able to cut to its spectacle (which, remember, the series touts as its title and selling point). The past few episodes proved that the story had some inklings for how to up the complexity of its setup for more interesting escalation, but now it’s starting to feel like it’s fallen into too much setup. And it’s compounded by the fact that both the preparation for the fighting and the fighting itself still aren’t all that interesting.

A key appeal of battle-game shows like Battle Game is seeing how the heroes plot out twists and tricks to win even against the myriad advantages of their opponents’ superpowers. To that end, the deck-stacking preparatory period continues for Team Green, which Akira belongs to. We get some more expansion on his power, though I sadly need to reiterate my continued frustrations with that: instead of working through any mind-games regarding manipulating his opponents into believing he has powers advantageous against them, Akira’s current setup is simply utilizing his partnership with Yuuri to have her ‘imagine’ whatever powers he may need at the time. It feels like a broad, copped-out interpretation of the ability as it was originally assigned to him, further skewing a conceptually-neat starting point into a Swiss-Army-Power that can just do whatever the writing needs it to at any given moment. It raises the question of how many other complex dominoes Akira actually needs to set up to win the coming battle if he’s got this advantage on his side, undercut only by the admittedly funny limitation that Yuuri’s simply not smart enough to dream up an unlimited supply of complicated abilities for him.

The other major piece of setup, then, is finally getting a real look at the fabled Team Blue. The established neutrality of them and their leader Otomo means no actual agreement is reached with Akira just yet; It’s mostly a lot of circular attempts at negotiation to imply how powerful Otomo is while also indicating how much Akira actually values Yuuri. The narrative continues to play coy with the question of whether Akira’s attachment to Yuuri is purely one of power-based pragmatism, or if he’s actually come to care for her as a friend and comrade. That, along with Team Blue’s potential contribution to the fight, will hopefully be followed up on as the competition starts up in earnest, as for now this segment – like so many others this episode – feels simply like a narrative box being ticked. At least they take a moment to dunk on Kirisaki, who continues to be the hilariously least-effectual of Akira’s accumulating pile of rivals.

The fact that it took the series until this week to impart some information about Team Blue to us is symptomatic of Battle Game‘s overall difficulties with performing the kind of character juggling act required to make a story like this work. This episode tries to do that “Quiet night before the big battle where we take a moment to reflect with all the characters” beat, but so many of them have barely gotten an appearance or even a line to themselves before this that it fails at feeling meaningful. Like, who’s that nun girl? What does she do? Even the time spent on our ostensible main characters falls flat, as it annoyingly attempts to focus on the implied love triangle between Akira, Yuuri, and Ringo. Its establishment in the previous episode was ill-defined, with Akira himself seems either unaware or uninterested in the girls that way, and so I find myself simply refusing to care about it. More than any of the other dragging points of this episode, this sequence of characters and relationships they’ve utterly failed to instill my interest in rings as the key example of how the story’s misfired priorities make it feel like it’s simply wasting time instead of intently pacing things out.

So then the battle game in Battle Game actually starts, and at least here, an interesting concept crystalizes. As Akira points out, the previous battles were assigned, mandated match-ups, purely existing to demonstrate the wills and resources of the participants. But in this case, the combatants have formed teams and taken sides based on their separate beliefs and ideals. They’re still being ‘forced’ to fight, after a fashion, but the people participating here are at least fighting for the side they’re on in a way that isn’t (seemingly) arbitrary. As well, for the audience’s point of view, this arrangement delineates the characters into clearly-defined power-hungry ‘Bad Guys’ and compassionate ‘Good Guys’, providing us with more distinct reasons to root for the given group of people beyond simply designating them as the viewpoint main characters. It actually makes for a moderately interesting declared diversion compared to the more neutral, ambiguous alignments of other stories of this nature.

That’s about all the arrangement has going for it, though. Once the actual battling starts, we’re left with a fairly droll proceeding thus far. The major fight that kicks off this episode, Asuka versus Oogami, is moderately interesting, as the former’s weight-control gimmick at least provides a couple of clever turnarounds in the combat. But even that is all also undercut by the continued deterioration of Battle Game‘s production. That had struggled and strained just to keep characters looking on-model through scenes of them standing around chatting in the first part of this episode, so when it comes time to animate a big sword fight, forget it. Go ahead and bring back the awkward CGI models – I’ll take ’em if this is what the fighting is going to look like otherwise. Sadly, with the fighting only set to continue through the next episode, I can’t imagine that part will pick up any time soon either. And if Battle Game is now at the point where it can’t interestingly depict its downtime story setups nor its titular high-stakes combat, that means we could be in for a rough ride no matter what it chooses to do for the last stretch of its season here.

Episode 9 - How a Realist Hero Rebuilt the Kingdom