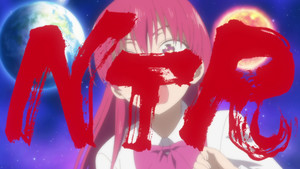 Boy, did I feel nothing but bad for Nagisa throughout this entire episode! Episode eight of Girlfriend, Girlfriend didn’t have the best start; the first third, which basically amounts to a game of keep-away from Rika, definitely felt like the weakest and most drawn-out segment of the episode. The only real redeeming gag was in just how hard Rika seemed to justify being infatuated with Naoya’s more unremarkable traits, which honestly didn’t feel as funny as it could have been. Last week I kind of had a feeling this episode was going to get right to the point of Rika’s feelings and how they would actually fit into the whole dynamic. We’re not quite there yet, but while there were definitely some points that meandered a little bit for the sake of having that resolution happen next episode, I do think a lot of the gags afterwards made up for that.

I couldn’t help but feel like the whole episode favored Saki specifically, which is great if she is your resident best girl for this show. But honestly, I think Girlfriend, Girlfriend is at its best when the girls are treated a bit more evenly, which is why I actually like the second third of the episode, where Saki makes the conscious effort to have Nagisa enjoy some alone time with Naoya to make up for her being sidelined. I was absolutely not expecting that to go down a slippery slope of Saki toying with the idea that she might have some kind of cuckold fetish, but despite it being such an out-of-left-field idea, it’s funny that this also didn’t feel out of character. After all, the show has almost accidentally set up that Saki is probably the kindest and most sexually repressed of the main cast. I think it would’ve been funnier if the segment ended a bit more ambiguously, but still, the whole thing was great with the right amount of build-up.

To be honest, the final section of the episode almost feels like it should’ve been the beginning. I was completely thrown off by the fact that Naoya seemed to have a decent amount of self-awareness to at least consider the possibility that Rika might have a crush on him, and it was very funny to see the girls basically resort to taking advantage of his harem protagonist honesty to trick him. Even when he tries to fire back with rather reasonable observations about Rika’s demeanor around him, they needed to create some kind of excuse that again, does sort of throw Nagisa under the bus for the sake of making the lie work. Circling back to the first sentence that I started this review with, I do feel a bit bad for Nagisa in this episode. She barely had any lines, and even when she did get what she wanted, she still gets kind of caught up in another misunderstanding because of it. I have no doubt that the series will probably have some kind of episode fully dedicated to her before we reach the end. It would honestly be a bit weird if we didn’t. I’m just not really sure how the remainder of these episodes is gonna play out because while I do think this episode was funnier than the last one, it does still feel a bit like we’re dragging out this whole thing with Rika, especially when you consider the fact that, based on the opening, there should be one more girl entering the fray soon. But for now, let’s wait for next week to see exactly how this situation gets resolved before worrying about others.

Shirtless Eren Gets an Official Figure