Episode 8 – Higurashi: When They Cry – SOTSU 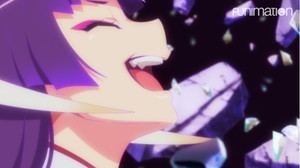 I spent a lot of time in the episode seven write-up explaining why I’m not a fan of this arc’s narrative. I don’t see a reason to retread those complaints again, so just know that this is yet another installment in “Satoko fakes abuse for pity points” sequence. There are, however, a few important parts to look at both in how they move the Higurashi lore forward and what they might mean for Satoko’s psyche.

Satoko is playing both sides here, cooing for her Uncle Teppei whenever she wants to coerce him into having an overly aggressive interaction with her friends and being purposefully obtuse in front of her classmates to feed into their concerns for her wellbeing. Satoko’s own motivations appear to be two-fold. She wants to be the recipient of her friends, and primarily Rika’s, pity as a way of forcing them to care about her. The cruelty she suffered at St. Lucia, along with Rika’s seeming indifference, hurt her deeply. By orchestrating this series of events, she is getting the concern and help that was denied her at St. Lucia.

Her second objective seems to be a power grab. When Teppei was abusing her, Satoko had no control over the situation and was left to rely on her brother and later the village to escape it. It’s evident that Satoko does not genuinely forgive Teppei for the abuse he perpetuated against her, even if he is truly apologetic and doing the best he can to make up for it. All of her interactions with him have an air to them like she’d rather be anywhere but talking to his smelly ass. She has no hesitation about setting him up to take the fall, something she didn’t have the power to do when it really mattered but she can now with her reality-hopping powers.

The third major development comes in at the end during Satoko’s PTSD episode. Surprisingly, there wasn’t a lot of context added to that scene to disprove it as a legitimate psychotic break. After how heart rendering it was in GOU, I was not looking forward to being told it was all an act. Instead, GOU seems to suggest that the episode was in part legitimate but also a cry for help about her current situation. Eua declares that Satoko’s actions have transformed her into a witch, and it may be that this new status and whatever it entails, is actually what’s causing Satoko’s episode in the classroom.

This revelation also seems to firmly cement the Higurashi-Umineko connection folks were looking for. I talked about it back during the reviews of GOU, so to copy-paste here:

In episode 21 of GOU Eua speaks cryptically about having met Satoko before under the names “Vier,” “Mitsuyo,” and “Anomalous Spinal Cord Specimen LD3105” and mentions a “land of the red sea.” The witch Lambdadelta can be written as “34,” which can also be read as “Mitsuyo” and Miyo, the main antagonist from the original Higurashi series.

The Vier and spinal cord bit are both references to Ryukishi07‘s new game, Ciconia no Naku Koro ni and connect back to the numbering mentioned above. The character Vier’s full name is Vier Dreissig, a reference to the German word “vierunddreißig” or 34. Surprise surprise, the character looks exactly like Miyo Takano. Now, I’m not up-to-date on the story in Ciconia so I don’t know what the spinal cord specimens ARE, but the code seems to be “LD” for “Lambdadelta” and “3-10-5” can be read as “Sa-to-ko.”


Higurashi: When They Cry – SOTSU is currently streaming on
Funimation.