Home » Episode 8 – How a Realist Hero Rebuilt the Kingdom
Anime

Episode 8 – How a Realist Hero Rebuilt the Kingdom 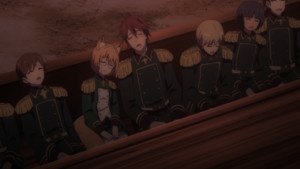 Probably the best episode of the series yet. I was initially worried about the dry exposition regarding technological discrepancies. Not that it was incorrect mind you, only that it was not all that exciting and I feared a large portion of the runtime would be taken up by it. Thankfully it was over quickly and we moved on to a much more engaging episode overall.

I think the general thrust of the episode worked for me. The practical considerations like efficient roads and disaster preparedness are good things to focus on in terms of realistic planning. It is also an area that—in my opinion—occupies a good sweet spot of “plausible topics that a modern person would think of” and “topics that a medieval society might not have fully considered.” The use of the army as a sort of engineer corps for manpower is another practical element I felt was well-addressed, as regardless of the era, a standing army that only fights is very expensive at any scale and given their country’s distance from the front lines it makes sense to use them in those areas.

The latter portions of the episode managed to be more poignant than I anticipated. The musings on humankind’s tenuous relationship with nature, forced to exist in a delicate balance where we cannot exert too much or too little control, were particularly astute. It was good to see Souma rather directly helping people by using his powers to be part of rescue efforts too—I thought the wooden mouse search and rescue was a good touch, particularly Souma being unprepared for seeing grisly deaths. Even the issue I have with Souma being everywhere doing everything at all levels was directly addressed in the show by showing him unable to let anything go, crushing himself beneath the pressure of it all.

Other than a few minor issues, such as the continued middling animation quality or the difficulty of taking a dramatic situation seriously when one character’s name is Robthor, it was a very strong episode.