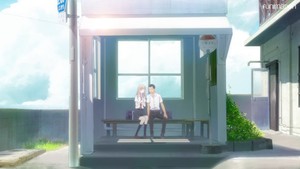 As the Dog Days of Summer give way to the last cries of the cicadas and hopefully a cooler September, “Kaoru’s Summer,” delivered exactly what I wanted: a return to Kouka post-summer vacation, and another glorious character study. That’s honestly a simplification of what exactly episode 8 brings to the table because in truth, this week’s episode is a Kaoru-centric piece that really fleshes out her character, even if that’s… kinda apparent from the title, right? Still, it’s a nice change of pace and excellent use of half an hour, placing Kaoru at the center of a wider discussion about pedigree, legacy, and figuring out why you want something.

This episode does all this on three levels. First, it reveals short-haired Kaoru, which – aside from being THE BEST thing in anime literally ever – ties into her dreams of being an otoko-yaku. Second, it utilizes one of my favorite kinds of storytelling technique, if done well: a flashback cut with scenes from the present. Third, it delivers that wham-bam emotional knockout three times over, which is code for “This made Mercedez cry a lot.”

Like I just mentioned, we first see Kaoru with shorter hair: a cute, Sailor Uranus-esque cut that clearly marks Kaoru’s dedication towards her Kouka ambitions. Yet Kaoru’s new hairdo is hardly the most noticeable thing about her, especially in an episode that’s wholly dedicated to her. Rather, what’s noticeable and notable about her is her pedigree as the direct descendant of a Kouka star. That’s what I’d really like to spend a few paragraphs with today, especially since pedigree and legacy play major roles in Kaoru’s character growth this episode.

One thing that Sarasa and Ai doesn’t have is the burden of legacy: they’re new to Kouka, and while they have the makings of genuine stars, they lack a certain pedigree that quite a few of the girls in their class have. But Kaoru – sweet baby angel that she is – has kouka in her blood: her grandmother was a top musume-yaku in the troupe, and was known as “Spring’s Lovely Snow White,” and one look at her tells you she could have captured everyone’s attention at her prime, though it’s quite apparent that she still captivates, regardless of age.

It’s the weight of this family legacy that rests on Kaoru’s shoulders, setting her apart from Sarasa and Ai as a particularly driven character who’s desperate to excel no matter what. Of course, this leads us to see just how far Kaoru pushed herself, whether that was away from her classmates, away from having fun, or from even just simply enjoying life. Her grandmother’s legacy has become something of a shadow over her, a constant reminder of how far Kaoru is from being even a fraction of the kouka star she is, even though her grandmother herself genuinely worries about Kaoru and doesn’t want her to do kouka if that’s not going to make her happy. I suppose that makes it hurt even more because Kaoru’s grandmother so earnestly wants her to be happy: if Kouka isn’t it, then… Kouka isn’t it.

Honestly, Kageki Shojo!! could have played things differently: Kaoru could just be written as a stoic and standoffish character, but instead, we get twenty-four minutes dedicated to her and why she’s the way she is. Her character development is given the same amount of importance and attention as Ai, Sarasa, and Ayako’s arcs, treating us to some really stunning animation, and of course, a tear jerker which still has me laid out on my bed. It’s because Kageki Shojo!! went all in that we get a really thoughtful character study, reminiscent of a 300k, fifty-chapter fanfic on AO3.

That’s really what I took from episode 8: it’s a lesson in happiness and choosing your own path, in breaking from legacy and doing things your own way if that’s what makes you happy. Kaoru struggles, not because she’s not skilled, but because she’s suffering under a shadow she’s built up in her mind, though it’s quite clear that kouka is still what she wants to do. Kaoru doesn’t want to live like a typical high school girl: she needs kouka, and to a degree, kouka needs someone like her. I think that’s why I cried so much: I really want to see Kaoru succeed and become the most beautiful boy on stage that she possibly can be.

It’s this skillful, nuanced handling of her characterization that I really, really appreciated, portraying Kaoru as an incredibly dedicated, yet genuinely fragile girl. It’s easy to pass her off as being a bit of an ice queen, but this episode makes it clear that that’s a shield: it keeps Kaoru’s eyes pinned on the future, on becoming an otoko-yaku and following directly in her grandmother’s footsteps. Yet it’s quietly crushing her, and it’s ultimately taken away a bit of her youth. It’s only in the last few minutes of the episode that you realize that the kids are gonna be alright, including Kaoru; she’s going to be just as much of a star, not because of her grandmother’s legacy or her kouka pedigree, but because of her dedication to kouka as a craft.

All in all, episode 7 is a fantastic character study that’s got me hella hyped for the next few weeks. Kageki Shojo!! was already good thanks to its source material (and its localization – Katrina Leonoudakis is a J-E localization goddess who should get to translate all the things; I’m biased, and I’m absolutely letting that show.), and this adaptation looks to be even better. Whatever it is, Kageki Shojo!!‘s got it, and you can bet your bottom dollar that this show is going to end on a high note. I really hope it gets a second cour.

Kageki Shojo!! might not be a show for everyone, but for those who like it, it’s easy to love. Sarasa and Ai continue to be a breath of fresh air in the modern anime landscape, and Kaoru is quickly becoming the actual best girl in this show. But who am I kidding? Every character in this show slaps and that’s because time is given to develop characters past one-note personalities and traits into dynamic young women who are going to roil the Kouka world. I truly look forward to where this story is going to: excuse me while I hit replay so I can vibe with episode 8 all over again.

Is the League of Villains ACTUALLY Evil? - The ANN Aftershow