Home » Episode 8 – My Next Life as a Villainess: All Routes Lead to Doom! X
Anime

Episode 8 – My Next Life as a Villainess: All Routes Lead to Doom! X 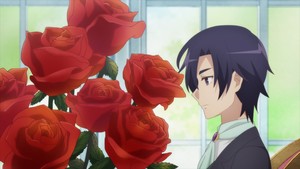 Brace yourselves, everyone: in this episode, the person who does most of the talking is Nicol. I know, I know, it’s a lot to take. But even if he’s not your favorite of Catarina’s swains, he’s the one who may have needed the most character development, so this is a very welcome turn of events. It’s also one of the remaining short stories that I was hoping would be adapted, so that’s a plus as well.

The story takes as its base the idea that has been bothering Nicol since he first fell for Catarina when they were children: the fact that she’s engaged to his childhood friend. For Nicol, Geordo being a prince is much less of an issue than the idea that he’d be stealing her away from someone he’s known and liked for most of his life, and we could say that in some ways he’s not even really factoring Catarina herself into his mental equation; it’s Geordo he’s afraid to hurt. A piece of him does realize that the woman he loves would not be a happy princess (he’s certainly not surprised when Frey, a potential fiancée, points it out), and that she’s not in love with Geordo also doesn’t quite seem to factor in – instead he phrases it as she’s not in love with her fiancé “yet,” which is really quite sweet and says a lot about how much he himself likes Geordo as a person. But the fact remains that he’s so stuck on the idea of Catarina being “taken” that he can’t think beyond it, and it allows him to get bogged down in social considerations.

Because Catarina has been the point of view character for most of the series, it’s easy for us to lose track of the fact that for just about everyone else, what society expects of them is much higher in importance. It’s why Mary had to picture herself as a man to even dream about winning Catarina’s heart and why Nicol is convinced that he can never be the one to marry everyone’s beloved eating machine. Of course, it’s Catarina’s very refusal to adhere to social norms that makes her so attractive to everyone, at least in part, but for Nicol that’s not the major consideration of the episode. Instead he’s decided that since he can never have the woman he loves, he ought to be a good little boy and do his duty by allowing his father to find him a fiancée. He doesn’t seem to realize that his dad is less than enthusiastic and keeps offering him ways out. He’s trapped in his own head, desperately trying to avoid a heartbreak he believes is inevitable and making himself, if not precisely miserable, then certainly not all that happy in the process.

Part of what this episode does so well is the way that it juxtaposes Nicol’s belief that he needs a fiancée with new character Frey’s own certainty that she does not want one. Frey, whose last name is tellingly the same as Susanna’s, aspires to live her own life as a working woman, and she’s emboldened by the idea that a woman is a high-ranking member of the Ministry, as well as the fact that Catarina plans to join it after graduation. She meets with Nicol, but flat-out tells him that a marriage isn’t going to happen, which absolutely blows his mind. Even though he’s known Catarina for years, it seems Nicol never really processed the fact that she’s not interested in following social norms any more than Frey is; as I said, it’s Frey who points out to him that she probably wouldn’t be a very happy royal. To Frey’s mind, Nicol is giving up without ever having tried in the first place, and that’s not something that anyone besides his romance novel-devouring sister has ever said to him. It’s not that he doesn’t trust Sophia, but more that Frey has no interest in Nicol’s life at all, so her words, as a more-or-less stranger, carry more weight because she doesn’t have a horse in this race. And if Frey says that maybe it’s too soon to give up…maybe it is.

With its Monet-esque colors and images, this is also one of the best-looking episodes of the series, and that just feels like icing on the cake. Frey and Ginger show us another side of who the people of Sorcié are, reminding us that there’s more than just the core cast who are trying to live their lives as best they can. Sophia’s bombshell at the end, that their dad stole their mom from her fiancé, is another reminder that life, including Nicol’s, doesn’t have to stick to a plan. Everyone wants Nicol to be happy, and the strength of this episode is not only giving us more insight into him as a character, but also in Nicol realizing that he can keep trying and be happy, too. It may not work out, but at least he’ll be able to say that he tried.

Personally? I’m pushing for a polyamorous harem ending. But I’ll be happy if we get a spin-off about Frey and Ginger, too.

Episode 8 - The Case Study of Vanitas