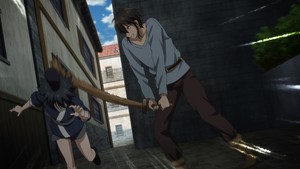 Peach Boy Riverside rounds back to the big pivotal cliffhanger it had previously left us on in the (*checks*) third episode, returning this week to Sally’s choice of whether to join with Mikoto or Sumeragi. And after waiting a month to see the outcome of that choice, the series immediately cops out of every element of it in the most obvious, yet awkward ways possible. No, it doesn’t look like Sally will actually be joining up with Mikoto just yet, and her even trying to go with him has burned the alternative choice with Sumeragi, which is all just as well because some more Oni show up and this episode turns into yet another fight sequence in yet another samey-looking town. Do you ever wonder if the folks airing this show can actually even tell that the episodes are being shown out of order?

That’s my requisite snark about the broadcast order out of the way, as it turns out to be less of a big deal this week than previously. In fact, I’d say that should be less of an issue as continuity and context continue to accumulate through the season’s run. And I’ll admit, it does result in a neat effect in how they originally presented this cliffhanger, then spent time backtracking to provide us that context for Sally’s choice: What her ultimate goal in her journey is and how Mikoto and Sumeragi’s offers function as reflections of her feelings and intentions. Along those same lines, Mikoto gets to bring up his absolutist approach to species-prejudice in discussing Sally’s choice with her, after we got to see that original conversation just last week. It feels like the shuffled narrative shaking itself into something resembling calculated coherence. Could this really be it? Is Peach Boy Riverside actually demonstrating that it can leverage its episode-order gimmick in an interesting way?

I mean, not really, when you think about it, since all those plot points would have been set up for this segment anyway if we’d gotten to watch the episodes in chronological order. That is how storytelling works.

But it feels more effective than it did in the early weeks of the show, so I guess that has to count for something. And being where we are, makes this one that much easier to enjoy as a straightforward episode of an occasionally ultraviolet action cartoon. The most notable differentiation for the tussle in a town this time is how we’ve got a whole group of Oni attacking, splitting off to individually fight a member of Sally’s own crew, as they’d been separated themselves in this story’s preceding episode. It lends the whole thing the decided atmosphere of of a classically-structured shonen action series, cutting between all the different battles as their phases play out. There are different powers on display to clash with what we know our heroes can do (my favorite so far being Mikoto’s opponent, who simply…puts him to sleep), plus some more ideological discussions in the run-ups to several of those clashes.

This does naturally result in some pacing issues. With so many separate threads occurring at once, quick-cutting between them all leaves some feeling like they only progress incrementally. Frau’s battle against Basoo the big bird in particular only seems to encompass a few moments of tussling before the enemy just explodes. Meanwhile, Carrot’s confrontation with Shinki and Sally’s standoff with Sumeragi both take up their time with those aforementioned discussions, which seem mostly to act as downtime filler between any of the other actual fighting we see before their own brawls actually get going. There are some interesting snippets, bringing up that for all the talk of ‘factions’ aligned in the Oni, personal agendas are still the primary motivators at play here. Shinki is seemingly sore at humans for shunning him (presumably on account of his hilariously horrifying huge arms), while Sumeragi is mostly here teasing at complications and revelations pertaining to his Big Bad status- How is he manipulating Oni under the guise of promoting coexistence? Is he actually an Oni or a human? Keep watching, and I’m sure, none of your questions will be answered!

All that’s delay-based set dressing in the background of what’s supposed to be the focal fight this episode: Hawthorn vs Todoroki. Some attempts are made to have this fight mean anything other than Hawthorn finally getting to do something in this show for the first time in two months, but it all comes off as half-hearted preamble rushed into the beginning. Raise your hand if you actually thought Hawthorn’s tournament pal Barsus was actually going to make it one minute past his introduction where he talked about how much he loved his wife and kids and being alive. Frankly, the pass at pathos is practically comical, at least Todoroki’s fixation on Carrot/Meki as he’s presuming she was killed by the Momotaro crew is predicated on a character with a situation we’re already invested in. The problem with that then comes out of the fact that Todoroki only even engages with Hawthorn under the pretense of mistaking him for the ‘Momotaro’ that he thinks killed Meki. It’s a plot point here trying to motivate engagement between the two characters, but because it’s merely a case of mistaken identity there’s no actual integration to heighten the tension and stakes of the fight; Todoroki just comes off like a dumbass and Hawthorn is thrust into this wild situation where he’s about to be killed for effectively no reason and just has to kind of resign himself to it.

As with some of the other clashes on display this episode, the fight itself is fun enough at times. It’s interesting to see how Hawthorn, already coming across like the most clear-headed member of the team, handles a powerful lighting Oni using only a wooden sword and his wits. Hell, the clarification that Todoroki is kind of a dumbass even helps that whole matter feel somewhat plausible. His demonstration of his resolve, even in the face of a massive attack that I was still certain his plot armor was going to bail him out of (which it did) worked as an indicator of why I still like Hawthorn despite the writing’s regular hesitance to do much with him. And in terms of pure presentational mechanics, it all made me just a little engaged to see these fights properly finish in a future episode and- Oh wait, what’s this? I’ve just been handed a notice that next week’s episode will in fact be the one that takes place after the one that would actually follow up on all this. So that’s cool. Cool cool cool.