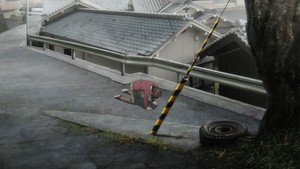 This review is the seventh permutation of a lot of thoughts: thoughts that are hard to parse because of the plot kicking back in in episode 8, “Produce Results,” an episode that’s had me clickety-clacking at my keyboard in an attempt to parse two things: plagiarism and passion. I’m going to try to talk about both, and rather than making plagiarism my sole thesis -like I did before- I’m going to let them mingle because Remake Our Life! is determined to do the same, for better or for worse.

Think back to episode 6, which is really where this Tsurayuki-centric arc begins: think back to his fiance popping in, to his issues with overwork and creating, to it all. Now, in episode 9 -after two actual episodes and a recap episode in the middle- we’re seeing the fruits of Team Kitayama’s labor, and thankfully (for better or for worse) all of those plot threads pay off. Post-OP, viewers are thrust into the team mid-crunch, and in a way, that feels strange: it yanks you into the series but also, into the reality of crunch in Japan’s actual anime industry, as well as the overall Game Industry™. But Remake Our Life! isn’t here to sit with this, at least… not in terms of critiquing an overall industry. Rather, this hooks us into those two points -plagiarism and passion- to demonstrate how not to impassion others.

What ensues is Kyoya basically… manhandling the entirety of the project. This ranges from asking (telling) Nanako to base her music on a pre-existing work to asking (making) Shinoaki use previous CG instead of going for a more expressive style to, ultimately, taking the reigns from Tsurayuki as a writer. It’s all done for the sake of their doujin game which ultimately… kind of pays off, especially when Kyoya hands Tsurayuki a fat envelope of cash. And truth be told,at first glance, I didn’t think much about Kyoya’s reliance on modern ways of tackling work: there’s a lead writer, and they handle things with a group of writers beneath them.

Until those ideas, which the lead writer -or in this case, the director- didn’t create get… taken. Then you wind up with a whole different mess, and a lot of bad vibes all around. In this case, inin his desire to do right and to help Tsurayuki, Kyoya kind of has left him out, taking over almost everything as he tries to direct Team Kitayama towards a successful launch. It leads to a breakdown, and honestly… while I felt bad for Kyoya, it felt like the buildup of months of him trying to steer this second chance just so while forgetting that Team Kitayama is comprised of people: of his friends, which I think Kyoya knows, but… also very humanly forgets because he so desperately wants to do this right and make a mark in this second life of his.

This all comes about because Kyoya has a very specific weakness: his previous life, and the information that his previous professional life lends him. This, for him, is a product of passion, a desire so deep to rewrite -literally remake- his previous life. Yet it’s also Kyoya’s achilles heel, leading him to overwork and overguide the others in Team Kitayama, until… Tsurayuki decides to drop out of school and give up his dream. Why? Because Kyoya keeps stealing his ideas: he keeps plagiarizing and taking the things Tsurayuki wants to create and envision, and makes them the team’s… versus Tsurayuki’s own skilled creation.

It’s not malicious: Kyoya genuinely thinks he’s doing the right thing. Using modern ways of creating (ways that outdate his currently life by a decade and some) are good, right? They’ll save time and structure their game just so, allowing for maximum success. Yet… it’s those same methods that kickstarted the events of Kyoya’s lowest moment in the premiere. It’s what kickstarted Remake Our Life! in the first place. And while it’s clear that Kyoya really, truly cares for Tsurayuki, it’s also becoming intensely clear that Kyoya cares about being a part of the Platinum Year a teensy bit more than his roommates, which has led him to overreach and ultimately and inadvertently, crush the passion, of Tsurayuki. It results in one of the most heartbreaking scenes in the series thus far, which serves as a cautionary tale for friends who want to help too much and ignore the simple fact that everyone creates differently, and that that act of creation is a matter of personal passion.

Passion is critical to creating: that’s just a fact. Even the smallest spark can create a great effect, and when we create, so many of us pour our entire selves into what we make. When you create, you put your heart into the work: doesn’t matter . My heart is in every single review I write, whether it’s a series I like, or a series I don’t like. I work hard to make sure I see things objectively, do my best to present my arguments and ideas and thoughts to you, the reader. I’m not always right, nor am I always the best writer, but… nonetheless, I love the process of creating: I love having passion, and I love using that passion to critique and review.

Perhaps that’s why I found the resolution of episode 8 so utterly soul crushing, but also… so emotional. Remake Our Life! episode 8 is about passion, about creativity, and about what happens when you don’t get to express either one. Kyoya, in his desperation to make Team Kitayama’s game a success, crushed Tsurayuki’s creativity and passion, and as a result… Tsurayuki quits. It’s only when Keiko talks to him that Kyoya realizes all of that, but now, in the timeline… it’s too late. (Or is it? I’m honestly not sure, especially with how things end with the reveal that Kyoya is married to Aki, and has a child named Maki.)

In many ways, the path to episode 8’s But sometimes, you don’t get a third chance: sometimes you mess up so fantastically that that’s it. That’s curtains, and you have to live with the fact that you can never go back. It’s a hard fact -at least, as of the end of this episode- that Kyoya can’t go back: he’s a decade away from that moment with Tsurayuki, and now, all he can do is wonder, “What happened?” It is, in many ways, the burden people who unintentionally hurt others, have to bear: a lifelong fear of finding out how you butterfly effected someone’s life, and a lifetime of simmering shame and anguish. Perhaps, in the end, that’s what Remake Our Life! was trying to explore this episode, time skip included. Like I said: I’m not sure still, and I’m still not sure how to parse big, messy feelings that are almost impossible to untangle. I’m sure, in hindsight, they’ll feel much more clear, but in the aftermath of this episode? Well… I’m still reeling.

There’s a lot more I could say: I haven’t even earnestly dipped my toes into the ending of episode 8. And like I said, I’m still not sure if I actually got what I’m trying to say across. Episode 8 was definitely filled with a heck of a lot of plot, and it also set Kyoya up for his penultimate episode, as well as the finale, in a few weeks. But it also makes me wonder: is this second chance forever? Will Kyoya get to right things? Or will he have to life with his choices in this new life. Alternatively… will he go back to the present, “true” timeline still unsatisfied. I don’t know, and I suppose that sometimes… you don’t get to know. We certainly don’t know (yet) what happened to Tsurayuki: we’re with Kyoya a decade into the future, in a timeline where he’s married. And like I said, we might have to sit with never knowing Tsurayuki’s fate: I’d actually really respect the series if it left that up to viewers to decide. Regardless, episode 8 definitely marks the simple fact that we’re in Remake Our Life!‘s endgame now: it’s full steam ahead until the finale in a few weeks.

Episode 8 threw me for a loop, and even on my seventh rewrite of this review, I’m still not sure what I’m trying to say. What I will say is that I think this episode was powerful, even if it left me feeling muddled, and threw a plot wrench into the mix. I genuinely have no clue how things are going to resolve since I’m an anime-only viewer with no interest in the fan translations, should they exist. There’s something powerful about not knowing anything: I… I kind of like being tugged along for the ride. And in the end, I still really love Remake Our Life!, complicated, messy, mixed feelings and all. I think episode 8 definitely cements this as a series that I’d love to see get more attention, even if I have no clue how Kyoya time skipping eleven years into the future of this secondary timeline means.

My hope is that this series will do well enough to net us the light novels: I’m definitely not ready to leave Kyoya and Team Kitayama behind, mess and all. I’m deeply invested in this series, and really want to see Kyoya’s story through to the end. Here’s to the rest of our time with this series: we’ve got four weeks left to see where it goes, and while I’m almost sure it’s going to break my heart… I think I kind of want it to, just to see this story get the powerful resolution I know its worth.