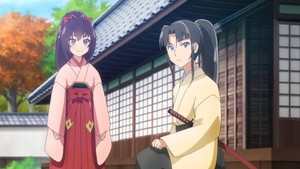 In what is perhaps the least surprising twist of the season, it turns out that Rio is, in fact, a prince. Gosh. Sure didn’t see that coming. The royal blood is on his mother’s side; it turns out that she was not only a princess, but one of the rare princesses whose parents care more about her happiness and well-being than they do about the rank of the man she’s in love with. That was probably the best surprise of the episode – Rio’s dad Zen was his mother Ayame’s bodyguard, and when a neighboring prince fell for and tried to assault Ayame, rather than just saying, “But he’s a prince, honey, and we need the political ties!”, Ayame’s parents instead sent Zen and Ayame off into the sunset, putting greater value on her than on what she, as a princess, represented. It does make Ayame and Zen’s demise more melancholy, because they didn’t get much time to be happy together, but it still says good things about where Rio comes from.

Of course, it now also seems possible that Ayame may not be as dead as Rio’s been assuming. Lucius, the man who is presumed to have killed her, definitely stabbed her, but then Rio passed out without seeing the result. Given that Lucius drugged him and then just dumped him in the slums, he may have been more interested in getting the kid out of the way so that he could run off with Ayame, knowing that murdering her child was unlikely to do him much good. (Assuming there was that much thought put into it.) But it really doesn’t make a whole lot of sense to knock Rio out if he wasn’t trying to run away with his mother, because how much could a five-year-old kid have done to stop a full-grown adventurer? Dumping Rio in the slums, however, allows him to tell a healed Ayame that he’s still alive while not technically lying – and while feeling pretty safe that Rio’s days are numbered, which they certainly would have been without Haruto.

This is all just speculation based on one small scene, but it seems like it could work, if only because Rio’s grandfather warns him about the perils of living his life for revenge, and Ayame being alive is one of the few ways that could be easily subverted. Plus, I read enough mystery novels to know that if you don’t see and touch the body for yourself, there’s a good chance that the person isn’t actually dead in the first place.

The rest of the episode is more or less what we’ve been getting right along: a very plain and basic narration of the events leading up to the next stage in Rio’s journey. That he’s about to set out again soon, possibly even next week, seems inevitable, based on his little speech at his parents’ graves. But he’s also accomplished what he set out to, which is visiting his parents’ homeland. He’s met two sets of grandparents (more or less), found a cousin, enchanted a few girls, and captured some bad guys. That about wraps up what he’s been doing in each story arc thus far, and since it doesn’t look like he has any interest in sticking around to play prince, that means that there’s not much more for him to do. I do hope I’m wrong, because otherwise this is feeling very predictable, and very much like the anime is just checking off plot boxes from the novels in order to get to what it considers the good, or important, stuff from the source material. It certainly wouldn’t be the first light novel (or long-running manga) adaptation to do this, but it always feels like a waste, because in many (if not most) cases, the “good” material isn’t as interesting or thrilling without everything that leads up to it. It’s like wanting to build a solid house and then instead of a proper foundation just slapping down some plywood and mud. Without a good foundation, even the best house will crumble, and Seirei Gensouki sadly feels like that’s the way it’s being built.

Director Takashi Watanabe: At Least One Studio Lockdown Due to COVID Outbreak - Interest