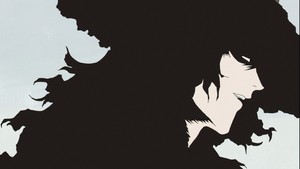 Sonny Boy just delivered one of my favorite episodes of the year, and I could not even begin to explain to you what it’s all about. I’ll try—that’s what I’m here for after all—but this is a piece of animation that I’m going to be holding in my heart and turning around in my head for a long while. In that respect, I think this eighth installment provides the clearest and cleanest distillation of Sonny Boy‘s strengths, and it does so by avoiding clear and clean qualities as much as possible. Horror arrives by way of abstraction. Metaphors butt heads and overlap in a dreamlike swirl of big concepts and intimate connections. Devastatingly beautiful scene composition ties surreal vistas to the interiorities of their inhabitants. This is an episode that is felt first and foremost, with the disproportionate and lingering intensity of a tiny thorn pricking the pad of your finger.

The direction here is the most brilliant it’s been. While Sonny Boy has always walked hand-in-hand with eschatology, never before has the soul-crushing immensity of the apocalypse felt so imminent. Director/storyboarder Keiichirō Saitō trades in the series’ trademark solid blue skies and verdant tropics for a more muted palette of yellows and reds, heralding the sunset on Kodama’s idyllic community. Every scene is staged with purpose, and every close-up is infused the characters’ personality. I love the design of War especially (another thing Saito is responsible for), who looks and acts like he walked straight out of Belladonna of Sadness. In general, this episode feels indebted to experimental theater and animation to a degree beyond Sonny Boy‘s typical penchant for strangeness. I’m not literate enough to bring up a specific example, but at times, it just has the vibe of a short film from the Eastern Bloc, wrestling with war and religion in a striking and nightmarish way. Saito, in addition to everything else, also apparently did the key drawings for about half the cuts in the episode, which is absurd. But it pays off with a tremendous artistic achievement that best hews to the ambitious and free-wheeling spirit of the series.

In the context of the rest of Sonny Boy, this episode uniquely succeeds in the way it ties its layers of allegory to an affecting personal journey. I don’t think Sonny Boy is heartless—far from it—but as a rule it definitely prioritizes its characters as symbols first and people second. While it gets away with that thanks to the strength of its uncanny creative vision, one of the reasons this episode stands out is the deft flair with which it arrests me both intellectually and emotionally. Yamabiko’s long, lonely journey takes him through fields of thorns, roads paved with bones, and boundless red skies. His time with Kodama, on the other hand, is soft and pastoral. Even as the epidemic crescendos to its horrific climax, daylight continues to bless his moments with her. Yamabiko’s arc has a lot of parallels with Nagara’s, but Yamabiko’s feels fuller thanks to the episode’s focus on it. Normally, Sonny Boy flits breathlessly between its wide gamut of ideas; I don’t mind that, but I also believe this episode utilizes the standalone nature of this flashback to its advantage, providing a sense (or at the very least, an illusion) of completeness that escapes its usual scope.

Of course, it’s still impossible if not prohibitive to pin this episode’s thesis down to any one unified concept. That’s not how Sonny Boy rolls. In the broad sense, however, what immediately struck me were this story’s meditations on love. Kodama shoulders many kinds of love—the kind we have for leaders, for saviors, for friends, for God, and for partners—and she bears and reciprocates that weight the best she can. It’s too much for any one person, and she readily admits as much to Yamabiko, but she has a quiet sense of nobility that nevertheless compels her to live up to that love. She’ll heal the bird no matter how many times it breaks its body in a futile attempt to transcend a pane of glass. This inspires Yamabiko, and it spells their mutual doom. Despite his hesitance—learned from a life filled with regret—he learns to love her, but he can’t bring himself to contradict her. He’s her loyal servant. He can’t bring himself to look at her. He’d rather be her dog than speak his mind and risk sewing discord. He kills her.

War is the episode’s most inscrutable character and its lynchpin. It matters not whether he’s a true horseman of the apocalypse or just another drifter. He’s both of those things and more. At times, he acts like a prototypical internet troll, holding vast oceans of contempt and insecurity inside of his heart, letting them collide and mix with the calculable volatility of a chemical reaction. He hurts people because he gets a response from them. He hurts people because he knows he gets a response from them. Kodama lets her love grow so unconditional that she extends it to War, and he does irrevocable damage by the time she realizes her mistake. He’s to blame, but so is Kodama, in her own naïve way. So is Yamabiko. War is a catalyst more so than a villain, preying on and revealing our own individual darknesses, until they fester and grow fetid with blood and bile. War walks daily with us in the comfort of daylight.

Yamabiko and Kodama’s story ends on an unfulfilled promise. Love is not the same as obedience. Love is not niceness. Niceness is the dull blade that War hones into double-edged sword. Niceness is the wall, blank and impenetrable, that Yamabiko builds around his heart. All Kodama wanted was to see what was behind that wall; the first thing she asked of him was his name, and her second request was for his own stories. She just wanted to walk side-by-side with him, not as a god would with a dog, but as a person would with another person. I love the final image she leaves him with: the two of them merrily eating ice cream as they walk down a road paved with human remains. That’s going to stick with me for a while. That, in its own way, is what life is all about.

Per usual, I wish Sonny Boy let its powerful sensory experience speak for itself a bit more. The show can certainly craft powerful images and ideas with its words, as I just described, but it can just as quickly mire itself in circuitous verbal abstractions. To riff on a point I made last week, while I love the way it pulls from classic philosophical thought experiments in its symbolism and scenarios, I do sometimes mind when its characters sound like they’re reciting dense philosophical literature. However, this episode is the best so far at meting out that particular style. And supplementing the striking visual compositions is the soundtrack, which swerves into a gorgeously ambient yet quietly unsettling mode, courtesy of South Korean musician Mid-Air Thief. I haven’t gotten a chance to do so yet, but I’ll definitely be checking out their other work.

Last week, I wrote an essay using Camus as a reference point. My reactions this week are raw and more disorganized, which is an honest reflection of my uncertainty laden in these attempts to “interpret” episode eight. In both cases, though, I’m finishing the review feeling fulfilled in my having watched and having written. I like Sonny Boy for a lot of reasons, but I like it the most for this quality. It’s an anime that conspicuously eschews any attempt to “solve” it, because it has an unspoken yet undeniably full-throated belief that art does not exist to be solved. Sonny Boy is aiming for a place that evokes nonsense and nuance in equal measure. It’s a liquid and lithe thing, tickling the webbing between our fingers as we attempt in vain to pin it down. I can’t tell you what it means. I wouldn’t dare to claim I could. All any of us can do is move forward, whether it takes a single step or 5000 years. I only hope that I can leave a guidepost or two that will help point someone towards their own epiphany.


(I was just about to submit this review when I noticed this illustration that Keiichirō Saitō made to commemorate the episode. I can’t think of a better image to leave on.)