Episode 8 – The Case Study of Vanitas 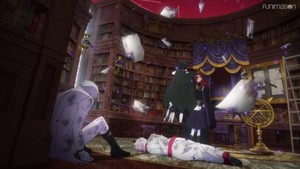 There is nothing scarier than a fanatic. We get two distinct examples of that this week, first when Vanitas knowingly questions whether or not the vampire queen of France is still alive and later when he and Noé infiltrate the Paris Catacombs and run into one of the church’s paladins, leaders of the chasseurs. The former encounter gets Vanitas and Noé kicked back into the human realm. The latter? That could prove far more costly.

Both cases are examples of Vanitas taking at least partially calculated risks, and in his defense, he had no intention of bringing Noé along with him to the catacombs; he did his level best to sneak out of their adorably named hotel (“Chou chou” is an endearment, similar to “sweetie”), it’s just that Noé is naïve, not stupid. He also didn’t realize that there was so much more to the catacombs than the tourist section he, Vanitas, and the dhampir trio toured earlier in the day, and even if they had mentioned it in his hearing, he might have been too busy being aghast at the fact that centuries of dead Parisians had become a major tourist attraction. (Graveyard tourism is still a thing, in fact; if you’re feeling brave, look up the Catacombe dei Cappuccini in Palermo, Italy.) But these catacombs are housing much more than just the dead of Paris, they’re also the headquarters of the church’s Chasseurs (hunters), the vampire-killing arm of organized religion which believes that vampires are an abomination of God’s work. That Roland buys into that wholeheartedly is evident from the first moment we see him, weeping in his devotion to his Lord, and the light of fanaticism still shines brightly from his eyes when he walks in on Noé and Vanitas later in the episode.

So it looks as if The Case Study of Vanitas did indeed know that France had no one with the title of “queen” in the 1880s after all, which quite frankly makes much more sense, given the clear shot we get of the Musée Grévin, a real wax museum in Paris that would have just opened around the time the show is set. The signs in the catacombs are also, to my knowledge, faithful reproductions; mostly they explain how bones were moved to the catacombs when cemeteries were destroyed, typically to make way for more buildings, or sometimes because they were simply too packed with the dead and had become unsanitary. (Catherine Arnold’s book Necropolis: London and its Dead provides a good overview of history’s burial habits.) We also may get a reference to the non-canonical Sherlock Holmes film The Case of the Whitechapel Vampire in the name of a Chasseur the camera lingers on, Norris Watson – in that film, Watson emphatically believes in vampires, while Holmes does not. It’s a great episode for references and history.

And speaking of history and royalty, it’s no real surprise that Luca is the vampiric dauphin, but what’s perhaps more alarming is the fact that Ruthven, and by extension Jeanne, are trying so hard to keep it a secret that the queen is dead, and long dead if that hand we saw is any indication. Luca comments that Ruthven, his uncle, is handling his ducal duties for him, which means that Ruthven is the de facto king of the vampires, since he, Luca, and Jeanne all know the queen to be taking her eternal rest. Right now it doesn’t look as if Ruthven truly believes that Vanitas figured out what’s going on, because he simply booted the good doctor and Noé – and later Murr with his bag of cat food, because he’s not a total monster – out of vampire land. I think we can safely assume that had he genuinely thought that Vanitas knew, he would have just killed him then and there. But even if he is underestimating Vanitas, sooner or later he’s very likely going to realize that he’s much more dangerous than he currently appears, which in part could be what Vanitas was banking on when he began pursuing Jeanne. He is definitely playing a long game of some sort; the question is how much he’s leaving out when he talks about his goals.

That certainly calls Vanitas’ relationship with Noé into even more question. He does seem to need him, and presumably need him alive, because he deliberately tried to sneak out and leave him behind this week. He also warns him about Roland’s flash grenade, although not in so many words, which supports the idea that he doesn’t want Noé to fall into the Chasseurs’ clutches. But is all of this because he likes Noé as a person? Or is he saving him for use on some future occasion? He didn’t sound Ruthven out about the queen for no reason, and if I were Noé, Luca, or Jeanne, I’d start to worry sooner rather than later.

Episode 8 - My Next Life as a Villainess: All Routes Lead to Doom! X