Episode 8 – The Detective Is Already Dead 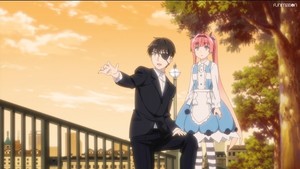 I mentioned last week that The Detective Is Already Dead‘s expanded efforts to elaborate on Alicia had actually worked, and that I could feel myself coming around to being endeared to her. And credit to the series’ storytelling, that turns out to be a calculated effect, an intentional evocation for where this plot was always going. Unfortunately, that same elaboration on Alicia turns this episode’s strength into also its biggest shortcoming: They give away the game for the big reveal relatively early on, hinging everything on turning any attachment we have to Alicia on its head. But since the Dead-tective anime has a middling capacity at best for delivering serious, emotional moments, it results in an episode full of waiting and watch-checking until a revelation that sort of lands.

The general tone this part of the story is going for feels consistent for this episode at least, if a bit detached from the previous one. Siesta had seemed all too happy to groom Alicia as a substitute sleuther, but as of now the tiny twin-tailed girl is presented in more of an antagonistic role: a suspicious wedge in the established Kimihiko/Siesta relationship. It feels like less of a love triangle situation and more an exercise in getting us to more acutely consider the questions that have always surrounded Alicia’s identity. That isn’t to say there aren’t airs of rough romantic times surrounding the setup, Kimihiko’s connection with Alicia culminating as it does on a faux-marriage-proposal that Siesta of course awkwardly walks in on. But I don’t think the series ever intends to make a serious question of whom Kimihiko will ultimately side with.

Instead, it’s all about taking Alicia’s already-suspicious nature and quantifying it in a way where we can start to deduce for ourselves what her deal actually is. Of course, we could already have predicted that things didn’t turn out great with her given that we haven’t seen nor heard from the character in the stories set during Dead-tective‘s present day, but those generalized questions give way to clear unraveling by the time she starts giving off weird vibes to a murder victim’s mother or remarking on how she must have been a ‘bad kid’ prior to her memory loss. Add to that the regular reminders that shapeshifting powers exist in this setting? Okay, I get it, Alicia is probably a transmographied Hel.

The exact moment this revelation is clarified by the characters does come around the same time the audience is supposed to have figured it out, which is a point in favor of Dead-tective‘s base understanding of mystery pacing. But as we know, this has never really been a proper detective show, so the revelation is less about counting down how the clues were pieced together and more about playing off of the presumable emotional attachment to Alicia they instilled in us last week. In that respect, Kimihiko’s last-second desperate denial of the situation works in conveying that feeling, in that I’m sure any real-world fans Alicia had were working through similar struggles. But it’s all undercut just a bit by how the previous episode was the only one where the show really treated Alicia like a character who could interact with and play off of Siesta and Kimihiko. Here, as in her debut episode, she feels more like a walking plot-device, a series of portentous dialogue choices and preloaded Chekov’s Guns to deliver that twist by this episode’s end.

The other issue with the intent of introducing Alicia as a construct, then, is how she ultimately exists as a potential outlet for the redemption of Hel as a character. Don’t get me wrong: Hel seems cool enough, I like her design, and I’m sure there’s some interest there. But at this stage in the story Dead-tective has given us, we don’t have much to go on for Hel’s possible turnaround apart from “Is bad” and “Has a book that tells her the future”. Given her interactions as Alicia these last few episodes we might be able to add “Wants to smooch Kimihiko” to that list, and sure, being waifu-bait for the audience is as good an excuse for a face-turn as any in a series like this. But we haven’t been given any insight into Hel herself to really parse what such a turn would mean. Dead-tective is happy to throw tons of detailed jargon at us earlier in this episode about enemy androids and their crystal heart cores, building up the more sci-fi side of the story and foreshadowing things about Siesta’s own nature. But it neglects to quantify how any of this might apply to the character development at hand, save for an odd aside detail about how one of the hearts Alicia harvested affected her and allowed that connection with that dead girl’s mother, which I think is supposed to be a potentially-redemptive development, apart from, you know, that fact that she killed someone, carved out her heart, and stuck it in her own body.

All that is to say that the moment of truth regarding Alicia lands mostly on a functional level than anything else. It’s a beat with a turnaround that feels very artificial, like the structure was mostly to emotionally manipulate Kimihiko along with, potentially, the audience. And yes, all storytelling is emotional manipulation in some form or another, but as with so many other parts of Dead Detective that just barely managed to work, I have to presume the delivery was tuned significantly better in the original novels as they appealed to and built up a dedicated audience. As far as the anime experience goes, it makes this whole thing feel even more like a detour than it already did last week: A side-story articulating Alicia as a potentially-endearing concept, before pulling that rug out to confirm that we are still focusing on the conflict involving Hel here, after the writing jumped through all those hoops to get us to care about her in a slightly different context.