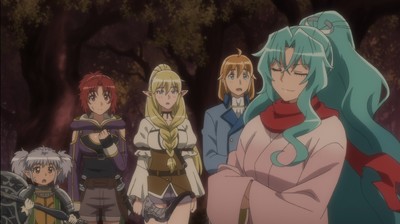 A question that I’ve been asking myself about Tsukimichi is, “How seriously does this anime want me to take its story?” I’m not normally the biggest fan of slice-of-life focused anime, but I can definitely get behind them when they have a really clear sense of style and tone. Similarly, I don’t need every serialized fantasy story to have world shattering stakes and larger-than-life battles every week, but I will quickly lose interest if there isn’t some amount of direction and payoff for the plot to be headed in. Lately, I get the feeling that Tsukimichi can’t quite tell what kind of anime it wants to be, and it’s made the viewing experience a little, well…odd.

Take the cliffhangers, for instance. Tsukimichi keeps insisting on ending its episodes with these weirdly placed little teasers that give the impression of a story that is trying to, you know, be dramatic and interesting on that kind of level, except then they end up not amounting to much of anything at all. Last week, Rembrandt’s ominous greeting of Makoto was revealed to be a (mostly) innocent mix-up that got resolved in seconds, and this week we find out that the big problem in the demiplane that got mentioned at the end of that episode turned out to be…a minor issue with how the orcs and lizardmen are being trained. Seriously? That’s it?

It would be one thing if we had any reason to be particularly invested in whether or not either tribe of beastfolk was up to snuff in the battle department. The audience has been given no evidence that their strength and skills are particularly necessary at the moment—it isn’t like the home base is under attack by a big bad villain every week, or anything—and since there aren’t any standout characters that could act as representatives of either group, they all essentially function as anonymous extras. It feels like one of those tropes of RPG-Simulator isekai anime that isn’t even being twisted or examined in any way, which has me wondering what the point is supposed to be. There’s the whole “Demiplane Ranking” tournament that Tomoe wants to set up between all of the local beasties, which could be fun, I guess, but Tsukimichi is so lax about its own plot that I can’t even tell if this is a story that we’re going to revisit sometime soon, or if it was just a one-off sketch that won’t ever be relevant again.

The training stuff certainly doesn’t get resolved this week, that’s for sure, since the second half of the episode is focused on the almost entirely unrelated efforts of Tomoe to train up Toa’s adventuring party. There are some slightly more interesting morsels to uncover with this story, since Tomoe’s observations of how Toa resembles Makoto’s gal pal from Earth makes me think that the show is building towards something. I also like how Tomoe ends up teaching the crew to function like your traditional MMO party, with the dwarf girl running as the tank for the elf’s ranged DPS and Toa’s close-up sneak attacks, all while the healer can focus on replenishing health and using some offensive magic for a change.

It’s the least original beat imaginable, but I’ve been playing a crap-ton of Final Fantasy XIV lately, so who knows, maybe I’m feeling more generous towards the cheap video-game analogue stuff. Still, I can’t help but wonder why Tomoe got relegated to this job on her own; Makoto barely has anything to do all episode, and you’d think that his real-world nerdery would make for prime educational material in these specific circumstances. If nothing else, I guess it allows Ayane Sakura to make more funny Tomoe noises.

And still I wonder: “How much are we supposed to care?” When the show leans into its comedy stylings, and focuses primarily on the interplay between its main characters, Tsukimichi can be a hoot. You might have noticed, though, that I didn’t even bother naming the non-Toa members of Toa’s party, and that isn’t because I don’t know their names (which are Ranina, Louisa, and Hazal, for the record). It’s just that, like almost every single character and story beat that Tsukimichi has explored beyond Makoto and his Monster Girls, I just can’t be bothered to give a damn about them. I want to say that the show still has time to make me give a damn, but we’ve only got a few episodes left in the season. It’s time to put up or shut up, Tsukimichi. Get us to laugh a little bit more, at least.