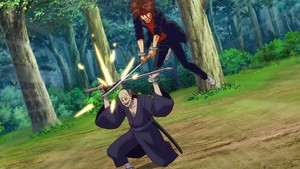 Well I certainly can’t complain about there not being enough payoff with this week’s episode of Battle Game in 5 Seconds. After all that laborious setup I was bothered by previously, things finally hit the ground running as the team battle gets truly underway, and we’re hit with like four big sections in sequence full of fights, revelations, superpower showcases, and even a few genuinely surprising swerves. None of it is especially outstanding, and there are definitely some pacing issues to all this stuff occurring, and what does and doesn’t yet get resolved as a result. But it’s at least delivering on the gimmickry of the show’s premise, and I even found myself compelled by a lot of what we got here! Mostly!

I talk about things kicking off here like it’s a straightforward sequence of fights, but that isn’t exactly how the action is laid out in this episode. Battle Game actually tries to get a little clever with its structure here, but as with so many other things about this show, that ambition may be outstripped by its ability. Effectively, we open on Akira meeting up with Rin to negotiate some sort of ‘exchange’ that we’ll get to see pay off later, then cut to seeing Yuuri rush in to save Asuka from Oogami. Then partway through the episode, we flash back to Akira and Yuuri before the meeting with Rin, revealing us the context of the characters by that point, then skip back over to follow Akira as he runs into his own fight. This should be a simple little shuffle of timed revelations, but the way the show places the cuts and fails to properly contextualize when and where in the timeline each part of the flashback occurs makes it just a little more needlessly confusing to follow.

The messy deployment of that delivery comes off like something that could have used additional drafts, alongside the problem of several of the fights and surprising plot points dropped throughout this episode simply being left hanging with no reminder or return for the remainder of the episode. It has the feeling of the writers rushing through the story to drop in each event as it happens with no regard for flow or audience-perceived payoff. Yuuri reveals that she may have the chops to take Oogami on his own terms, but we cut away before any kind of turnaround even starts. There’s a laborious cycle of fake-outs and double-bluffs regarding the much-touted spy among Team Green, only for villainous narration to end up just flatly telling us it’s that beady-eyed old lady, and we cut away before anything major happens with that plot point either. Even if there is a baseline enjoyment to be derived from all the crazy stuff piling up in the episode, it also creates a whiplash feeling where you go back and realize you kind of forgot about one part of the plot because it feels like the show already did.

That’s the structure doing itself a disservice, I think, because what’s here finally seems to have the components to work both as a battle-action show and a death-game story. After the jank of last week’s fight had me begging for the CG models to return, Battle Game happily indulged me and deployed 3D versions of both Yuuri and Oogami for their big throw-down, and you know what, it doesn’t look horrible! Having both characters match in the same shots means the choreography between them holds up better, and they even get the hang of switching in cel animation shots at opportune moments. It still hardly looks great, but at least it feels like I’m seeing the crew effectively patch over any rough parts instead of watching the anime disintegrate in real time.

Apart from the brute-force punch-up of those two, it also seems like Battle Game is finally getting to a place where it can experiment with applications for the powers. I know I dunked on Kirisaki last week, but that was before I knew he’d figured out how to turn spare splinters off his stick into tiny knives. I cannot believe this meathead has come up with broader, cooler applications for his simple ability than supposed galaxy-brain gamer genius Akira. Their fight, and the succeeding one where they team up against other stick-swordsman Rindou, doesn’t get the same luxurious CG treatment as the Yuuri/Oogami one, so we’re stuck with stiff cels, but there are enough shifts and surprises in it that it mostly works. It’s so briskly-paced that we almost don’t have time to realize that they never even actually revealed how Rindou was applying his power to slash sharp gusts of air at the duo, but Kirisaki ends him by jump-kicking a row of splinter knives straight into his head, so it doesn’t feel like a loss. And the whole thing ends up contributing to the overall analysis of Akira’s whole approach to this game, which was something I was hoping they’d finally find time to dig into.

Only a little surprisingly, the question of how Akira regards his supposed friends and allies is initiated not by any of them, but by Rin during his meet-up with her. It fits, honestly, as Rin is someone who explicitly seems to attach herself to others purely as a means to further her own survival. But even that portrayal proves to have more layers to it, in parallel to how we see that accusation at Akira being contextualized. I may criticize the formatting of the flashback to him and Yuuri, but it is effective to find out afterwards that they had their spat as a result of Yuuri asking the same question I had for weeks: Does Akira see her as a genuine friend and ally, or merely as a tool he can utilize for his own overall victory? Akira doesn’t have an answer, though to me, a lot of his internal dialogue on the subject suggests he intended to only use everyone with no emotional attachment, but may now find himself catching feelings in spite of himself. Though on the other hand, the way he manipulates Kirisaki into the team-up comes off like Akira making an effort to tell himself he’s maintaining his chessmaster role. Broaching the subject at all is a good sign of Battle Game‘s interior efforts, but now that the question is fully out in the open, they really need to get around to actually addressing it, lest we feel like we’re getting jerked around as much as Yuuri thinks she’s being manipulated by Akira.

On the other side of that deal, we have Rin. Funnily enough, she was another one I dumped on previously for not finding her all that interesting, but she also picks up surprisingly in this episode. Far from being someone who simply furthers her own successes by attaching herself to people in power, we find out she’s decidedly more active in how she continuously hedges her bets. At this point in the story, she’s set up a situation where she’ll theoretically be counted among the ‘winning’ team regardless of which color comes out on top, and it’s legitimately fascinating to see that thought process come from a character they’d gotten me to previously dismiss the machinations of. I found that more impressively interesting than the full showcase of her powers (“Make torture devices from bodily fluids”, which seems…broad) against the three-car-pile-up of what Renka’s deal turns out to be. It could be because the latter ends up being something of an anticlimax, as Renka, who was hyped up as a legit rival to Rin and even gets her own spot in the intro, goes down pretty quickly in this episode after exposing a powerset that seems needlessly complicated for all this. In the end, Renka’s role in the story is to be offed as a showcase of Rin’s machinations and threat level, so did we really need a last-second explanation of her being a puppet created by one character being controlled by another character, both of whom are pretty dead now, apparently?

Like with so many of the stop-shorts and extraneous element introductions in this episode that feel like they could have waited until next week, these bits are a sign that Battle Game could probably work that much better if it would only get out of its own way. But through all that flailing, I still found some entertainment value in its antics and appreciated the way it addressed some of the ideas of its characters I’d been waiting for it to get to. By this show’s standards, I can mostly call that a success.

Episode 10 - How a Realist Hero Rebuilt the Kingdom