Episode 9 – Higurashi: When They Cry – SOTSU 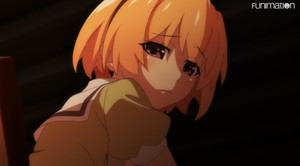 A wrench is thrown in Satoko’s plans this week as the remnants of her humanity struggle with the guilt she’s feeling while the “witch” part of her wants to continue stomping across her relationships. We also learn how Ooshi became involved in the inevitable tragedy likely to unfold next week and why.

Satoko didn’t consider Teppei’s change of heart, at least not beyond her ability to manipulate him. Satoko’s game plan was to play both sides; put on a performance for her classmates in order to induce pity and a protective nature, especially from Rika. Meanwhile, in order for them to believe she was really under threat, she needed Teppei around and defensive to play into villagers and her friend’s preconceptions about him. For this to work though, Teppei needed to not go off script and that’s exactly what he did this week. Her uncle comes across Ooshi while out shopping and sees it as an opportunity to report the “bullying” Satoko has experienced.

In Teppei’s mind, the calls to CWS are part of the bullying and he hopes that by showing Ooshi their home and explaining things that it’ll put a stop to the whole mess. However, I think Satoko always intended to let her classmates succeed to ensure that, through her concern and pity for her, Rika won’t “abandon” her again. Teppei has essentially upended this plot because if the scenario fails, Satoko will be outed as a liar and likely be truly outcast.

I think it’s also worth noting that while in this particular timeline none of the things that Satoko are claiming are true, that doesn’t mean she never experienced them. This might be why she’s able to feel justified in her actions now. The episode opens with footage of a past timeline where Teppei did beat Satoko repeatedly. We also know from last season that Satoko was ostracized by the village at large because of her family. I would agree with her that she was “bullied” in the past by the village, even if the exact actions she’s laying out for Teppei aren’t what happened then or now.

The next episode will be particularly interesting from Satoko’s perspective because I’m not entirely sure what she thought would happen by injecting Ooshi. His paranoia is rooted in his strong drive to get justice for the manager of the dam construction project who was dismembered. The paranoid Ooshi appears to hold the Hojos and Teppei responsible to some degree and starts going about town to frame Teppei for things in order to make him a potential murder target for the night of the festival. I’m honestly not sure why Ooshi targets Teppei in particular, as the Hojos were considered to have sided with the dam project and it’s usually the Sonozakis who are suggested to be responsible for the murder. Ooshi is also playing to Teppei’s trust here before immediately doing things that will likely get CWS involved.

The End(s) of Evangelion EXPLAINED