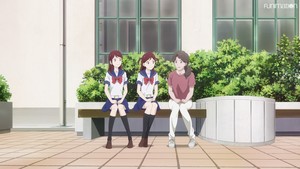 Oh boy, oh boy, oh boy, it’s a festival episode! (Or at least the first half of a festival two-parter!) Seems even Kouka isn’t excluded from a trope-laden school festival event, especially if it’s a grand sports festival! It’s all the more special, too, because this is Kouka’s centennial: it’s the celebration of celebrations, and this means that all of the students of year one will be getting festive… with their seniors.

The bulk of this episode is a mix of the girls (and myself) fangirling over the top stars, prep for the sports festival, and of course, the festival itself. But that’s not all that happens because remember, this is a school for performers, which means that the girls will also put on a halftime short of sorts, and this is where we circle back around to episode 9’s title, “The Two Juliets,” Chiaki and Chika Sawada.

You see, there’s this tension between the twins, which is something I kind of picked up on in episode 6, waaaaaay back before summer vacation. It only gets worse when Chika is mistaken for Chiaki, and when we get the backstory on the tension between Chika and Chiaki concerning their previous attempts to both get into Kouka. This tension is, of course, broken by Sarasa stepping in, but it isn’t resolved, which is really what stayed at the forefront of my mind this episode.

Much like in episode 6, Chika is still suffering under the shadow of her sister, who can be quite the forceful person. When this comes to a head, words get said: Chika laments giving up her chance at Kouka to wait on her sister to join her, which results in them splitting. It’s been a long time coming, and the following avalanche of emotions and a silent treatment fight felt really raw and impactful. The payoff at the end of the episode – a reconciliation and a stronger bond between the twins – feels authentic because of this, and kudos to Kageki Shojo!! for pulling it off.

While I don’t have siblings, I have to commend Kageki Shojo!! episode 9 for its depiction of the tension between Chika and Chiaki. It’s clear that there’s a lot of sore feelings between the twins, and while they might not mean them in earnest, the words said as they were lashing out still hurt. It’s also another good character study complete with setup, climax, resolution, and payoff, and just like Kaoru’s episode last week, it’s really, really enjoyable. These are the parts where Kageki Shojo!! truly excel at.

Speaking of the ED, that’s something I’d briefly like to mention this week. If you haven’t noticed by now, the ED changes week to week, albeit in very minute ways. The song itself is the same (but sung by the VAs for the twins) but the animation changes to the focal character. For example, in episode 2, it was the girls of year one with a focus on Ai and Sarasa. However, in episode 8 (last week’s episode) it was Kaoru-centric with her VA taking front and center with rich, powerful vocals. In this episode, the focal characters are the twins, and gosh: their ED sequence is lush, to the point that it’s almost too opulent, which kind of matches the grandiosity of Kouka and IRL Takarazuka as well. Just something to keep an eye out for in case you haven’t already been doing that.

Additionally, another tidbit I noticed during my watch is that Ai’s hair is growing; or rather, Ai has started to let her hair grow back out. This is, of course, parallelled against the opening where she has quite long hair: almost the same length as when she was a child. It’s kind of a blink-and-you’ll-miss-it detail; I think it only becomes apparent when you see Ai head-on, and once you see it, you really start to notice it this episode. I’m truly looking forward to the day that her hair is as long as it is in the OP in show.

All in all, episode 9 is a great episode with a lot of general setup for the actual sports event itself. There’s more drama because this is a shojo drama, but I fully expect to see it resolved in episode 10, especially since we’ve only got a scant three weeks left with Kageki Shojo!! before whatever comes next. Hard to believe that we’ve got so little time with these splendid girls: hopefully, this cour won’t be the last.