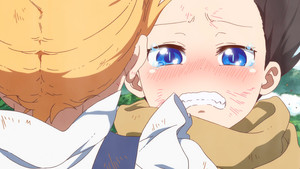 Logging into work on Thursday to once again be brought to near tears by a dragon office lady. “There Are Various Reasons Behind It (It’s Full of Elma)” is, like the title suggests, packed with high quality Elma content from start to finish while also running the full gamut of emotions. This episode was crafted from start to finish for me personally and I will gladly take it.

This first segment returns us to Kobayashi’s workplace and, seemingly out of nowhere, Elma takes it upon herself to liberate her fellow colleagues from an overworked life and attempts to establish a healthy work-life balance. Yes, she’s technically pushed by self-serving motives (chocolate), but the end result would be less overtime and better regulated working hours plus early closing time on Fridays. After having multiple proposals squashed by upper management due to both legitimate business reasons (finances, specialized knowledge needed) and illegitimate ones (deftly used logical fallacies), Elma even goes so far as to attempt to start a union. Unfortunately, it doesn’t go anywhere.

I was surprised to see this segment in the anime at all because it touches on multiple issues with the Japanese workplace. Kobayashi and Elma don’t work at an anime studio, but overwork is an issue throughout the business sector in Japan; it isn’t limited to animators. The episode even drops the term “Premium Fridays,” a reference to a campaign first proposed in 2017 to end the workday at 3pm on the last Friday of each month in hopes to both bettering work life and promoting shopping since this is when most workers are paid. Kobayashi mentions it as something that might finally happen because, despite the government’s proposal for it, only 37% of major businesses switched to the schedule or had plans to adopt it. Those numbers are based on a survey in 2017, so I can’t say how many companies followed through and are still recognizing to Premium Fridays.

We also get a quick rundown on how hard it is to change this culture where efficiency from the smallest workforce is prioritized over those employee’s own happiness. Change is slow and even with Elma’s amazing tenacity, I’d also argue that her failure doesn’t only rest on company’s exec (who happens to be Shōta’s dad, an intimidating mage) but on Kobayashi herself. At least the attitude she represents. True to her character, Kobayashi doesn’t really get worked up often about anything. I wouldn’t go so far as calling her pessimist or a cynic, but she very much has an approach of “I’ll believe it when I see it” and is open to being proven wrong but doesn’t believe she will be. Also, likely unpopular opinion, but her willingness to go along with her company’s work culture hurts her fellow employees. Her statement that she can’t relax unless she works eight hours and her general “eh, it is what it is” approach kinda sucks.

Kobayashi, get a hobby and detach your identity and value from your job, I am begging you. Elma’s only reason for pushing for change is because she wants to have the time to get limited edition chocolates in the evening and you know what, she deserves that. We all do. If you look forward to getting home and unwinding with your favorite TV program in the evening, you deserve that. You shouldn’t be called in on your day off to do more coding (crunch, anyone?) because the job needs you. Otherwise you miss out on the things that actually matter, like taking your kid camping.

The third segment comes almost out of nowhere but it serves as the emotional climax for Tohru and Elma’s relationship after we learned they travelled together in episode 5. This entire segment is a showstopper from start to finish. Elma and Tohru battle for what is initially proposed as “exercise” but it quickly becomes clear that this confrontation is Elma’s way of working through her feelings of betrayal and admitting the importance of her friendship with Tohru. I wouldn’t have expected this segment to work since it felt detached from the rest of the episode, but everything was so expertly animated it was like a double whammy of emotional and physical impact. I really hope KyoAni does an action-oriented series next because the direction here is insanely good.

This episode like an anime Neapolitan ice cream bar, I got my emotional, action, and cozy requirements all satisfied at once.

Story of Seasons: Friends of Mineral Town Game Launches for PS4, Xbox One in West in October - News