Home » Episode 9 – My Next Life as a Villainess: All Routes Lead to Doom! X
Anime

Episode 9 – My Next Life as a Villainess: All Routes Lead to Doom! X 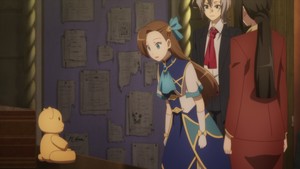 This week on My Next Life as a Villainess: All Routes Lead to Doom! X, yet another person gets kidnapped. It really makes you wonder about what kind of security the kingdom of Sorcié has, because I do believe that we have reached ridiculous…and those up to date with the English releases of the light novels know that kidnapping remains the crime of choice in the most recent volume as well. But thinking about it, it really does make for the most serious crime that’s scary but not necessarily nightmare-inducing for the [book] audience, one with high stakes but could result in torture and death but isn’t on the same level as, well, torture and death. Plus it’s a great excuse for a road trip!

More seriously, Keith actually does seem to be in much more danger than previous kidnapping victims. We don’t know who the creepy giggling girl with the blank eyes and scary smile is, but Thomas we know to be vicious – he’s one of the half-brothers who bullied Keith horrifically before he was taken in by Catarina’s parents. As someone who experienced terrible bullying, I can assure you that just the sight of your tormenter can be terrifying, and that Thomas has clearly not gotten any better with time has to be the stuff of Keith’s nightmares. Worries about someone else snatching Catarina away aside, he’s been living a dream life filled with people who love him. To have that ripped away and then to come face-to-face with the author of his torment has to be shattering – and we already know from his inability to call Thomas’ mother something mean and just walk away that these people do have a psychological hold on Keith.

So clearly the last thing that we need is Catarina’s mom believing the obviously fake letter and blaming her for Keith’s disappearance. It really says how little she knows him if she can buy that garbage, something that pretty much no one else does. As Geordo and Sora point out, if he’d really run away, wouldn’t he have taken things like clothes and his dearest possessions, especially when they’re all packed in a small box on his desk? Catarina’s worried, but it’s Geordo and Sora who seem to realize that something’s really wrong. It probably says something about them as basically good people that they’re so gung-ho about helping find their competition for the girl, especially Geordo, although he did think that he was already three-quarters of the way to winning for a bit there, so that may also be a factor. Everyone always underestimates the power of Catarina’s (willful?) obliviousness…

At this point I do think that part of what she’s doing is convincing herself not to notice things, although she may not be aware of it. The conversation she has with Keith about how if she marries Geordo she’ll be a royal leans in that direction – even if she did have romantic feelings for the prince, the fact that he is a prince is a problem for her. In her mind, if she can’t hack it as the daughter of a duke, she has no chance of making life as a princess or queen work. If the royal family didn’t also contain Jeffrey this argument may hold more water, but Catarina’s worries and fears are real enough. In many ways, she’d be best off with someone like Maria or Sora, out of noble life forever.

But for now all of that is on the back burner, because she’s growing increasingly nervous the longer they go without finding Keith. Interestingly enough, Search and Rescue Teddy Bear Alexander doesn’t appear to be making her feel all that much better, possibly because the bear keeps giving her side-eye when Larna isn’t looking. Can a vaguely creepy teddy bear possibly help Catarina find Keith? Who is that creepy girl and why is she working with Thomas? And most importantly, if Catarina finds him…will Keith have the guts to say something at last?

Episode 9 - The Case Study of Vanitas