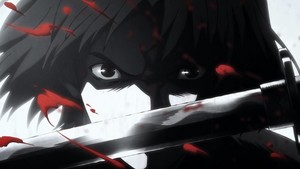 The only context we actually get for the order placement of this week’s Peach Boy Riverside comes at the very end, framed as it is as a dream by Mikoto who’s seemingly still asleep following his attempted battle in last week’s episode, which is only a little funny to me. The rest uses that narrative device for a full-length flashback to how Mikoto met…Mikoto! The original holder of his name we’d seen alluded to before, who might also be the actual mythological Momotaro, and the origin of those Oni-slaying eye-powers. That’s all conjecture based on imagery though, as Peach Boy Riverside seems less interested in elaborating on its lore so much as simply adding to it. That’s not necessarily a bad thing, since I’d be far less enthused by rote-world building than I am in the story articulating what it means in more of an idea-based sense. To that end, this week’s episode does have some of that as a focal point, if as contentiously conceptualized as anything else the show’s done.

Proto-Mikoto, or ‘Hiko’ as the episode quickly establishes we can call him for simplicity, is one we’re just dropped in with at the outset here. It’s to the point that if you didn’t recall the previous momentary allusion to this guy’s importance in ‘our’ Mikoto’s backstory, you might be forgiven for thinking you’d just started a different Momotaro-themed anime. It plays it well enough, particularly in the visuals department. The action in this turn for PBR is stylishly-framed, and has some decent bursts of animation where it really counts. Perhaps it’s also only being buoyed by the film-grain filter slapped over the whole thing, but the net result is that this feels like the best the show has looked in weeks. So even as we’re only slowly coming around to how this connects to the story we’re ostensibly following, it’s easy to get into it as a well-presented take on the classic Momotaro journey.

Hiko’s Oni-slaying quest is only half the story though, of course, and the complexities brought on by formally introducing the boy-who-will-be-Mikoto are where things get interesting, if a bit fraught. The big surprise is that Mikoto is in fact a half-Oni himself, his father being another case of an Oni who took a human bride but then, gosh darnit, just couldn’t help himself and ate her one day. The fact that this bit is now a recurring element in PBR rings only a bit disconcerting for the broader themes it’s supposedly driving at. The possibility of future reconciliation and understanding between the species just comes off as significantly less hopeful when we know that Oni are physically incapable of stopping themselves from messily murdering even their most precious loved ones.

It’s that troublesomely depicted absolutism that seeps into what’s supposed to be a clarification of Mikoto’s own motivations we’ve already seen. With this, his uncompromising racism towards the Oni for their crimes against humanity is itself an internalized hatred of himself for the species-based loathing his home villagers projected onto him for said Oni crimes. It’s at least a technically more nuanced categorization of his character than simply making him a misguided massive racist, but it doesn’t make Mikoto’s motivations for the story as we’ve seen it any less messy. He’s still positioned as an extreme outlier to Sally’s quest for understanding between the races, though now we can consider how that could be better resolved with Mikoto coming to terms with his extremely messed-up past.

The presentation of that forms the most interesting through-line we can follow Mikoto on for this episode, even if things wind up feeling just a bit cynical and edgy for their own sake, as PBR is wont to get. Mikoto’s backstory could have been as simple as him navigating his conflict in internal loyalty to his original father versus the man who killed him, but instead that’s simply framing for those internalized self-racism issues. Rather, the story seems to settle into the idea that someone saddled with a miserable life needs an outlet, a person or group to hate in order to channel that and continue forward. That feels like an excuse for Mikoto’s nature, an excuse too many people with real-world prejudice settle on which itself clashes with the show’s own already-clunky anti-racism messaging. Granted, this is definitely being presented as a temporary, possibly even misguided patch on Mikoto’s worldview, potentially mitigated by him properly letting Sally into his life in the future. But in the moment, it’s mostly designed around explaining a lot of Mikoto’s more unsavory and unnerving character elements in a way that’s supposed to come across as sympathetic. And whether that actually works is almost certainly going to be down to the individual viewer and their own relation to his past experiences.

Contentious framing aside, this still feels like the most cohesive, consistent episode of PBR in ages. That’s certainly due in large part to its outside-context story placement, being an episode where I could really just sit back and enjoy the show. But as I said, there’s just a little extra visual polish they put on this one to sell the style of it, and its existence as an isolated incidence lets the concept work feel complete, as opposed to me needing to calculate where in the broader character context this is even supposed to be occurring. So even as I disagree with a lot of what this episode is saying regarding worldviews, I still come away appreciating it simply for being effectively coherent. That may seem like a low bar, but that’s where navigating the maze of Peach Boy Riverside for nine weeks has left me.