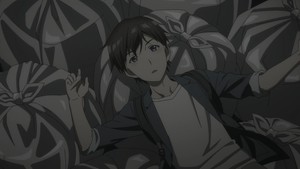 Even considering the fact that this is a show that’s ostensibly about time travel, the start of episode 9, “Showing Off,” is… a lot. It’s just that that aspect of the plot hadn’t kicked in since very early on, and now Kyoya’s married to Aki with a daughter named Maki. It’s weird, and I don’t like it, and Kyoya doesn’t either, largely because it’s confusing. It’s ironic to think how the time skip – or “time slip” as Kyoya calls it – mechanic was once the most interesting thing about Remake Our Life!, but now it’s actually a drag, though this episode seemed determined to make me care about it by infodumping a lot of things over the course of its 24-minute run.

Episode 9 has this “recap but not a recap episode” energy that dissipates the really solid momentum Remake Our Life! had been building in the past episodes with some playful BGM and a whole bunch of characters we’ve never met, and my girl, Eiko. Perhaps if the novels were localized (cough cough do it for the fans Seven Seas cough cough) then I’d have been a whole lot more invested in this, but as it stands, episode 9 feels like the premiere episode in a lot of ways, which I’m not a fan of.

Well, okay, that’s not entirely true: what I didn’t like was the front half of the episode. It doesn’t offer much outside of a weak infodump and showing us characters that we have no investment nor interest in, and just echoes some of the weakest parts of the premiere. The back half, however, is much more interesting, and I suppose that’s where the meat of my review will be.

Last week, I took Kyoya to task for overmanaging Team Kitayama in the final stretch of working on their doujin game. He essentially manhandled the entirety of the back end of the project, taking the reins from each of his friend’s hands to create a game that would do numbers and be a success. And it was a success… at the expense of him creating a future where Tsurayuki, Nanako, and Aki all stop creating games. Of course, we only saw that future last week with Tsurayuki: the reveal that Nanako and Aki have stopped as well come this week, and they feel like dual gut punches.

Basically, despite ending up with a loving family and a solid job, the Platinum Year that Kyoya so yearned to be a part of is gone, through no fault but his own. Like I said last week, I don’t think Kyouya had bad intent or acted maliciously, yet his actions still have consequences, and now this alternative, future version of himself is reaping what he sowed. It is horrifically soul-crushing to see Kyoya drunkenly heave himself onto a pile of trash as he realizes that he messed up again, only there’s no way for him to blink and wake up in the past this time. He’s gotta live with this future, and it’s all because Kyoya crushed his friends’ passions in his determination to sculpt a specific future.

Despite this episode’s weak start, the “twist” of this new leg of the time skip is really impactful. It hurts to see Aki smile and embrace Kyoya, the man who ruined her future. It aches to see Nanako giving one final livestream performance, because Kyoya crushed her creative drive. Even with the otherworldly aspect of the timeskip, the sense of melancholy that these scenes evoke feels palpable and authentic.

Still I… hmm, I think it’s safe to say that I’m back in that nebulous place of, “What the heck is this show trying to do, and where the heck is it going?” Only this time, I’m really invested and not as wishy-washy as I felt waaaaaaaaaaay back in the premiere, in large part because I have a hunch that Remake Our Life! is building towards a commentary on the nature of creativity and creative drive. And while I’m the human embodiment of the Metal Gear “Alert!” sound effect right now because of the second timeskip, I’m even more intensely curious about how Kyoya’s story is going to end, as well as the stories of everyone who made up the group once known as Team Kitayama.

Remake Our Life! still feels good, even though it’s taking a really different direction this late into the season. It has this intense humanity about it, and while I lament the fact that we lost a lot of episode 8’s momentum, I also think that whatever the series is building to in its final episodes has the potential to be just as powerful as what we’ve witnessed thus far. I think that’s why it’s easy to still see episode 9 as worthwhile in the end, even if the front half is lackluster. It is setting up a lot of neat emotional stakes: I can only wonder where we’ll go from here.

Episode 10 - The Case Study of Vanitas

Episode 5 - The Great Jahy Will Not Be Defeated!