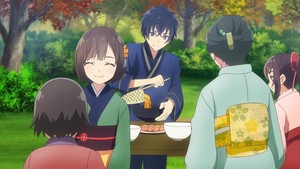 It has suddenly occurred to me that I have exactly no sense of how time passes in this show. That’s probably because it doesn’t really make the effort on that front; Rio hasn’t changed appreciably in his appearance or mannerisms since he hit about twelve, and he’s not the only one – none of the recurring female characters seem to have either, and it’s apparently been two years since he last saw Latifa and that whole crowd. While we can make allowances for different types of people (nothing says that elves, dwarves, and people with animal attributes age at the same rate as humans, and in fact plenty of fantasy literature says the opposite), it all just makes it feel like the show is happening in a sort of timeless void, where seasons come and go and virtually nothing changes. I have a hard time believing that Rio hasn’t grown in any way in the two years since he last put on his Kirito coat, but you wouldn’t know it from the way it fits him.

As far as plot goes, this episode feels a little thin. It is good that Rio’s finally told his cousin that they are, in fact, cousins, and honestly I don’t think she or his grandmother really expected him to stay forever. Sayo is another story entirely, but her reaction goes too far in the other direction – yes, she had a crush on him, but were her feelings really so strong that she’d collapse crying two separate times? Apparently so, but apart from the bits where he buys her the hairpin and saves her from the thugs, there really hasn’t been a whole lot of their relationship that we’ve been privy to. Given her reaction to the news of his departure, it feels like we’ve missed too much. While that’s not necessarily unexpected, it does devalue her feelings, lumping her in with the not-servants from the Spiritfolk village, and making her just another poorly-defined female character who has a thing for the male lead.

That said, I do very much appreciate the “oh, shit” look on Rio’s face when she’s confessing to him. Whether it’s because he’s surprised or because he was just really hoping she wouldn’t do this isn’t clear, but the expression of dismay is very well done. Likewise, Shin’s investment in his sister’s happiness is nice; we know that he’s not exactly Rio’s biggest fan, but he is still willing to put his own issues aside in order to try to make Sayo’s life happier. He does realize that it probably won’t work, but the fact that he makes the attempt anyway is very sweet. In fact, it’s almost a more rewarding moment than the reunion with Latifa, which feels kind of undercut by the rapidity of the story’s unfolding. When you’re scrambling to get through the source material as fast as possible, lovely moments are some of the things that get left by the wayside. I suppose I should be glad we didn’t get an overwrought harem reunion.

Fortunately for the remaining episodes, I think we may have gotten to where the story was desperately trying to reach. Rio’s awakening the morning after his return to Latifa is heralded by a naked pink-haired girl in his bed – a pink-haired girl who looks suspiciously like the one he saw in his vision back when he first arrived several years ago. Could she have manifested in order for us to find out what’s behind his reincarnation (or whatever it is) from Japan? That would be a good sign, paucity of remaining episodes notwithstanding, because it would at least allow the series to finish things out with a few solid answers. Since, unlike some other series, the point does not appear to simply be Rio gallivanting around a fantasy world collecting girls, now really would be the best time for us to learn the truth, and a solid enough handling of it could bring the show back from the brink – although at this point that “brink” is between mediocrity and plain not-goodness. I hope it can, because it feels like at this point the series may be an insult to the books it’s adapting, and I love books too much to want that to turn out to be true.