Episode 9 – The aquatope on white sand 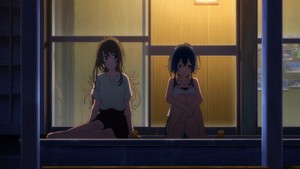 At first glance, episode 9 seems like it’s taking the story in a predictable direction by introducing Haebaru Chiyu, a young woman from a rival aquarium. Chiyu and Kukuru butt heads, both as representatives of aquariums of contrasting scale and ambition, and as young women of differing ages and experiences: Chiyo’s a young woman out of college, while Kukuru is a passionate teenager. And sure enough, Kukuru is determined, in a very teenage way, to dislike Chiyu, though Fuuka takes her to task over it.

Kukuru’s antagonism is understandable. Chiyu represents everything that Gama Gama is not: she’s from a stylish, slick new aquarium that sits in the city center, and turns her nose up at the thought of going to a “failing” aquarium. Chiyu and Kukuru’s tenuous work relationship is a showcase of this episode, but what I really want to focus on with this review is Chiyu herself, because so far, our viewpoint characters have mostly been kids—okay, teenagers, but kids nonetheless.

Chiyu is clearly a twenty-something fresh graduate. Because of this, she is determined to get as much knowledge as she can from Kukuru’s grandfather, who’s known as a skilled aquarium director. Except Kukuru’s grandfather isn’t what Chiyu imagined a successful aquarium director to be like, which is a subversion because he actually is: she just can’t see the forest for the trees. She can’t see that him talking with guests is what draws them back, that the simple fact that guests want to clean up shows their attachment to the aquarium, that the kids playing cards can name a number of fish. She misses all these details because of her ambition, and her desire to make all the hard work she did to get to where she is worthwhile. And in the end, she moves on from Gama Gama (at least for now), not having learned much of anything other than surface knowledge.

And that’s why this episode is interesting: it’s a very candid look at why Chiyu hates being at some rinky-dink aquarium. The problem doesn’t lie with Gama Gama itself; it’s that she doesn’t want to lose her chance to climb up in rank and be seen as competent. And as a woman (well, a non-binary woman, but someone who’s perceived as a woman), I completely understand. Nothing is easily given to you when you’re a woman, or at least rarely without caveats. Chiyu doesn’t have time to get caught in that, but as a young woman in Japan, it’s inevitable that the rigmarole of being a working woman will eventually butt up against her desires to use her degree. While episode 9 doesn’t go too in-depth with that, it’s clearly a concern on her end. It’s even pointed out in the show: there’s a limited number of aquariums in Japan, and only a few are hiring. Chiyu has to be the best of the best, the cream of the crop, if she’s going to get the job that she’s worked for. It is, in many ways, starkly different from Kukuru’s work in a family-owned institution. Yet Kukuru’s work is no less important, which is something Chiyu could never understand based on where we leave her in this episode.

Side note, but I found it fascinating that Chiyu bears a passing resemblance to Fuuka. At the very least, episode 9 seems to draw a lot of parallels between the two. I don’t have much to say for now other than “something something two sides of the same coin,” but I look forward to her inevitable return and what she brings to the story next. For now, it’s really nice to see the show shift away from Kukuru and Fuuka’s dynamic to show how Kukuru interacts with a different young woman. Of course, that’s not to say that there’s no Fuukuru / Kukuuka content this week, but since that’s not what I felt was important this episode (not to mention how it’s waaaaaaay too hot outside and I can’t summon any queer thoughts), I won’t repeat my frustrations with the show’s framing of their relationship here.

All in all, it’s another solid week at the Gama Gama Aquarium, and while there’s still a long way to go before Gama Gama is even close to being saved… I still don’t think this is the end for it. I think that we’ll see Gama Gama make a strong comeback: maybe not to its former glory, but to something just as important and impactful to the community. I really hope that Chiyu will somehow end up back at Gama Gama next week: episode 9 certainly sets her up for a return, where she’ll probably need to eat a big ol’ slice of humble pie. For now, I’m fairly content to just wait and see where all of the plot threads from this week—including Fuuka’s call at the end of the episode—go.