Episode 9 – The Case Study of Vanitas 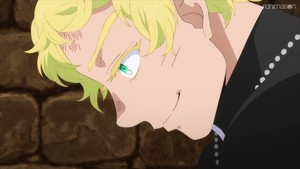 I said last week that there is nothing scarier than a fanatic. This week it’s still true, but also worth remembering that that’s where the idea of being a “fan” of something comes from, because our pal Roland is definitely a little bit of both, possibly even verging over into stan territory when it comes to Vanitas. He seems to recognize the other man the minute he hears his name, and that leads us to the fact that he very likely did know a younger Vanitas once upon a time – because before he became the somewhat frustrating man we know, he was intended for the church, in the Chasseur sense, of course.

Vanitas’ backstory almost takes us into Vampire Knight territory, what with his parents having been killed by vampires and all. That he was brought into the church instead of being turned is more a mark of how the two series differ in their vampire lore than anything; what’s more interesting is that Vanitas didn’t complete his training but instead ended up siding with the vampires. The reason for that makes a lot of sense when we hear that he “caught the eye” of a scientist working with the Chasseurs – trust me, you’d rather catch the eye of Victor Frankenstein than Dr. Moreau.

Yes, I do think we’re talking about that Dr. Moreau, the one with the island in H. G. Wells’ 1896 science fiction novel The Island of Dr. Moreau. One of literature’s great mad scientists, Dr. Moreau was a vivisectionist working on splicing humans and animals together to create a new race of beings he called Beast Folk, and possibly accidentally creating furries in the distant future. Since we already know that the Chasseurs inject a special drug into their systems that gives them enhanced strength, it’s not really a stretch to assume that this is what the good doctor was doing before he escaped to that island in the Pacific where Edward Prendick found him, and actually that lines up pretty well with the time the show is set in. It was Moreau that turned Vanitas into a vampire ally, which implies, even without next week’s episode’s French title of “cicatrice” (scar), that Moreau showed him that the real monsters are the humans.

That’s something that clearly never occurred to 99% of the humans in this show. It isn’t hard to see why – vampires go out of their way to blend in most of the time, so the only ones humans are likely to realize they’re encountering are the curse-bearers, who are too far gone to control their bloodlust. It’s an interesting statement on vampire lore, because it implies that most vampires really aren’t a threat – they’re just like the majority of humans, people. It’s only when they’re essentially rabid that they’re a problem. But if you only ever heard about or met dangerous vampires, then that’s what you’d think all vampires were. It’s this assumption that seems to have created the animosity between the two races, and like with most things, the fanatics took it too far and ruined human/vampire relations for everyone.

All of this makes Roland’s shock and delight at Noé’s intelligence and reasonableness both a lovely surprise and cause for alarm. Does he truly accept that Noé is, for lack of a better word, a person and all that implies, or is he treating Noé like a dog who can shake hands? He does seem to be upset that Dr. Moreau is still around, which could mean that he understands that Moreau is much more of a threat than Noé. But Roland is a true fanatic – his crazed smile, the glow in his eyes, and even his cheery way of speaking all point to him having very much imbibed the Kool-Aid that the church was offering. He could simply be going along with Noé because it gives him access to Vanitas, who can lead him to Moreau. (And more time with Vanitas means that Roland may think he has more time to win him back.) This truce may be of shorter duration than it currently seems, although that likely depends on just how twisted this version of Dr. Moreau is…and how much Vanitas’ past experiences with him will make him vulnerable when that’s the worst thing that he could possibly be.

Episode 9 - My Next Life as a Villainess: All Routes Lead to Doom! X